A cancer lawsuit is a type of personal injury lawsuit brought by the plaintiff against an individual or company that caused injuries due to their negligence. The most common types are medical malpractice, asbestos-related mesothelioma and wrongful death cases.. 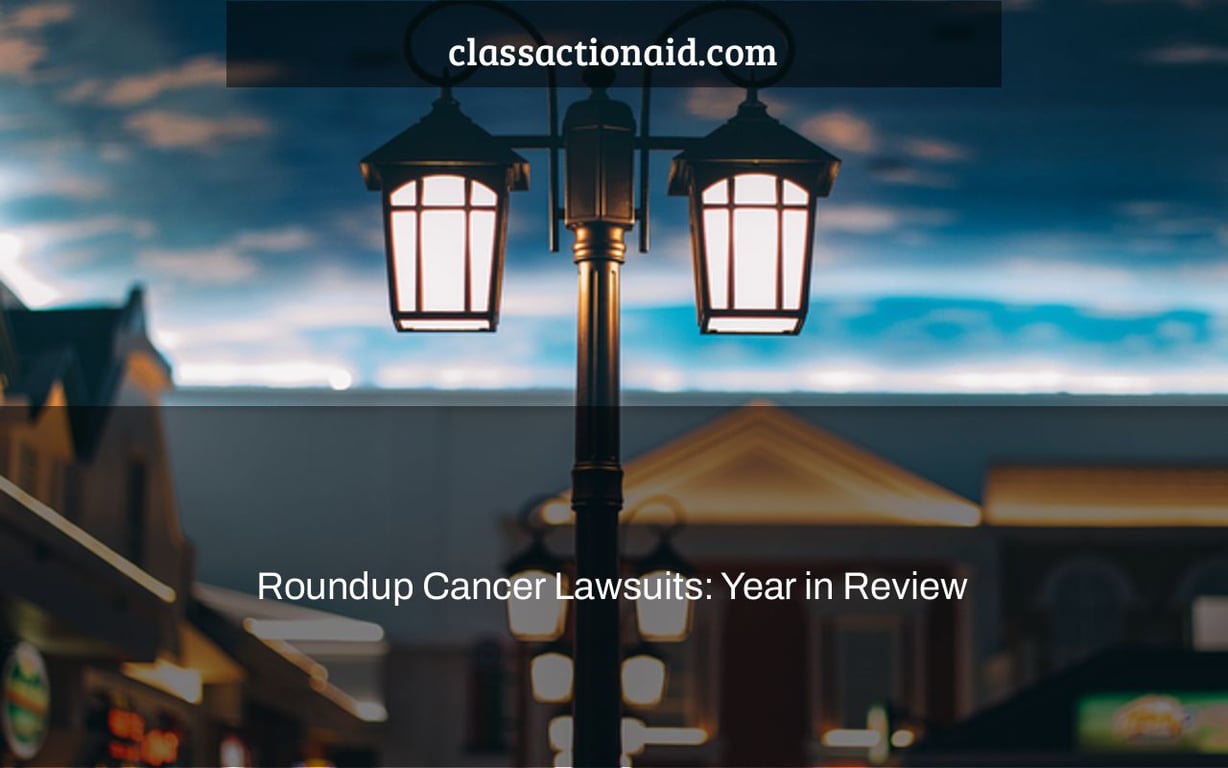 Glyphosate, the major active component in Roundup weed killer, was one of the year’s most talked-about legal issues.

The number of cases filed in the United States claiming that Roundup weedkiller causes cancer has more than tripled in the last year, rising from 10,000 to 42,000. Two of these instances ended up in court. Bayer was found accountable for the plaintiffs’ non-Hodgkin lymphoma in both cases, and was sentenced to pay large sums of money.

Bayer has yet to win a cancer claim involving Roundup. The company’s stock continues to fall as losses mount. Bayer, on the other hand, shows no signs of lowering its fortifications. It claims that glyphosate, the world’s most commonly used agricultural herbicide, is cancer-free. Bayer has also successfully petitioned various courts to reduce the amount of money awarded to claimants.

Looking forward to 2020, Bayer seems to be hoping for a turnaround when litigation moves to St. Louis, where Monsanto was based for decades until Bayer purchased the firm last year. Regardless of how the courts decide, public opinion is trending against glyphosate, with towns, counties, states, and nations throughout the globe restricting or banning the herbicide due to health concerns.

France removes Roundup Pro 360 off the market in January 2019.

After a court decided that products containing glyphosate are probable carcinogenic, French authorities declared a ban on the sale, distribution, and use of Roundup Pro 360, withdrawing its authorisation. When the French food and environmental safety regulator ANSES approved the use of Roundup Pro 360, an administrative tribunal in southeast France decided that it should have given greater weight to possible safety hazards. The European Union has extended the use of glyphosate until 2022, while French President Emmanuel Macron has committed to phase out the chemical by 2021.

Glyphosate and Lymphoma are linked in a new study published in February 2019.

According to a University of Washington research, glyphosate exposure may raise the risk of non-Hodgkin lymphoma by up to 41%. The study was based on a thorough examination of current scientific literature, as well as a survey of more than 54,000 licensed pesticide applicators. “As a consequence of this research, I am even more certain that [glyphosate is carcinogenic,” stated senior study author Lianne Sheppard.

In March of this year, a Roundup cancer plaintiff was awarded $80 million in damages.

The first federal trial over Roundup, Edwin Hardeman v. Monsanto Co., resulted in a $80 million award for plaintiff Edwin Hardeman. For over three decades, Hardeman employed Roundup on his California ranch. In 2015, he was diagnosed with non-Hodgkin lymphoma and had six rounds of chemotherapy. Roundup constituted a “significant cause” in his illness, according to the verdict, and Monsanto was irresponsible in neglecting to include a cancer warning label on the herbicide.

April 2019: The Bayer CEO receives a vote of “no confidence” as the number of lawsuits rises.

Bayer shareholders voted against Bayer CEO Werner Baumann due to their dissatisfaction with the Monsanto purchase. Between the combination of Bayer and Monsanto in June 2018 and April 2019, Bayer’s shares fell by more than 30%. The drop is attributed to a rise in the number of Roundup cancer lawsuits (13,400). Baumann was a strong supporter of the $63 billion Monsanto merger, which was heavily reviewed due to antitrust concerns. Continued court defeats and shareholder dissatisfaction may put more pressure on Roundup to settle the remaining litigation.

Bayer is slammed with a $2 billion Roundup verdict in May 2019.

A California jury awarded Alva and Alberta Pilliod $2 billion for their non-Hodgkin lymphoma. This is Bayer’s greatest Roundup loss to date. This was the third jury to find Monsanto guilty of failing to warn customers about the cancer risks of Roundup. The high punitive damage judgement was predicated on the claim that Monsanto hid these risks for decades. Roundup has components that are substantially more harmful than glyphosate — and even more dangerous when coupled with glyphosate, according to the Pilliods’ lawyers.

Bayer Attempts to Discredit Journalists and Activists in June 2019

Bayer reported in June that it had begun contacting journalists, legislators, and other interested parties who had been placed on Monsanto’s “watch lists” for openly criticizing the company’s products. Monsanto later admitted to trying to discredit critics like Carey Gillam, who investigated Roundup’s cancer links. Monsanto is said to have devised a public relations plan to target Gillam and discredit her work. Musician Neil Young, who published The Monsanto Years in 2015, was also in the sights.

Hardeman Damages are Slashed by a Judge in July 2019

Edwin Hardeman’s damages judgment was lowered from $80 million to $25 million by a federal court. Based on the facts shown at trial, the court agreed that Monsanto deserved to be penalized, but concluded that the sum of punitive damages was excessive. When a jury believes a defendant’s behavior was egregious, they can award punitive damages to punish them. Dewayne Johnson’s and Alva and Alberta Pilliod’s punitive damages were also lowered. The lower damages judgment is being appealed by Hardeman.

According to Bloomberg, Bayer is offering to pay up to $8 billion to settle Roundup cancer claims in the United States. Kenneth Feinberg, a court-appointed settlement master, labeled the study “total fantasy.” Around 18,000 Roundup lawsuits were filed against Bayer at the time. Other settlement estimates vary from $10 billion to $20 billion.

Germany agrees to ban glyphosate by the end of 2023 in September 2019.

In September, Bayer’s home nation of Germany decided to prohibit glyphosate by the end of 2023 and restrict its usage until then. Germany became the second nation to restrict glyphosate, after Austria, which approved legislation prohibiting all usage of the herbicide. Glyphosate has been banned or restricted in dozens of countries throughout the world. Several villages and localities around the United States have taken similar moves.

Bayer Announces a Surge in Roundup Lawsuits in October 2019

The number of Roundup cases filed in the United States more than quadrupled from 18,400 to 42,700 between July and October. The number of possible Roundup cases is enormous. Glyphosate has been introduced to almost everyone in some form or another. Roundup-ready crops account for over 90% of soybeans, 70% of maize, and 70% of cotton cultivated in the United States. As a consequence, glyphosate has been discovered in a wide range of popular foods as well as in the urine of 93% of Americans.

“Mediation Is Moving Slowly But Continually” in November 2019.

Kenneth Feinberg, a mediator who has managed a number of high-profile litigation settlements, is directing the Roundup settlement discussions behind the scenes. “Mediation is proceeding slowly but gradually,” Feinberg told a German magazine in November. Bayer CEO Werner Baumann has said that a settlement that “achieves finality of the whole case” would be considered.

Former Monsanto CEO is compelled to testify in December 2019.

Hugh Grant, the former CEO of Monsanto from 2003 to 2018, will be called to testify in a Roundup cancer trial in St. Louis. Grant’s lawyer attempted to keep him from testifying. (At the three trials held in California, he was not compelled to do so.) Monsanto’s headquarters are in St. Louis, but the city is also recognized for being a plaintiff-friendly venue, with a history of significant corporate judgments. “She’s gone through hell,” said plaintiff Sharlean Gordon’s attorney. She’s been seriously hurt. The human toll is staggering. I believe Sharlean will put a human face on what Monsanto has done to humanity.”

Bayer and the numerous patients who blame glyphosate for their non-Hodgkin lymphoma face a flood of Roundup lawsuits in 2020.

In January, two cases in California state courts and two in St. Louis are slated to go to trial. Another study is slated for February, followed by two more in March and almost monthly trials from April until October 2021. Two January trials involving plaintiffs under the age of 15 were recently postponed by Bayer. If these cases do not settle and go to trial, it may indicate that reaching a settlement will take longer.

Contact us for a free case evaluation if you were diagnosed with non-Hodgkin lymphoma after using Roundup.

The “roundup settlement checks 2020” is a year in review of the Roundup Cancer Lawsuits. In 2019, there were over 1,000 new cases filed against Monsanto and Bayer. The lawsuits are still ongoing and it is unknown when they will be settled or if they will be successful.

What is the average settlement for the Roundup lawsuit?

A: The average settlement for the Roundup lawsuit is $2.5 million, which took ten years to reach that point.

What is the current status of the Roundup lawsuit?

A: The current status of the Roundup lawsuit is that it has been settled and Monsanto agreed to pay $289 million, but this did not include punitive damages.

When can I expect my Roundup settlement check?

A: Depends what type of Roundup settlement check you are asking about.