The legal battle over the drug Risperdal is continuing. The manufacturer of this medication, Janssen Pharmaceuticals, has denied all allegations that it gave boys breast development and feminization side effects without their knowledge. However, hundreds of men are suing for damages related to breasts on top of other symptoms like weight gain and decreased sex drive if they were given these medications as children during 1980-1995.

The “risperdal breast growth pictures” is a story that has been circulating the internet, where hundreds of boys say they were given breasts by Risperdal. 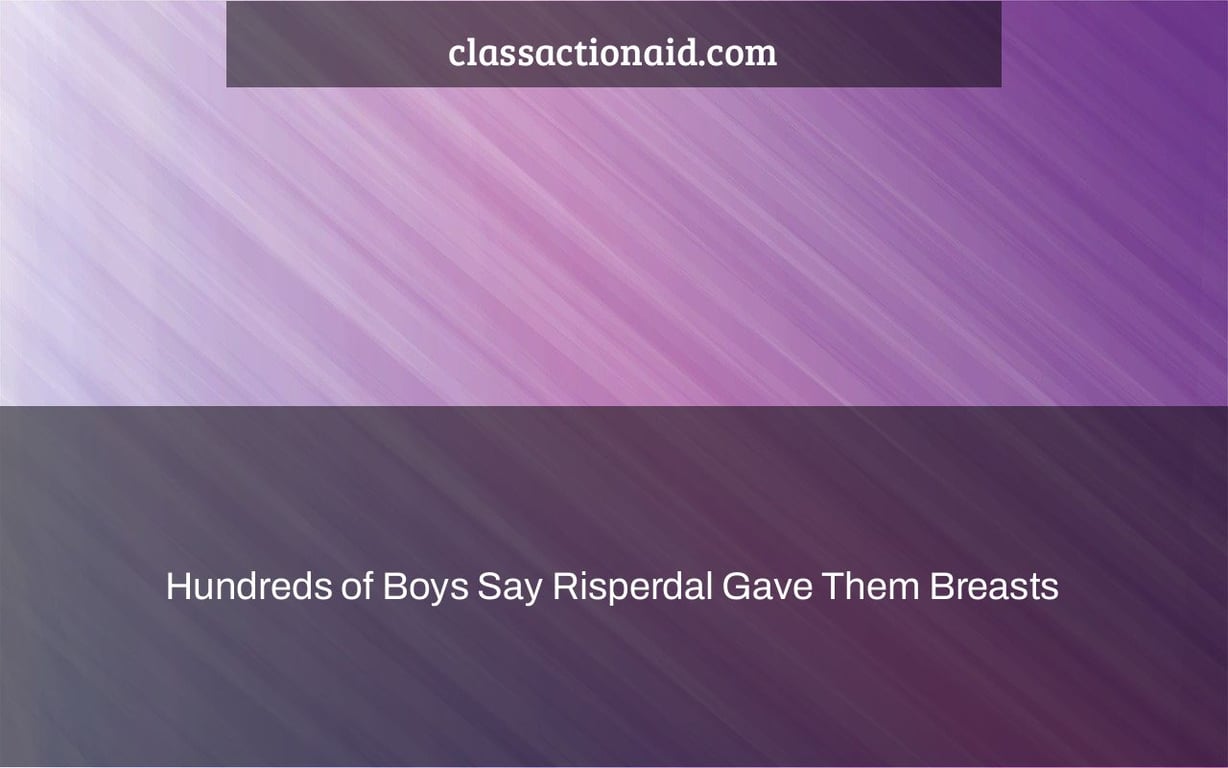 For five years, Shaquil Byrd had to protect himself from bullies. Now he’s going after the source of his torment: Johnson & Johnson.

Mr. Byrd (now 24 and residing in Albany, New York) was administered Risperdal when he was nine years old to manage his mental health difficulties, which included depression, ADHD, and bipolar disorder. Mr. Byrd developed breasts shortly after starting the medicine, a condition known as gynecomastia.

Though J&J knew Risperdal could have this side effect, they did not add a warning to its label until 2006. By that point, the drug had been prescribed to hundreds if not thousands of young men.

Mr. Byrd’s breasts would sometimes lactate. Mr. Byrd was teased and bullied by classmates for five years, from 2002 to 2007, when he stopped using Risperdal. His self-esteem deteriorated, and his self-image became distorted.

Mr. Byrd’s mother, Eugenia Jordan, told WNYT, “He did a lot of sobbing.” “When he was with other people, he felt quite uneasy.”

In 2014, Mr. Byrd had his breasts surgically removed: a big step forward in his recovery from this trauma. He also filed a lawsuit against Johnson & Johnson—one of roughly 1,600 the company has faced in the wake of Risperdal’s traumatic side effects.

Incredibly—despite their own research and others’, the evidence in this case, and the scores of similar cases—J&J denies all wrongdoing, stating

We feel there is no indication that RISPERDAL® was harmful to this patient, who ceased using it eight years before being diagnosed with gynecomastia. In this case, we shall continue to protect ourselves.

Johnson & Johnson claims Mr. Byrd received a gynecomastia diagnosis eight years after he stopped taking Risperdal—which would be 2015, a year after he’d had his breasts surgically removed.

In 2000, Johnson & Johnson learned that 5.5% of boys taking Risperdal long-term eventually developed breasts. But the Risperdal label said that this occurred in 0.1% of boys. By the year 2000, children and teenagers made up more than one-fifth of Risperdal users.

Risperdal wasn’t FDA-approved for children in 2002, when a doctor prescribed it to Shaquil Byrd. (Off-label prescriptions are legal; off-label promotions by drug makers are not.) But that didn’t stop J&J from marketing it to kids, a significant chunk of whom would contract gynecomastia. This callous disregard would wind up costing the company billions.

By the year 2000, children and teenagers made up more than one-fifth of Risperdal users.

From 1999 to 2005, the FDA repeatedly warned J&J about promoting Risperdal for use by young people. During this time, the Justice Department says that Janssen promoted Risperdal for use in children and individuals with mental disabilities, despite the company knowing that Risperdal posed “certain health risks to children, including the risk of elevated levels of prolactin, a hormone that can stimulate breast development.”

In 2013, J&J settled 77 lawsuits filed by men who had taken Risperdal and experienced unwanted (and undisclosed) side effects. Later that year, Johnson & Johnson settled a Justice Department investigation into its promotion and marketing of Risperdal by paying a $2.2 billion fine—one of the largest in American pharmaceutical history.

Recently, the filmmakers behind the hit Netflix documentary Making a Murderer announced their next subject: Johnson & Johnson’s manipulative and heartless promotion of Risperdal, as covered in great (and painful) detail by Steven Brill at The Huffington Post.

“America’s Most Admired Lawbreaker” is the title of the article.

A man from Alabama has been awarded $2.5 million.

Mr. Pledger, an autistic young man from Alabama, developed breasts after taking Risperdal as a toddler in 2002, much like Shaquil Byrd. He, like Mr. Byrd, was teased by his classmates because of his large breasts, which ultimately developed to a size 46DD.

Mr. Pledger’s breasts increased in size to a size 46DD.

And like Mr. Byrd, Mr. Pledger filed a lawsuit against J&J to hold them accountable for their egregious disregard and concealment of Risperdal’s potential side effects.

In February 2015, a Philadelphia jury ruled in Mr. Pledger’s favor, awarding him $2.5 million in damages.

During the trial, former FDA chief David Kessler testified that J&J knew as early as 2001 that Risperdal could cause gynecomastia in as many as 5.5% of Risperdal users, but did not add a warning to the drug’s label until five years later, in 2006.

Mr. Pledger may have won the case, but he still despises his physical appearance. When he looks in the mirror, he sees his mother instead of his father, who he idolizes. Mr. Pledger, like Mr. Byrd, will very certainly need a mastectomy in the near future.

No amount of money will be able to restore his physique or erase the years of hatred and self-loathing he has endured.

Thousands of Risperdal cases are still being investigated.

Austin Pledger’s case was one of thousands that now await trial in Philadelphia. The sheer volume of plaintiffs serves as a powerful indictment of Johnson & Johnson—as does J&J’s internal handling of the Risperdal issue.

The man responsible for Risperdal’s unlawful marketing was Alex Gorsky. Instead of punishing or firing Mr. Gorsky for the damage he inflicted on hundreds of young boys (and the elderly, who are vulnerable to strokes if they take Risperdal), Johnson & Johnson promoted him to CEO.

Mr. Gorsky is still the CEO today. Mr. Gorsky earns more than $25 million per year, but victims like Shaquil Byrd and Austin Pledger must pay attorneys, travel to court, and battle for recompense for medical expenditures and psychological damage.

Our law firm, Morgan & Morgan, doesn’t think that’s right. We are one of the largest personal injury firms in the country, and we aim to hold Johnson & Johnson accountable for their actions.

Please contact us if you or a loved one has had negative effects after using Risperdal. Don’t put it off any longer; some situations are time-sensitive, and you might be due money.

A: Risperdal is an antipsychotic medication. It can cause a variety of side effects that may include weight gain, gynecomastia (breasts), and other changes in male body shape or size.

How common is gynecomastia with Risperdal?

A: There are no reported side effects, but there is a risk of gynecomastia occurring.