Furniture Tip-Over Accidents In The United States
This article will explore the most common types of furniture tip-over accidents that occur in the US. It also includes tips on how to prevent these accidents, and some information about child safety.

Furniture Tip-Over Accidents are a common occurrence. The “furniture tip-over prevention” is an article that provides information on tips to prevent furniture from tipping over and causing injuries. 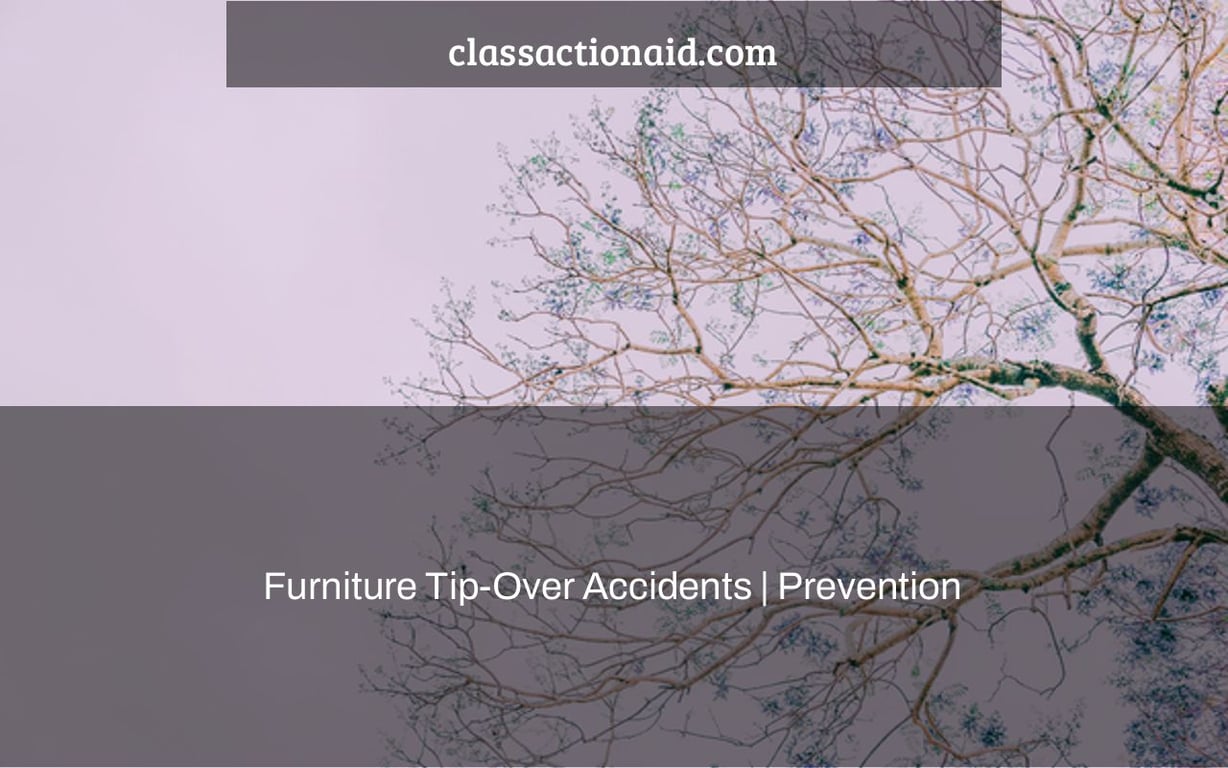 Furniture tip-over incidents are shockingly common: around 40,000 individuals visit emergency departments each year as a result of these mishaps. Worse, 25,000 of those who have been hurt are youngsters.

In furniture incidents, hundreds of children have died and others have been hurt.

Tip-overs killed 49 children in America in 2011, according to the Consumer Product Safety Commission (CPSC). That’s about one each week, and 21 more than the previous year.

After at least seven children died in IKEA tip-over incidents, the company recalled 29 million dressers and chests in June 2016. According to the New York Times:

When a drawer is expanded and 50 pounds of weight is applied, most American furniture makers comply to voluntary safety regulations, which guarantee that the item does not tip over. The recall, which began on Tuesday, covers any Ikea furniture that fails the test, according to the Consumer Product Safety Commission [CPSC].

It’s unclear why IKEA didn’t follow these safety guidelines from the beginning, or why it took the deaths of seven kids to get them to act. Hundreds of youngsters have perished and countless more have been wounded as a result of furniture mishaps.

Many relatives of tip-over victims sue the manufacturers for wrongful death, negligence, design or manufacturing flaws, or a combination of the above. Some families, such as Curren Collas’, Camden Ellis’, and Ted McGee’s, have reached settlements for millions of dollars.

IKEA Must Be Held Accountable

When youngsters climb or drag themselves onto furniture or appliances, the most frequent kind of tip-over catastrophe occurs. Falling TVs account for 70% of accidents, while furniture such as chests and dressers account for 26%. Many kids are enticed to climb on drawers or shelves, which may be dangerous.

A product may be faulty or badly designed, or it might be improperly made by the customer (and sometimes both).

The recalled furniture was never designed to be freestanding, according to Lars Petersson, president and CEO of IKEA USA, who told The New York Times that it was meant to be secured to the wall using straps or brackets. “If you put it together right, it’s really a pretty safe product,” Mr. Petersson said.

But how many customers are aware of the need of anchoring their furniture to the wall?

“Never Heard of Tip-Overs Until Their Child Was Killed”

IKEA handed out free wall anchor kits to consumers in the summer of 2015 to improve the safety of its goods. Unfortunately, the majority of clients were ignorant of the dangers presented by freestanding furniture, therefore the offer went unreported.

“But other [victims’ parents] claim their regrets aren’t from having disregarded a warning,” author Olivia Hall writes in The Philadelphia Inquirer’s shocking and detailed investigation of the tip-over epidemic. They had never heard of tip-overs until their kid was murdered in one.”

“Why didn’t these things come with brackets in the first place?” is another query raised by IKEA’s anchor offer.

As tragic incidents like Katie Lambert, Curren Collas, Camden Ellis, and Ted McGee have proven, freestanding tall bookcases may be extremely lethal when ascended by a youngster.

Katie Lambert is a writer who lives in New York (2005)

Katie Lambert, two years old, was killed instantaneously when a 200-pound wardrobe collapsed on her in Huntingdon Valley, Pennsylvania in January 2005. In 2007, the Lamberts filed a wrongful death complaint against IKEA. They reached a $2.3 million settlement in 2008.

Curren Collas, two, of West Chester, PA, died in February 2014 when a 136-pound MALM dresser turned over over him as he was climbing on it. Curren’s mother eventually sued IKEA for wrongful death, saying that the dresser was missing the supplies and instructions needed to fasten it to the wall.

Camden Ellis, a two-year-old from Snohomish, WA, died in June 2014 after being trapped by a three-drawer Malm dresser. His family has taken IKEA to court.

Ted McGee of Apple Valley, Minnesota, was killed in February 2016 when a tall, six-drawer IKEA dresser toppled on him. Ted’s family sued IKEA for wrongful death.

The product was not fastened to the wall, which is required by the product’s installation instructions, according to Ikea. We want to highlight that the best approach to keep chests of drawers from tipping over is to use the accompanying restraints and hardware to secure them to the wall according to the assembly instructions.

IKEA announced a $50 million settlement with the families of Curren Collas, Camden Ellis, and Ted McGee on December 22, 2016. The amount of $50 million will be split among the three families. In addition, IKEA will make a $150,000 donation to children’s hospitals.

IKEA has issued a recall for 29 million dressers.

After the deaths of seven kids in June 2016, IKEA ultimately announced a wide recall of 29 million chests and dressers that failed to fulfill the Consumer Product Safety Commission’s voluntary safety guidelines (CPSC).

“If you have or suspect you have one of these goods, act quickly,” said CPSC Chairman Elliot F. Kaye. It’s just too risky to leave the recalled furniture alone in your house, particularly if you have small children.”

Make Sure Your Family Is Safe From Falling Furniture

As previously said, the most essential thing you can do to avoid tip-overs is to tie furniture to the wall. It’s preferable to get rid of furniture that you can’t or won’t anchor. (If your item is part of the IKEA recall, they will come to your house and take it up, and you will get a full refund.)

Large or hefty television sets should also be avoided. Because televisions are involved in the majority of tip-over occurrences, the CPSC recommends putting them on low or solid bases and as far back as possible on those bases.

The following are the CPSC’s recommendations for avoiding tip-over injuries:

“Existing furniture may be fastened with cheap anti-tip brackets,” the CPSC notes. Anti-tip devices are offered with new furniture, such as dressers. Install them as soon as possible.”

Get to Know Your Legal Rights

If you or a loved one was hurt or killed as a result of furniture tipping, you may be able to file a lawsuit against the manufacturer.

Our company is one of the country’s biggest consumer protection companies. We are one of the few firms with the means to take on IKEA and other corporations of its magnitude, with over 300 lawyers and a support team of over 1,500 employees. We’ve earned more than $2 billion for our clients thus far.

The “furniture tip-over deaths” is a topic that many people are afraid of. The article talks about the prevention and child safety information for this type of accident.

How often is a child sent to the emergency room due to tipped furniture or a falling TV?

A: Every year, about 2.5 million children are sent to the emergency room due to tipped furniture or a falling TV.

Why would a dresser tip over?

How many kids are killed by falling furniture?

A: 32,000 children are killed by falling furniture in the United States every year.