The new guidelines, which are part of the AHA/ACC guideline update in January 2018, will require less monitoring and more treatment. For people taking medications to lower their blood pressure – including those who were prescribed them before January 1st- this could be a big change for your health care provider. Who benefits from these changes? 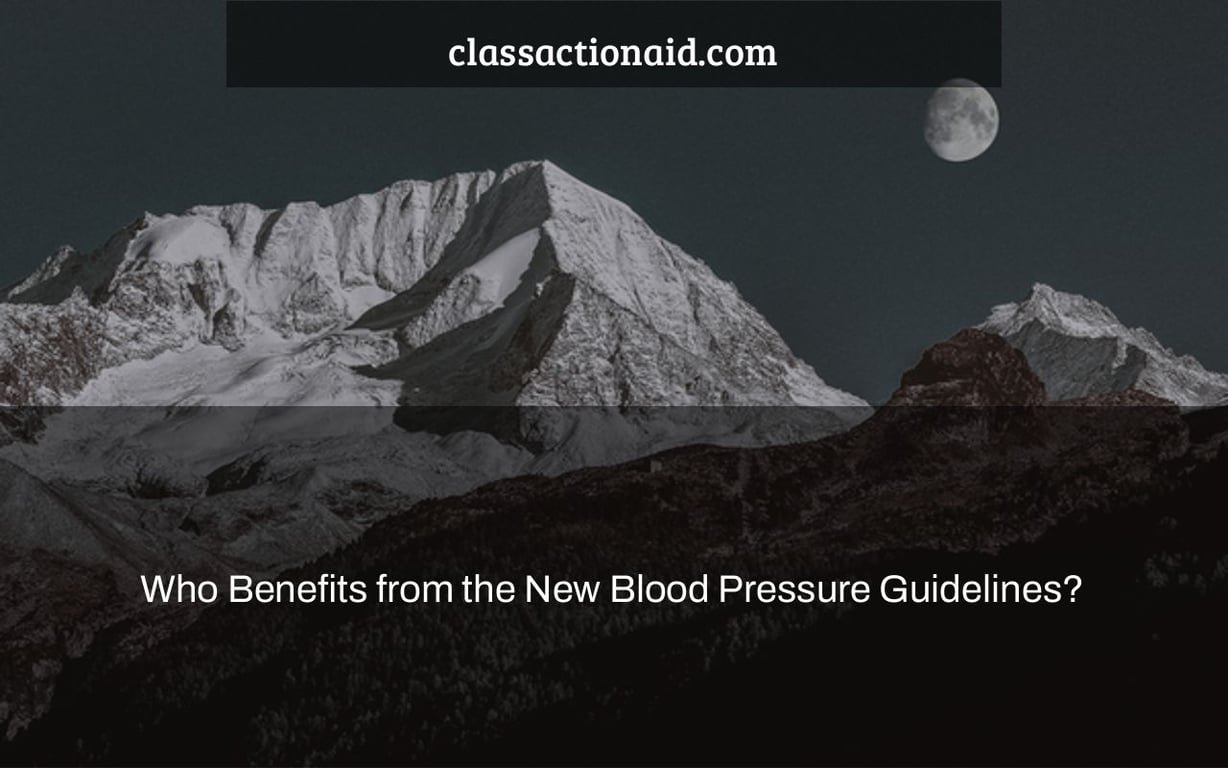 Treatment of prehypertension with medication is frequently unsuccessful and unneeded, raising concerns about the AHA and ACC’s motivations.

The AHA and ACC changed the recommendations in the hopes that by providing greater early notice, more Americans would be able to take preventive actions to control their blood pressure before it leads to a life-threatening event like a stroke.

The American College of Cardiology (ACC) issued a statement saying, “High blood pressure should be managed sooner with lifestyle modifications and in certain individuals with medication.”

However, studies demonstrate that using medicine to treat prehypertension (now Stage 1) is frequently ineffective and unneeded, raising doubts about the AHA and ACC’s motivations for changing blood pressure recommendations.

The number of patients who will be referred for treatment will rise by 7.5 million.

The number of Americans with moderate hypertension would rise by 26.8% under the new criteria, implying that half of all Americans will now be diagnosed with high blood pressure.

Were the previous blood pressure standards too high, putting certain Americans at risk of heart disease or stroke? Certainly not.

A 2014 paper in the journal BMJ suggested that mild hypertension was overtreated, even when 140 was deemed “light” hypertension (today it’s stage 2).

It’s also costing us money. Mild hypertension costs the United States $32 billion a year. That number is expected to rise: 7.5 million more individuals will be recommended for treatment, including prescription medicines, and 13.9 million more will be advised for more intense treatment.

Only those with Stage 1 hypertension who have previously had a heart attack or stroke, or who are at high risk of having a cardiovascular event due to their age, existing chronic kidney disease or diabetes, or their risk of developing atherosclerotic disease, should be prescribed medication, according to the AHA.

However, there is still ample room for medicine to be administered under this suggestion, and the AHA did nothing to discourage doctors from overprescribing medication to individuals with blood pressure over 140. In fact, by referring to it as Stage 2 hypertension instead of Stage 1, they made medicine seem even more important, not less.

“When people have commercial ties, they are more prone to developing subtle, but sometimes powerful, pro-industry mindsets.”

Why did the AHA and ACC alter these new blood pressure figures if they may do more damage than good? It’s possible that financial incentives are at fault.

Six members of the 15-member group responsible for crafting the new rules, including the panel’s co-chair, had financial links to the pharmaceutical business. The panelists have links to pharmaceutical corporations such as Merck, Pfizer, and AstraZeneca, which all make hypertension medications. These links might range from paid consultancy jobs to all-inclusive conference packages at five-star hotels.

The panelists aren’t the only ones with links to Big Pharma; the association’s leadership is as well.

In the 2015-16 fiscal year, the AHA earned $30 million from pharmaceutical and medical device companies.

Lisa Cosgrove, Fellow at the Edmond J. Safra Center for Ethics at Harvard University, explained the dangers of pharmaceutical ties on committee guidelines in a Forbes article: “When people have commercial ties, they are more prone to developing subtle, but sometimes powerful, pro-industry mindsets.”

When you consider former AHA President Dr. Robert Eckel’s activities in 2014, when he collected approximately $33,000 in industry contributions, it sounds reasonable. He testified before the FDA in support of Praluent, a cholesterol-lowering medicine, and co-authored the American Heart Association’s recommendations on “Treatment of Blood Cholesterol,” in which he outlined how more Americans may benefit from statins.

“An estimated 33 million Americans without cardiovascular disease who have a 7.5 percent or greater risk of a heart attack or stroke during the next 10 years might be administered statins,” Dr. Eckels stated.

The Institute of Medicine is dedicated to resolving conflicts of interest.

The Institute of Medicine (a branch of the National Academies of Science, Engineering, and Medicine) is attempting to address this issue. They released new committee criteria in 2011, proposing that the majority of committee members and the leadership be free of conflicts of interest.

Having guidelines is one thing; persuading researchers to follow them is another.

The University of Maryland School of Medicine looked through 130 clinical practice guidelines to determine how many already followed the IoM’s suggestions. According to the findings, more than two-thirds of committee heads and 91% of co-chairs indicated a conflict of interest as of June 2011. At the time, just around half of the committees disclosed their links to the sector.

Are you experiencing severe side effects as a result of your medication?

Regardless matter why the blood pressure standards were changed, millions more Americans will be offered medicine that may do more damage than benefit. Lisinopril (or Zestril and Prinivil) has been linked to an increased risk of liver damage and failure, while Benicar and its sister medicines Azor and Tribenzor have been linked to intestinal disorders such sprue-like enteropathy.

If you or a loved one was injured by a medication’s severe adverse effects, you may be able to file a lawsuit against the manufacturer. For a free, no-obligation legal consultation, contact us now.

The “what was normal blood pressure in 1970” is a question that has been asked repeatedly. The new guidelines were released on June 22, 2018 by the American Heart Association.

What is the new blood pressure recommendation?

A: According to the American Heart Association, their new recommendations for healthy blood pressure levels are 140/90 mm Hg or lower.

What is the new normal blood pressure 2021?

A: They are very high. It is recommended that you see your doctor every month to check your blood pressure and take any necessary action if needed.