The risks of Belviq came to light in September, 2018 when the FDA released their findings. The drugmaker was aware of the risk and went on to press release a statement saying they would not change their marketing plans. Was there more negligence than just releasing a public warning?

The “lorcaserin and cancer” is a question that has been asked. The drugmaker, Arena Pharmaceuticals, was aware of the risks. 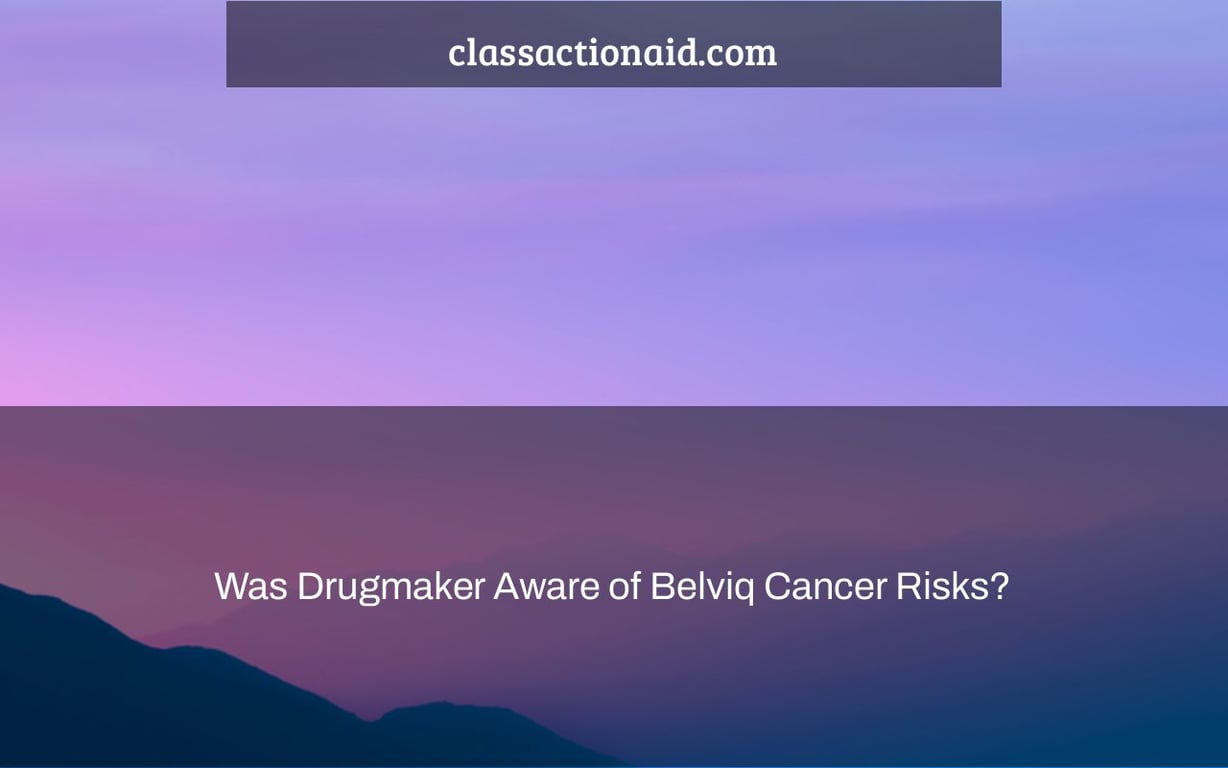 Long before the weight-loss medicine Belviq (lorcaserin) was taken from the market due to cancer concerns, preapproval testing found indications of the drug’s carcinogenicity. These results, which are now being scrutinized again, raise doubts about whether Belviq should have been authorized in the first place.

Did you get cancer after using Belviq? In a free case review, you may learn about your legal choices.

Belviq is being recalled as a result of a post-market investigation.

In January 2020, the FDA reported that it was examining Belviq clinical study results. That information came from a postmarketing study of Belviq’s cardiovascular safety, which the FDA required when the medicine was authorized in 2012.

While the research found no increased risk of cardiovascular disease in Belviq users, the FDA’s first review found a possible cancer risk. The FDA concluded that, as compared to a placebo group, people using lorcaserin had a greater risk of developing cancer, including pancreatic, colorectal, and lung malignancies. Following this investigation, the FDA requested that Belviq and Belviq XR be recalled from the market in the United States.

Lorcaserin was first denied approval due to cancer concerns raised in a rat study.

According to FDA papers, the government rejected Arena Pharmaceuticals’ new drug application (NDA) for lorcaserin in its initial examination because of research showing tumors in rats.

Arena shareholders filed a securities class action lawsuit in 2013 to address these concerns. Arena had not been forthcoming about the safety of lorcaserin, according to the lawsuit, and this material misrepresentation caused Arena’s stock to plummet after the rat study results were released. The FDA is concerned about these findings and has “reduced confidence in the data,” according to the report.

According to the lawsuit, “by February 2007, the results of the ongoing Rat Study indicated that lorcaserin caused mammary, brain, skin, and nerve-sheath tumors, including lethal, malignant mammary and brain tumors.” “The FDA was particularly worried about the outcomes of the Rat Study and instructed [Arena] to produce bi-monthly reports on the Study’s findings.”

New rat research data revealed that the frequency of dangerous tumors reduced but the number of benign tumors grew at a subsequent meeting between Arena officials and the FDA. The complaint claims that “no proof was given on behalf of Arena to justify this change.”

The FDA received the final rat trial results in December 2009. Because of the issues identified by the rat research, nine of the 14 members of the FDA Advisory Committee decided not to recommend approval of lorcaserin in September 2010. “[Arena] could not demonstrate to the FDA that the Rat Study was irrelevant to humans,” according to the lawsuit.

Belviq is approved by the FDA, reversing its previous position.

The FDA requested more information from Arena about the rat study’s relevance to humans after it decided not to approve lorcaserin. Long-term studies were recommended by the FDA to show that the drug’s carcinogenicity risk was rat-specific. Belviq was approved by the FDA in June 2012 after the FDA determined that the increased risk of tumors in rats did not apply to humans.

According to a 2012 FDA review document, the committee unanimously agreed that the drug is safe when used at the concentrations intended for patients. However, there was some worry regarding a “as-of-yet unidentified susceptible patient group who are more likely to develop a tumor as a result of lorcaserin,” according to the report. The rat cancer studies are included on the FDA-approved Belviq medicine label, but the results are based on dosages far higher than those used in people, according to the safety information.

“The applicability of these results in animals to people is uncertain,” Eisai Inc., which bought Belviq from Arena Pharmaceuticals in 2016, told Everyday Health. Eisai is removing Belviq and Belviq XR from U.S. shelves at the request of the FDA.

Are you thinking about filing a Belviq lawsuit? We can assist you.

According to the FDA’s most recent review of Belviq, the drug’s possible cancer risk exceeds its benefits. Unfortunately, for some patients, this warning may come too late.

You may be able to launch a Belviq claim if you took lorcaserin and were later diagnosed with cancer. Medical expenditures, pain and suffering, and lost pay may all be recovered in a successful case against the drug’s maker. Because of the tight deadlines for bringing lawsuits, you should consult with an attorney as soon as possible to identify the best course of action. For a free legal consultation, call 855-300-4459 or send us an email.

In January, the FDA approved the drug lorcaserin for weight loss. However, some experts are questioning whether or not the company knew about the cancer risks of this medication. Reference: lorcaserin moa.

What kind of cancer does Belviq cause?

A: Belviq is a weight loss drug that causes cancer. Its called adipogenic, meaning it promotes the formation of fat cells in the body.

Why was Belviq discontinued?

A: Belviq was discontinued because it became legally difficult to keep the medication on market in France, where the drug is manufactured.

When was Belviq removed from the market?