Uber is currently suing its drivers in an attempt to prevent them from forming a union. The company has filed lawsuits and public statements, stating that the move will be “bad for business” if all of their drivers are represented by one entity.

Uber has been using scare tactics to turn drivers from unions. They have been telling drivers that they will be deactivated if they are a part of a union. This is not true and Uber is just trying to get more money out of their drivers. Read more in detail here: uber news. 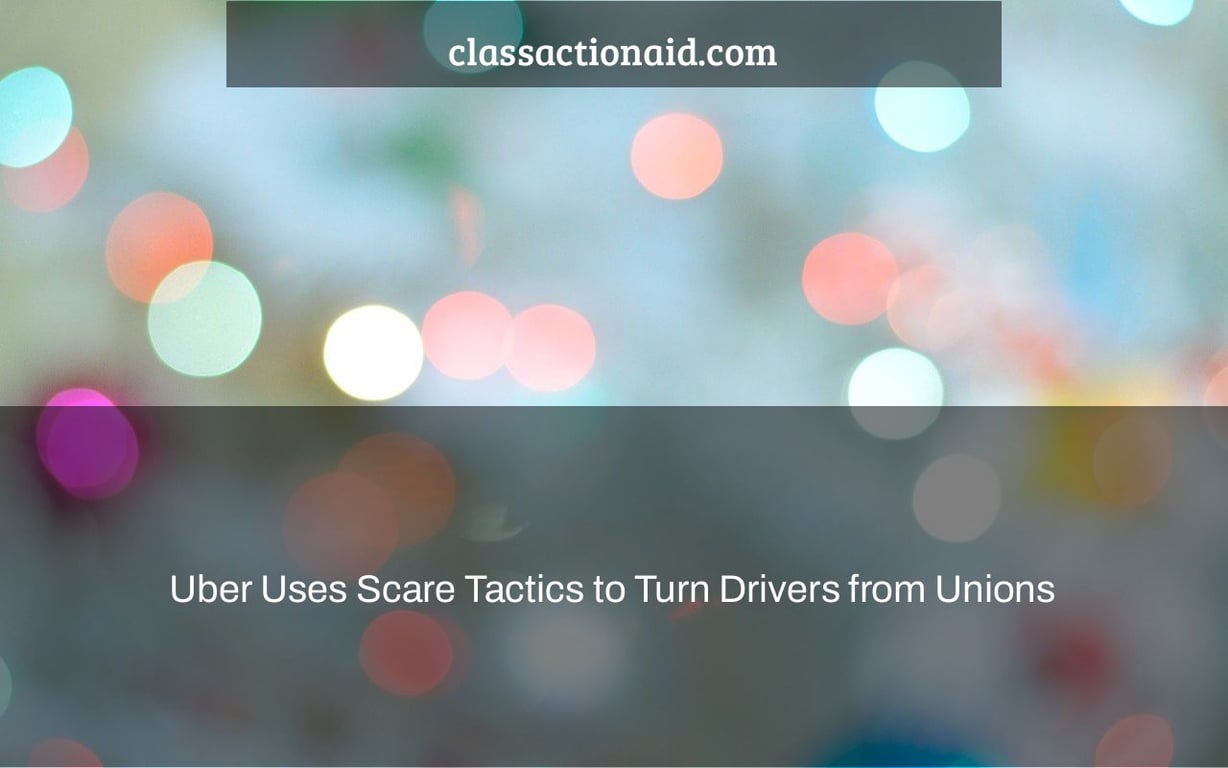 Some Uber drivers are pursuing union participation because they lack the privileges and voice that come with being classified as an employee.

Uber like having its cake and eating it as well. Especially when it comes to driver classification.

Do Uber drivers work for the company? No, according to Uber, which they believe is excellent since it enables drivers to work on their own time. In addition, not having to pay minimum wage, sick days, or benefits like unemployment or health insurance saves Uber a lot of money.

However, unlike contractors, Uber drivers do not have control over their fares and are always at danger of being removed from the app.

Uber drivers are trapped in a no-land man’s without a voice, having neither the rights of employees nor the ownership and freedom of freelancers, prompting some to seek representation via unions or driving guilds.

Seattle’s Collective Bargaining Law is temporarily halted by a judge.

The battlefield for Uber’s labor dispute is presently Seattle. At the end of 2015, the city enacted the For-Hire Driver Collective Bargaining Law, the first of its type in the country, allowing Uber and Lyft drivers to form unions.

Although the legislation is only in effect in Seattle, it has the potential to transform how Uber and Lyft drivers are represented and what rights they have throughout the nation.

The US Chamber of Commerce (which represents Uber) replied by filing a lawsuit against the city, arguing that since Uber drivers are independent contractors, they are unable to form unions. If they had representation to lobby for minimum wage or higher fares, they said, it would be a price-fixing problem.

A court decided in their favor last week, temporarily halting the law’s implementation.

“While a drivers guild may be a solid start, earlier union structures are unlikely to apply in the face of federal legislation governing independent contractors.”

However, a related federal complaint filed in New York claims that Uber is already guilty of price-fixing since it sets the fees for its drivers, who are all independent contractors.

We spoke with Ehsan Zaffar, an American University Washington College of Law law professor, about his opinions on the subject. He argues that an entirely new legislative system is needed to enable “drivers to pool resources and negotiate collectively, while yet enabling Uber and its drivers to profit equitably from independent contractor regulations.”

“A drivers guild may be a good start,” Zaffar said, “but earlier union structures are unlikely to apply in the face of federal regulations protecting independent contractors.”

Uber cautions that a union might “basically hound drivers” to get them to join and pay dues, describing them as “very terrifying” at one point.

The corporation used television advertising and phone calls to persuade drivers that forming a union would harm them. Even complete anti-union episodes can be found on Uber’s Seattle podcast.

The podcast includes Uber driver remarks that reaffirm the company’s message. “It’s really amazing that Uber is sticking up for its drivers,” Eric, an Uber driver, said in one episode.

However, the veracity of Eric the Uber driver’s statement is unknown. He states in one episode that he is a member of the group Drive Forward, which advocates for Uber drivers’ flexibility. However, if you read the tiny print on their website, you’ll see that Uber formed the organization.

The Teamsters Union has rejected Uber’s main claim that union representation would limit drivers’ freedom. Drivers would vote on proposed contracts and any modifications in conditions, according to the union.

Uber drivers don’t have a say in the matter.

“If any group of employees deserves the right to band together to better their working conditions and hold their employer accountable, it’s Uber drivers.”

It’s unclear if unionization is the right course of action for Uber drivers, but it’s evident that something has to happen to guarantee that drivers are treated properly.

Uber has taken advantage of the fact that its drivers are independent contractors to keep them silent.

“Uber drivers are governed by incomprehensible and unjust algorithms, and they have no method of raising any problems with the firm,” said Tom Slee, author of What’s Yours is Mine: Against the Sharing Economy. “If any group of employees deserves the right to band together to better their working conditions and hold their employer accountable, it’s Uber drivers.”

For Uber drivers, the “sharing economy” is one-sided.

“The firm is looking for a one-of-a-kind blend of control and responsibility.”

Many Uber drivers are now struggling to make ends meet, earning less than minimum wage and having no safety net in place during times of low traffic.

Drivers are required to cooperate when Uber chooses to provide cheaper trips, even if it entails a reduction in their revenue. According to Uber, promotions result in more customers for drivers, but they also result in longer hours.

Some drivers have reported seeing cheaper charges on their applications than the fares paid to customers, leading them to suspect Uber is pocketing the difference.

According to a recent New York Times article, drivers are even subjected to psychological “gaming” tactics to encourage them to work longer hours. The software used to prompt drivers to pick up a new passenger before dropping off the one who was currently in their vehicle. Drivers who fail to take at least 90% of trips or who get low ratings—even if they don’t deserve them—are often deactivated.

“Uber uses algorithms to micromanage its drivers, from recording driving behaviors to terminating drivers with negative ratings. “The firm is looking for a one-of-a-kind blend of control and responsibility,” Slee said.

Drivers, as independent contractors, bear a significant portion of Uber’s business risk by not having a consistent income or schedule, yet also lack the genuine advantages of “flexibility” that the firm promotes.

With price-fixing litigation pending in Seattle and New York, as well as continuing employment misclassification class action lawsuits in California and Massachusetts, it’s now up to the courts to determine precisely what Uber is and how its drivers should be classified under federal labor law.