A class action lawsuit has been filed against Janssen Pharmaceuticals and its subsidiary, Johnson & Johnson. The suit alleges that the company illegally marketed Risperdal with misleading information about benefits of the drug’s potential weight loss properties.

There are now roughly 20,000 Risperdal lawsuits. The “risperdal lawsuit payout per person” is the amount that each plaintiff will receive from Bayer. 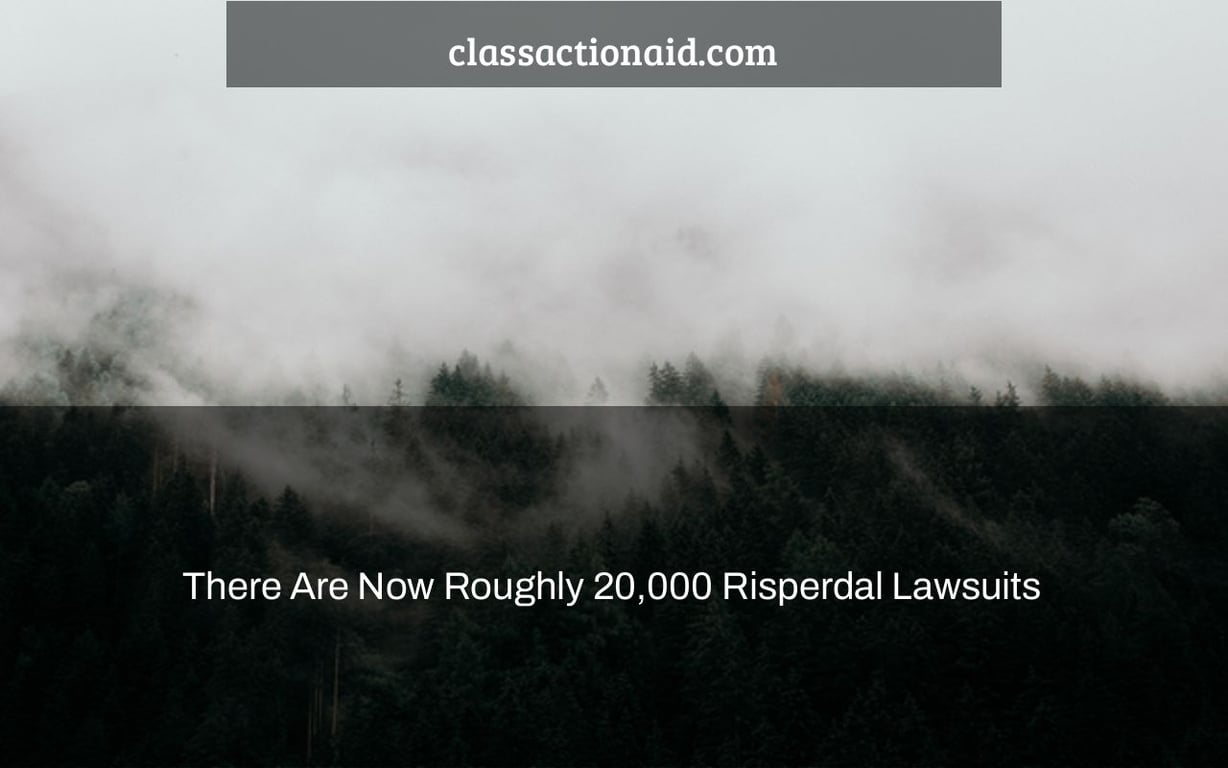 Given that gynecomastia was originally listed as a “rare” side effect on Risperdal labeling, the condition has resulted in a slew of lawsuits.

Johnson & Johnson (the parent company of medicine producer Janssen) disclosed in its annual report at the end of February that it was facing 18,500 Risperdal litigation in the United States and Canada.

In the first quarter of 2017, more than 3,000 Risperdal cases were filed in Philadelphia.

Since then, at least 500 Risperdal claims have been filed in Philadelphia alone, bringing the total number of Risperdal litigation to at least 19,000 and perhaps as many as 20,000 throughout the United States and Canada.

In the first quarter of 2017, plaintiffs in Philadelphia filed almost 3,000 such cases. There have been another 310 cases filed there in the last two months, bringing the total number of lawsuits to 5,815 as of this writing.

The numbers are astonishing, but the negative effects—and the jury awards—are even more so.

The risk of gynecomastia was 23 times higher than the label stated.

Risperdal is an antipsychotic drug used to treat attention deficit hyperactivity disorder (ADHD), bipolar disorder, and other mental illnesses. The medicine has been linked to the development of feminine breast tissue in young males, a condition known as gynecomastia.

Plaintiffs in the Risperdal case claim that Janssen was aware of the full scope of the gynecomastia risk but failed to sufficiently warn patients. Risperdal’s original labelling stated that gynecomastia occurred in less than one out of every 1,000 patients.

However, after 13 years on the market (1993-2006), Janssen revised the labeling to say that 2.3 percent of patients might have this serious adverse effect, which was more than 20 times the previous rate.

Risperdal’s original labelling stated that gynecomastia occurred in less than one out of every 1,000 patients.

According to complaints, these boys’ bodies changed as a consequence of Janssen’s failure to warn, leaving them bewildered and humiliated.

Many of these youngsters are now men who have had their breasts removed via surgery. To add salt to injury, several people gained a lot of weight (supposedly due to Risperdal) and had to lose it all before going under the knife.

They are, however, fighting back after years of being tormented for their appearance.

In addition to filing lawsuits to hold Janssen responsible, Risperdal users may help by increasing awareness about the gynecomastia side effect. This might increase the pressure on Janssen to rectify the problem. But, perhaps more crucially, it informs other victims that they are not alone in their pain.

“They wanted the rest of the world to know what had happened to them,” says the narrator.

With this in mind, a photographer named Richard Johnson just released the “Risperdal Boys” series of photographs. Six boys (now men) supposedly sprouted breasts after using Risperdal are featured in this project, each with three images. (There were supposed to be ten Risperdal Boys, but four of them eventually opted not to have their photographs taken.)

“It was because they wanted the world to know what happened to them,” Mr. Johnson says PetaPixel of the six who did participate. The majority of the young guys in the initiative were alone in their suffering; they had never met anybody else in their situation.”

Hundreds, if not thousands, more boys will realize they are not alone thanks to the Risperdal Boys’ courage.

Juries rule in favor of the plaintiffs, awarding them millions of dollars.

The pain of Risperdal claimants has not gone unnoticed by juries. J&J lost four separate Risperdal claims that went to trial last year. The first three instances totalled almost $5 million in awards, with Austin Pledger collecting $2.5 million on his own.

Even those figures pale in contrast to Andrew Yount, who was awarded $70 million in July 2016 by a Philadelphia jury. They found that J&J not only failed to warn Mr. Yount about the dangers of using Risperdal, but also deleted evidence in the case.

Johnson & Johnson had already sold $30 billion worth of Risperdal at that moment.

The US government wants to penalize Janssen for the way company handled Risperdal. The business was fined $2.2 billion by the Department of Justice in 2013 for promoting the medicine off-label.

Johnson & Johnson had already sold $30 billion worth of Risperdal at that moment. The medicine brought in $800 million in only one year.

If—or, more likely, when—J&J settles these hundreds of claims, keep that in mind.

Johnson & Johnson has been one of the most popular drug companies for decades. However, in 2015, there were roughly 20,000 lawsuits filed against the company for their use of Risperdal. Reference: johnson & johnson risperdal lawsuit update.

A: There is no general payout for Risperdal, the average lawsuit can be anything from $5K to a million. It all depends on how long it takes and what damages are awarded by the court of law.

What is the Risperdal lawsuit about?

A: Risperdal is a medication that some people take for anxiety and mood disorders. It was first introduced in the United States in 1986. In 2003, there were allegations submitted to the FDA by six former employees of Johnson & Johnsons subsidiary Janssen Pharmaceutica alleging misconduct at one of their labs where they worked on developing Risperdal medications

Why was Risperdal taken off the market?

A: After extensive investigations by the FDA and other regulatory agencies, Risperdal was taken off the market in 2006 due to safety concerns. It has since been found that unsafe interactions of raising blood pressure could lead to strokes or heart attacks.