The number of specialty drugs on the market has increased massively over recent decades, with brand name drug use rising from around 5% in 1975 to about 45% by 2008. There is a growing feeling that this increase may be skewing prescribing practices and fueling high costs for healthcare payers (policies like Medicare Part D). While there are no clear-cut solutions, one potential solution could stem from transparency between pharmaceutical companies and physicians who prescribe their medications.

The “do doctors get commission for prescribing drugs” is a study that has found a link between the amount of money spent on marketing by pharmaceutical companies and the number of prescriptions given to brand name drugs. 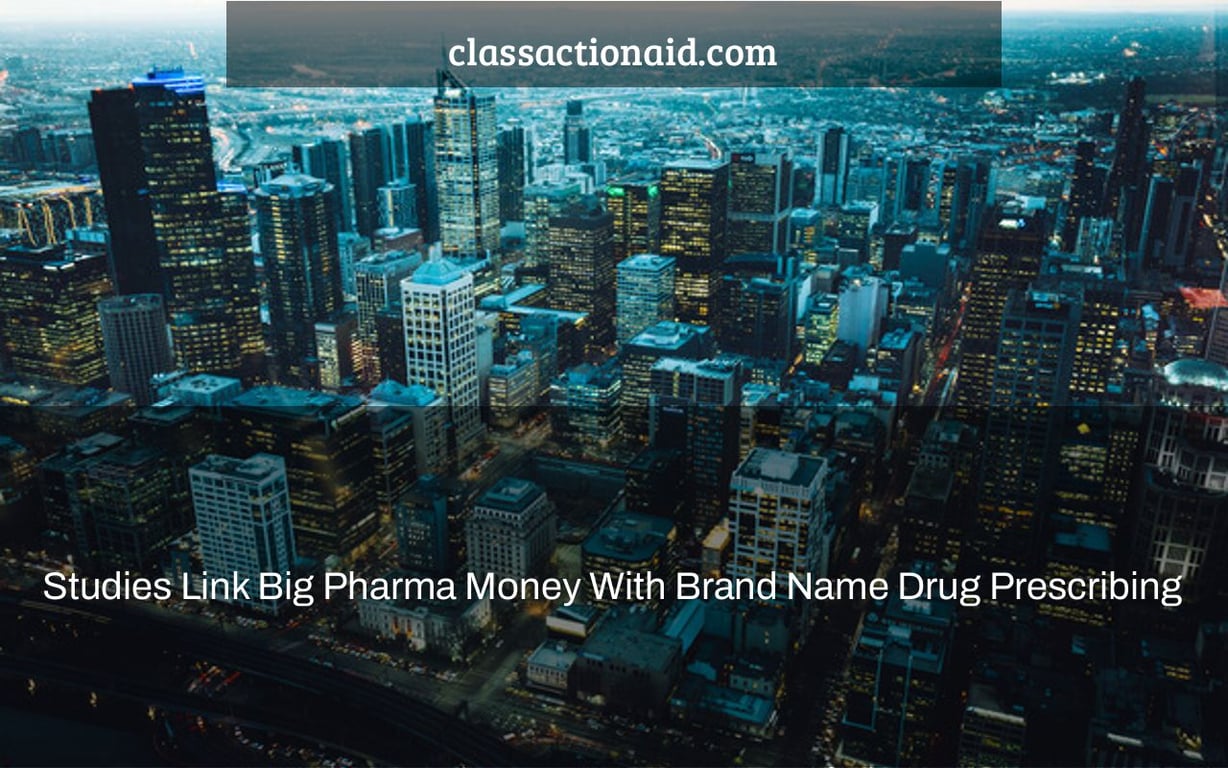 New data backs up what many people have believed for a long time: physicians who receive money from BigPharma prescribe brand-name pharmaceuticals at a greater rate than doctors who don’t.

“You want your physicians to remain impartial rather than acting in a way that benefits them financially, whether subconsciously or consciously.”

Improved transparency rules are putting light on physician-industry links and prompting a discussion over their legitimacy. Industry payments, although not unlawful, may contribute to a loss of patient confidence, higher prescription prices, and other bad health care outcomes. There’s also no proof that branded pharmaceuticals are more effective or provide higher patient satisfaction than generic alternatives.

While a Harvard research found a link between the amount of money received from the pharmaceutical business and the percentage of brand name prescription, a University of California investigation found that even a single meal may make a difference. Both studies back up ProPublica’s groundbreaking investigation.

According to a Harvard study, industry payments are linked to branded statin prescriptions.

They discovered that for every $1,000 in industry money received, physicians’ rates of prescribing brand name statins rose by 0.1 percent. Payments for educational training were linked to a 4.8 percent increase in prescription rates for brand-name drugs. The results, which were published in JAMA Internal Medicine, were described as “concerning” by the researchers.

Dr. Yeh told ProPublica, “You want your physicians to be impartial rather than doing something because there is a financial incentive, whether subconscious or conscious.”

Prescription pharmaceuticals are not only more costly than generics, but patients are also less likely to continue taking more expensive medications, which may result in worse patient health outcomes.

Because the data alone can’t account for factors like why a doctor chose a particular drug or whether pharmaceutical companies target doctors who already prescribe brand name drugs in higher numbers, Yeh and ProPublica caution that the study results don’t necessarily show a causal relationship between doctor payments and brand name prescribing.

Meals Lead to Increased Drug Prescriptions, According to a UCSF Study

The majority of payments to physicians in the sector are not made in cash. Instead, speaking fees, consultancy fees, travel and housing for company-sponsored training courses, show tickets, charity donations, and meals are common forms of recompense.

A single drug company lunch costing less than $20 might persuade a doctor to prescribe a marketed medicine over rivals, according to a recent research out of the University of California San Francisco.

The research, which was published in JAMA Internal Medicine, looked at data from the government Open Payments Program and Medicare Part D for three brand-name cardiovascular medicines (Crestor, Pristiq, and Benicar) and one brand-name antidepressant from 2013. (Pristiq). It was shown that physicians who were given a single industry-sponsored dinner advertising a certain medicine were substantially more inclined to prescribe it. Doctors were more inclined to prescribe the marketed medicine if they were fed more meals. Each of the medications had generic counterparts that were less expensive.

“I don’t believe any doctor believes, ‘I can be purchased for a hero or a piece of pizza,’” she says.

According to the authors of the report, industry-sponsored dinners account for almost 80% of all industry expenditures to doctors. The results are significant because they imply that influencing doctor prescription habits does not need large consulting fees or expensive entertaining. A single meal seems to be enough to generate a significant profit for pharmaceutical corporations.

“I don’t believe there is a doctor out there who thinks he or she can be purchased for a hero or a piece of pizza,” lead author R. Adams Dudley told the Wall Street Journal. However, according to Dr. Dudley, it is human nature for a doctor to listen to a sales person who offers a complimentary supper, and this might alter prescription habits.

Although the results are described as an association rather than a cause-and-effect link, JAMA Internal Medicine editor-at-large Robert Steinbrook said in an accompanying editorial that demonstrating a causative relationship may not be essential.

“Mr. Steinbrook noted, “There are inherent conflicts between the revenues of health-care businesses, physician independence and the integrity of our job, and the cost of medical treatment.” “Our patients and the health-care system would benefit if drug and device manufacturers stopped paying physicians for promotional speaking engagements, meals, and other activities that had no clear medical justification and instead invested more in independent, bona fide research on safety, effectiveness, and affordability.””

The findings of a ProPublica investigation have been confirmed.

Although it may seem evident that drug industry payments influence doctor prescription habits, evidence supporting the tendency has been missing until this year.

ProPublica released the findings of an extensive investigation in March 2016 that found that money from the pharmaceutical industry leads to physicians prescribing a larger proportion of brand-name medications.

Doctors who were paid by the pharmaceutical business were two to three times more likely to prescribe brand-name medications at high rates.

Physicians who got more industry money tended to prescribe brand name pharmaceuticals at a greater rate, according to the study, which looked at doctors across five main specialities who wrote at least 1,000 prescriptions in Medicare’s Part D drug program. Payments of $5,000 or more were linked to the greatest percentages of brand name prescription, but even a single dinner was linked to a greater rate of brand name prescribing. The investigation found that physicians who received industry incentives were two to three times more likely than other doctors in the same area to prescribe brand name pharmaceuticals at very high rates.

According to Harvard Medical School’s Dr. Aaron Kesselheim, ProPublica’s analysis “confirms the widespread opinion… that there is a link between payments and brand name prescription.” “This adds to the continuing debate about the appropriateness of these kinds of partnerships.” Hopefully, we’re beyond the phase when people say things like, “Oh, there’s no proof that these associations affect doctors’ prescription behaviors.”

Although the study does not establish that industry incentives induce physicians to prescribe particular treatments or items from a specific pharma firm, it does indicate that doctor payments enhance Big Pharma earnings in general.

“There is a very good reason why pharma corporations spend billions of dollars on sales and promotion: the plan works,” Morgan & Morgan attorney James Young stated.

Generics are not more effective than branded drugs.

According to study, name brand pharmaceuticals do not function any better than generics, despite their higher price tag. In terms of patient satisfaction, there isn’t much of a difference between name brand and generic medications.

Furthermore, generic medications may have a better-understood safety profile. Drugs must be on the market for many years before they can be offered as generics, and this real-world usage is particularly good in detecting possible adverse effects. Newer medication safety, on the other hand, is mostly based on smaller-scale clinical studies that may underrepresent bad patient outcomes in the real world.

“Ask your doctor why she picked that medicine over generics or rivals the next time she issues a prescription for a brand drug.”

Finally, studies demonstrate that even knowing that doctors are paid by the pharmaceutical business may erode a patient’s trust in their doctor. According to a 2012 research, more than half of patients asked indicated they would lose faith in their doctor if they learned he or she took gifts, went on industry-sponsored vacations, or got sports event tickets.

So, what can you do if you’re curious about your doctor’s business connections? Morgan & Morgan’s James Young urges people to question their doctor’s prescription patterns.

“Ask your doctor why she picked that medicine over generics or rivals the next time she issues a prescription for a brand drug,” James Young advises.

Patients may also see out how much pharma firms pay their doctor on the government’s Open Payments Database. Through their Dollars for Docs initiative, ProPublica provides a comparable service.

Do doctors get money from drug companies?

A: Yes, doctors get a large amount of money from drug companies. This is due to the fact that they are in charge of prescribing medications to patients and so need compensation for their services.

Do doctors get paid by drug companies for writing prescriptions?

A: If a doctor prescribes a drug, that doesnt mean they work for the company who makes it. The most common way to get paid is by selling products or services to companies that make drugs like insurance plans and consulting fees. Doctors are not strictly forbidden from writing prescriptions out of their own pocket, but these are seen as off-label uses on which no incentives might be offered so doctors wouldnt have much incentive in doing this unless the patient was very wealthy.

A: No, doctors do not receive kickbacks from drug companies. The only thing that they might be able to receive is a free product for their personal use in the form of samples or coupons.