It is one thing to think of lawsuits as something that’s out of your control, but it is another to try and prevent people from suing you. The U.S congress recently tried this in a recent vote on the issue after many states have seen increased number of personal injury cases filed against companies following a variety of scandals such as Volkswagen emissions scandal and dangerous products like hoverboards exploding

The “class action lawsuit against the government” is a topic that has been in the news recently. The question of whether or not Congress is trying to outlaw lawsuits is up for debate. 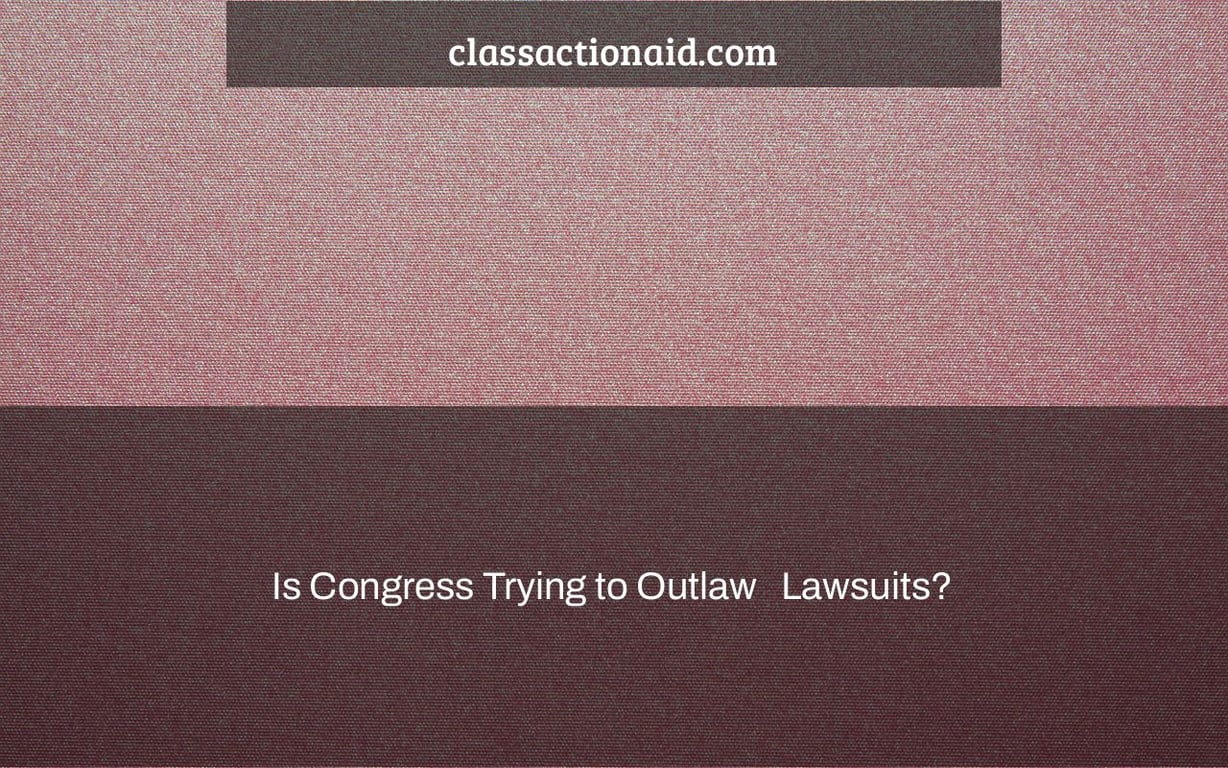 That’s precisely what they’re doing, according to more than 120 civil rights organizations.

Representative Bob Goodlatte (R-VA) introduced the Fairness in Class Action Litigation Act of 2017 on February 9, 2017, with the goal of “amending the procedures used in Federal court class actions and multidistrict litigation proceedings to ensure fairer, more efficient outcomes for claimants and defendants.”

The measure, H.R. 985, was cleared by the House Judiciary Committee on February 15 by a vote of 19 to 12. The measure passed the House of Representatives by a vote of 220-201 on March 9. The bill will now be considered by the Senate.

If approved, this law might result in the dismissal of cases that have been pending in an MDL for years.

The bill “seeks to essentially eliminate the rights of all Americans to seek redress in our court system through class actions or multidistrict litigation efforts, which are often the only viable options for injured patients and consumers to level the playing field and seek compensation when they have been harmed by large corporations,” according to attorney Laura Yaeger.

“This law wants retroactive applicability,” Ms. Yaeger continues, “which implies that if approved, it might delete cases that have already been filed and sitting in an MDL for years.”

She urges every customer to go to Congress.gov and call their congressman, urging them to support all Americans’ rights to hold businesses responsible by voting no on H.R. 985.

The Fairness in Class Action Litigation Act would alter the way class action lawsuits are filed, tried, and resolved. Here are just a few of the numerous provisions of H.R. 985:

Class action lawsuits will be “obliterated,” according to critics.

“If this bill becomes law, it will put an end to class actions in the United States.”

H.R. 985 sparked outcry from civil rights, labor, and environmental organizations, with 70 of them signing a letter denouncing the bill. The AFL-CIO, the Center for Biological Diversity, the Farmworker Association of Florida, the National Disability Rights Network, the National Employment Lawyers Association (NELA), Public Citizen, the Southern Poverty Law Center (SPLC), and the Workers’ Rights Center are among the dozens of organizations that have signed.

“If this bill becomes law, it would eliminate class actions in America,” the letter adds. It’s an outrage that the Committee would contemplate such broad, irresponsible legislation without even conducting a single hearing.”

It goes on to suggest that forcing every member of a class action to have the same kind and extent of harm is unconstitutional.

…would be the death knell for the vast majority of class actions. Classes naturally encompass a diverse group of people, and very never does every member of the group suffer the same “scope” of harm as a result of the same violation. Many human rights, discrimination, and employment class actions, including those involving firms refusing to pay employees correctly, would undoubtedly fail to meet these conditions.

The American Civil Liberties Union (ACLU), the Equal Justice Center, Farmworker Justice, NELA, and the SPLC were among the 121 civil rights organizations who signed a second letter that underlined “the most severe of [the bill’s] numerous damages.”

“Class actions are vital for the enforcement of laws barring discrimination in employment, housing, education, and access to public spaces and services,” the letter states. As a result, these organizations believe that H.R. 985 poses a serious danger to American civil rights.

H.R. 985 supporters argue that detractors’ sky-is-falling hyperbole is exaggerated and misleading. “It wouldn’t seal the courtroom door to consumers, as detractors are likely to assert,” Forbes’ Daniel Fisher writes. It would deter lawyer-driven litigation, in which plaintiff lawyers go after a corporation… knowing full well that the vast majority of their customers would never hear about the case or demand a share of the compensation.”

“There will be a lot of wasted litigation about what the law truly entails,” according to H.R. 985.

Proponents claim that transparency and accountability are beneficial. They argue that reducing the number of frivolous cases filed just to line the wallets of lawyers is a step in the right direction.

Jay Edelson, a well-known Chicago plaintiffs attorney, believes the law is problematic—but not for the reasons most people believe. He doesn’t believe it will “obliterate” class actions, but he does support openness, accountability, and ensuring that lawyers’ fees don’t spiral out of hand (particularly if their clients only get a few dollars).

But Mr. Edelson also says that “There will be a lot of wasted litigation about what the law truly entails,” according to H.R. 985. He says that the similar-type-and-scope-of-harm wording is “unbelievably unclear,” and will inevitably cause delays as the Courts hash out just what that means.

He also believes that a less well-known part of the measure is concerning, if not unconstitutional:

You can’t have a class representative who is a family member or a coworker. That’s all right. However, they go on to explain that if you’ve ever represented them previously, you can’t have them as a class rep. And that’s absurd. Coming in and telling clients, “No, you can’t use your attorney; you have to hire someone you’ve never met before,” is startling and should offend all lawyers. I believe it would be challenged on constitutional grounds. People have the right to choose their own attorney.

One thing that everyone seems to agree on is that this measure will significantly complicate class action lawsuits.

The “covid-19 lawsuit against hospital” is a case that was brought to the United States District Court for the Eastern District of Pennsylvania. The plaintiff, Covidien, is suing the hospital because they claim that the hospital’s negligence led to her husband’s death.