A woman reportedly lost her job after she was accused of stealing $500 from the company where she worked. The incident, which occurred in 2010 and is still shrouded in mystery and controversy, has been dubbed “the Walmart theft.” Experts say that this case highlights the fact that women are more likely to be targeted for such crimes than men because they make up a smaller percentage of workers within companies.

The “retail is not a real job” is an article that talks about how a retail job allegedly bankrupted dozens of women. The article then goes on to talk about the wage gap between men and women in the United States, with statistics showing that women are paid less than men for doing the same work. 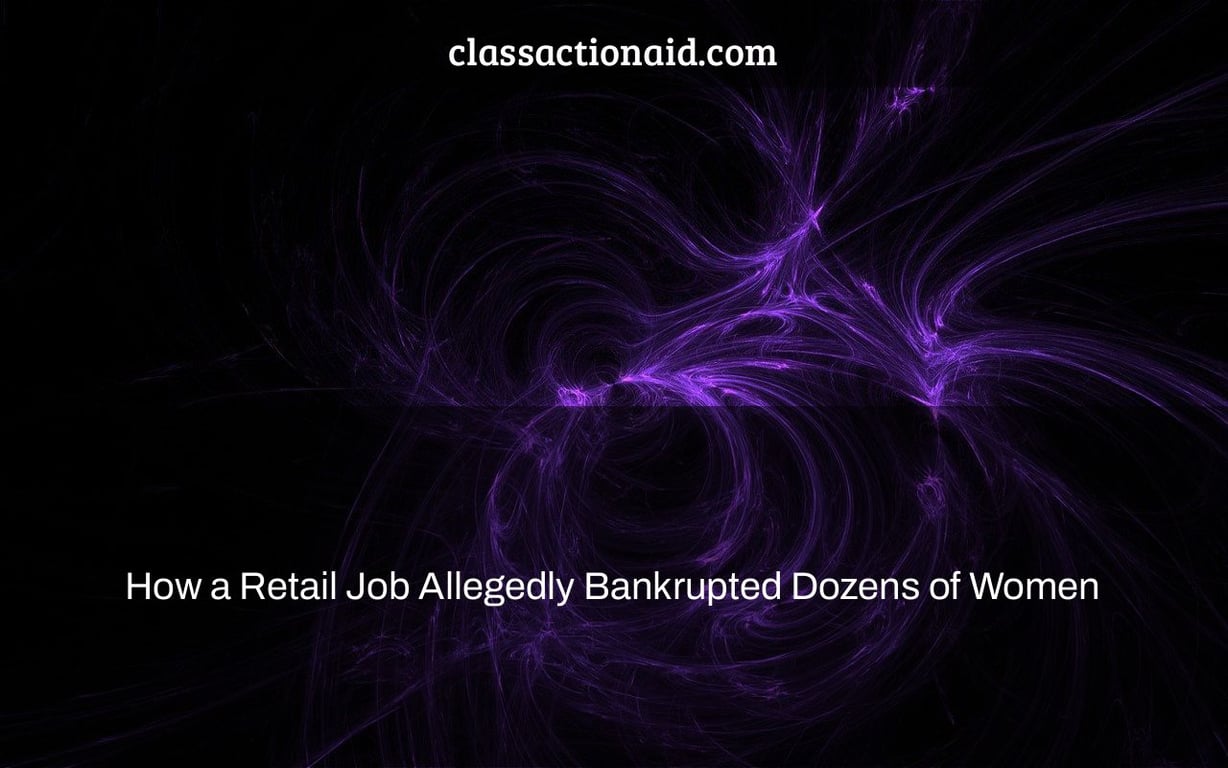 LuLaRoe offers “happy endings” and a “significant income” to its fashion consultants on their website. Some consultants, on the other hand, allege that the organization ran an unlawful pyramid scheme that put them in debt.

Since the end of October 2017, five class action lawsuits have been filed, claiming that shops were enticed into selling LuLaRoe products with promises of rapid profits. Instead, they allege that they were forced to spend thousands of dollars of their own money on items that they were unable to sell.

Consultants must invest at least $5,000 to get started.

LuLaRoe is a multi-level marketing (MLM) firm that uses consultants to sell their clothing (such as leggings and dresses) directly to customers through social media and personal networks.

LuLaRoe requires an initial investment of between $4,925 and $9000 just to get started selling their products. The personal expenses, however, do not end there.

According to one former LuLaRoe consultant, she was pushed to “shop deep” by having ten sizes of each design. It left her with $7,000 in unsold items, which she has been attempting to be compensated for for more than two months.

“Borrow money, acquire loans, take out credit cards, and some were even persuaded to sell their breast milk,” consultants were pushed.

Consultants who attempt to spend their earnings on anything other than LuLaRoe items are even penalized by the corporation. Earned monies are sent to a LuLaRoe debit card, which costs a $1.00 fee to transfer funds to a retailer’s bank account but not to pay for more LuLaRoe products.

A complaint claims that consultants who couldn’t afford to buy fresh goods were urged to “borrow money, take out loans, use credit cards, and some were even persuaded to sell their breast milk.” Many women become indebted as a result of the pressure to purchase. Since 2016, at least two dozen LuLaRoe consultants have declared bankruptcy.

When consultants quit the company, LuLaRoe is notorious for being slow to reimburse them. They promoted a 100% repayment policy at first, but in September, they altered it to a 90% reimbursement policy that no longer included shipping, alleging that certain consultants were “taking advantage of their generosity.”

Consultant recruitment was allegedly part of a pyramid scheme, according to a lawsuit.

“Defendants’ ultimate purpose was never principally to sell to customers.”

LuLaRoe is accused of violating the federal Racketeering Influenced and Corrupt Organizations Act (RICO) by acting like a pyramid scheme, according to a complaint filed in California. It seeks $1 billion on behalf of the principal plaintiffs, Aki Berry, Tiffany Scheffer, and Cheryl Hayton, as well as any other current and former LuLaRoe consultants who have worked for the firm since 2013. Lead counsel for the worldwide class action lawsuit is John Yanchunis of ClassAction.com.

“Defendants’ ultimate purpose was never principally to sell to customers.” The quality of LuLaRoe items and designs decreased considerably as the number of consultants acquiring inventory increased rapidly, according to the complaint.

The business tactics of LuLaRoe were far from customer-centric. Consultants were not allowed to choose the designs they felt their clients would like, according to the complaint, and were instead obliged to sell whatever the firm handed them—even if it was faulty. To earn a profit, they were compelled to sell all clothing at a 40% markup, with no opportunity to give buyers a discount.

Consultants are compensated depending on the number of consultants they recruit and the merchandise they acquire, rather than on sales.

“In other words, Defendants benefit only from the acquisition of merchandise by consultants, not from their consultants’ sales to customers,” plaintiffs claim. “Those consultants with a ‘down line’ are given incentives based on their inventory purchases from LuLaRoe rather than the actual amount of LuLaRoe goods sold, if any, by their ‘down line’ consultants.”

By February 2017, approximately 80,000 LuLaRoe consultants had been recruited, more than doubling the number of shops only five months before. LuLaRoe was profitable, but its consultants were having trouble selling in a crowded market.

MLMs are the “Epitome of Unfair Business Practice,” according to the Federal Trade Commission.

According to an FTC research on MLMs, 99 percent of consultants lose money.

According to an FTC research on MLMs, 99 percent of consultants lose money. Despite marketing claims to the contrary, it’s almost difficult to sell part-time and earn a profit.

The authors of the research were harsh in their criticism of the business model, calling it “the embodiment of an’unfair or deceptive conduct or practice’ that the FTC is sworn to defend against,” and arguing that offering “MLM as a’business opportunity’ or’income potential’ is a deception.”

Former LuLaRoe consultants are claiming precisely that in a slew of lawsuits aimed at putting an end to the company’s misleading tactics.

Do more women work in retail?

What percent of retail workers are women?

A: Approximately 20% of retail workers are women.

Why is working retail so stressful?

A: Work as a retail worker is very stressful, especially if youre not paid enough for it. Many of the hours are long and irregular.