Workplace trends that violate employee rights are on the rise, with companies relying more heavily on technology to make work easier for themselves. This trend has created a world where employees have less control over their time and careers, but there is hope for change if productivity levels go up

The “10 rights of employees” are the most important rights that an employee should have. These include the right to be paid on time, the right to be treated with dignity and respect, and the right to not be discriminated against because of race, religion, or gender. 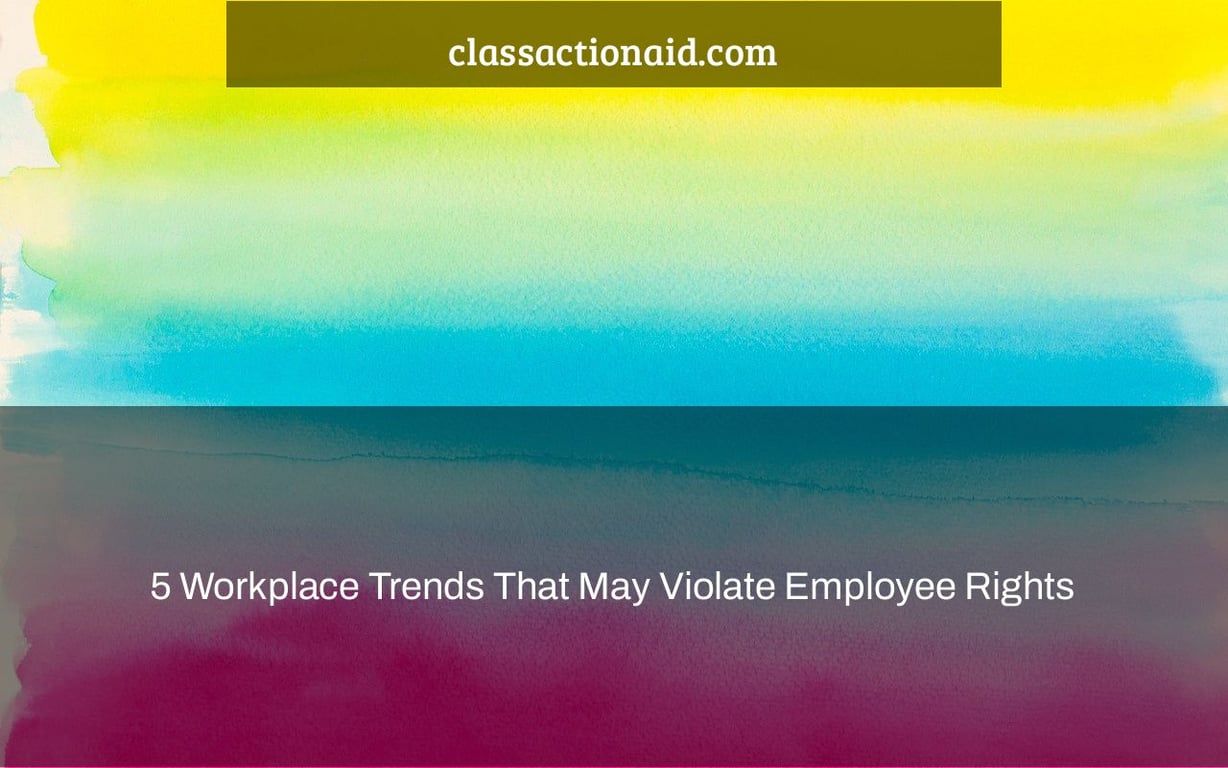 The Digital Age has blurred the barriers between home and office, altering how we define work and the interaction between employees and employers. However, just because the tools or titles have changed does not imply that the employee’s rights have changed as well.

Under the appearance of flexibility, simplicity, or foresight, employers may break labor rules in the following ways.

1. Job postings that are geared at “digital natives”

Companies are effectively stating “over 40 need not apply” by requiring only digital natives.

If a job ad included information on a person’s gender, color, or sexual orientation, it would almost certainly be reported as breaking workplace discrimination rules. Companies, on the other hand, discriminate against older workers when they deliberately seek millennials, sometimes even specifying how many years out of college an applicant should be.

Some organizations utilize more subtle methods to attract younger employees, such as include the phrase “digital native” in the job description. “A person born or raised during the era of digital technology,” according to the Oxford English Dictionary. This is in contrast to “digital immigrants,” who were born before the internet. Companies are effectively stating “over 40 need not apply” by requiring only digital natives.

Similarly, if corporations predominantly recruit on college campuses, older job prospects will be unable to apply. Earlier this year, PricewaterhouseCoopers was sued for age discrimination for doing precisely that.

The Equal Employment Opportunity Commission (EEOC) claims that words like “recent college grad” are illegal under the Americans with Disabilities Act (ADEA). Facebook resolved a complaint with the California Fair Employment and Housing Department in 2013 for requiring job candidates to disclose their college graduation year.

2. Hiring freelancers rather than full-time staff

Uber, Lyft, and Grubhub, for example, contend that the app-based economy helps both employees and consumers. Workers claim that having the freedom to choose their own schedules as independent contractors gives them more flexibility, however “flexibility” may just be a euphemism for avoiding their legal obligations.

Companies are exempt from providing benefits like minimum wage, overtime, and unemployment to these drivers, delivery workers, and others since they are classified as independent contractors. This structure would be OK if workers had all the advantages of being independent contractors, but instead they have to follow rigid company norms and rates, and they don’t have the same level of security as normal employees.

Although there is no precise definition of an employee, the Department of Labor (DOL) promotes a broad interpretation of the Fair Labor Standards Act (FLSA), which ensures minimum wage and overtime pay. According to the DOL, “most workers are employees under the FLSA’s broad categories.”

Many employees are taking things into their own hands by launching class action lawsuits as regulatory bodies continue to define the employer-employee relationship. Uber attempted to settle two driver misclassification claims in California and Massachusetts for $100 million, but U.S. District Judge Edward Chen rejected the offer, claiming it was too modest in a case that may end in $1 billion in fines.

Even though a person is classified as an employee, he or she may be subjected to flexible working arrangements. The practice of “on-call” labor is common in the retail and service sectors. It’s a system that enables companies to reduce the number of full-time employees by bringing in part-timers as needed.

Workers who are on call must often phone ahead or even show up to work without knowing whether they will be required. As a consequence, timetables are erratic, commutes are squandered, incomes fluctuate, and scheduling issues make things like child care impossible to organize.

According to the Economic Policy Institute, 17 percent of the workforce works on-call or on irregular schedules, with the lowest-paid employees making up the majority of this group.

Employees in several areas, such as California, New York, and New Jersey, are protected against last-minute shift cancellations by legislation. Employees must be reimbursed for one hour of work if their shift is canceled within one week, and half of their planned shift’s earnings if the cancellation occurs with less than 24 hours’ notice, according to the California Fair Scheduling Act. Employees in New York are entitled to four hours of labor if they report for a planned shift (either physically or through phone or text).

On-call employment has a negative impact on employees in the app-based economy. Uber drivers should be paid minimum wage for the time they are logged into the app waiting for customers, according to a class action complaint filed in Pennsylvania.

Over the course of 18 months, one employer reportedly viewed an employee’s personal correspondence.

If you use corporate tools during work hours, your files, browser history, and work email are normally within an employer’s legal rights to view. Things become tricky when people work outside of the office, use personal devices for business email, or even access personal email from a corporate device.

Some workers have been successful in suing their companies for invasions of privacy. In one example from 2013, a lady failed to erase her personal email from her Blackberry at work. Her boss is accused of reading her personal emails for 18 months before she even knew it. The court sided with her.

Some employers are deploying GPS software on corporate-owned digital devices and automobiles to track employee locations and productivity in addition to monitoring browser history and correspondence. Once workers are off the clock, this may soon become unlawful.

Myrna Arias filed a lawsuit against her former employer, Intermex Wire Transfers, in 2015, alleging that she was fired after she uninstalled the GPS software from her corporate phone. Arias said the program was tracking her locations while she wasn’t at work. The matter was decided behind closed doors.

Companies are prohibited from accessing electronic messages without authority under the Stored Communications Act (SCA) unless they supply the service.

Companies must also get employee permission before deploying GPS monitoring in states like Connecticut and Delaware. California, Texas, Minnesota, and Tennessee all have laws prohibiting the surveillance of other people’s phones without their permission, regardless of whether they are workers.

An employee may be able to pursue a wrongful termination claim if their employer decides to act on the confidential information they discover. Employees in thirty-one states are now protected from being fired for engaging in legitimate activities outside of work hours.

5. Limiting your ability to file a class action lawsuit

Employees are now required by almost 40% of companies to forgo their right to launch a class action lawsuit. Employees cannot opt out of these binding arbitration agreements, which are commonly hidden in employee handbooks.

Employers believe that arbitration, like other ways for stripping workers of their rights, permits legal disputes to be handled more quickly by doing so outside of court with a private arbiter.

Employees, on the other hand, are less likely to win conflicts brought in arbitration, and they get less money than in cases tried before a judge and jury in court. Employee lawsuit awards were five to ten times higher than arbitration awards, according to a Cornell University research, and workers only won 21% of all workplace arbitration disputes between 2003 and 2007.

The United States Supreme Court will shortly rule on whether or not employee class action waivers are permissible. Three employers are now being investigated by the court: Murphy Oil, Epic Systems, and Ernst & Young.

Do you feel the desire to retaliate?

Contact us immediately for a free legal review if you were refused minimum wage or overtime, were misclassified or discriminated against, or were denied any other employee right. Our lawyers have helped corporations collect more than $4 billion in damages.

What are some common employee violations?

A: Common employee violations are not bringing in a cold drink on hot days and letting their co-workers do the work for them.

What are some of the trends impacting workplace employers?

A: A lot of employers are looking for people with leadership skills and those who can work well in teams. Additionally, a strong resume will be able to get you into any type of job as it displays your experience and gives the employer more information on what theyre getting when they hire you.

Which human rights are most frequently violated at workplace?

A: In the United States, it is estimated that approximately 40 million people experience some form of human rights violation at work. The most common types of violations are not being paid for their labor and safety issues on the job.