Hernia meshes are commonly used as a surgical treatment for inguinal hernia. They offer minimal incisions, faster recovery times and reduced pain from the surgery over traditional surgeries. However mesh complications can happen often due to improper technique or mis-diagnoses of other injuries that make it difficult for patients to have them removed without further injuring themselves or their organs . 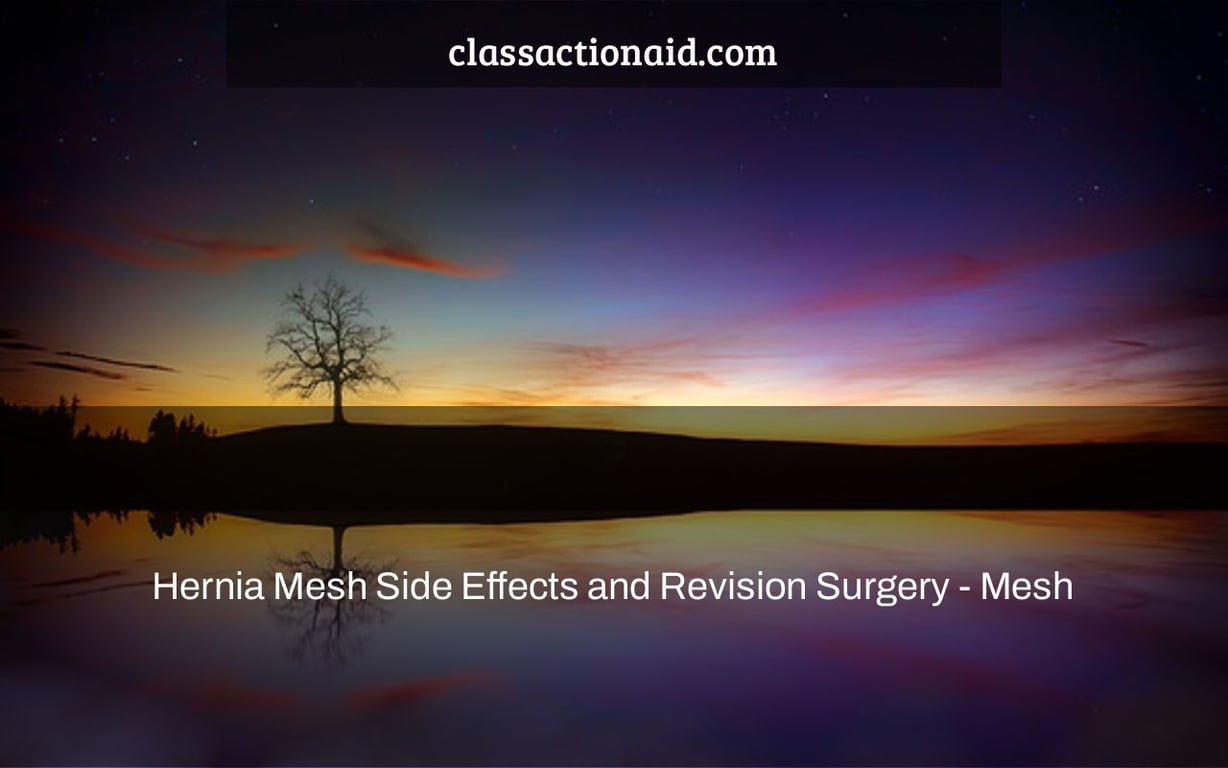 When a hernia is repaired, the surgeon will often employ surgical mesh to reinforce the weaker tissue (often abdominal tissue). Many hernia meshes are composed of synthetic materials, however others are made of cow or pig tissue.

Many patients have sued mesh makers like as Ethicon and Atrium, seeking compensation for medical expenditures, lost earnings, and Suffering and pain.

Surgical meshes, however, may result in major consequences such as ruptured intestines/bowel, Peritonitis, bowel blockage, sepsis, or abscess. In these circumstances, the patient will almost certainly need revision surgery to address the issues caused by the hernia mesh.

Many patients have sued mesh makers like as Ethicon and Atrium, seeking compensation for medical expenditures, lost earnings, and Suffering and pain. If you or a loved one has suffered serious side effects as a result of your hernia mesh, please contact us today to learn if you might qualify for compensation.

Side Effects of Hernia Meshes and Revision Surgery

In May 2016, Ethicon—a subsidiary of Johnson & Johnson—pulled its Physiomesh Flexible Composite Hernia Mesh from the market due to high revision rates and hernia recurrences after hernia repair surgeries. Ethicon said these complications were a “multifactorial issue” that could include “product characteristics.”

Seven months later, health officials in Europe and Australia recalled Physiomesh for the same reasons, citing side effects such as Obstruction of the bowels, pain, seroma (buildup of fluid in tissue or organ), and hernia recurrence. By this time, many patients in the U.S. had already filed lawsuits against Ethicon/J&J.

Patients have also filed cases against Atrium, the maker of the C-Qur hernia mesh, which has been linked to significant adverse effects. The C-Qur mesh is coated with Omega 3 fish oil, according to plaintiffs, which may induce an allergic response in certain individuals.

Check out our infographic about hernia mesh.

Some claim that the fish oil in the C-Qur mesh caused their bodies to reject it. Others claim that the polypropylene mesh floats away from its intended tissue and becomes a foreign object, sticking to other organs in certain circumstances. According to them, this led to several revision procedures to remove the renegade mesh.

While Atrium has not officially recalled its C-Qur mesh, lawsuits claim that it did so in secret because to allegations of harmful side effects.

The claims against Atrium C-Qur have now been consolidated into a multidistrict action (MDL).

Johnson & Johnson Is No Stranger to Litigation

Johnson & Johnson, the parent company of Ethicon—which makes the Physiomesh hernia mesh—is no stranger to litigation, especially in recent years. The pharmaceutical giant has faced lawsuits over its talcum powder, Risperdal, Xarelto, and DePuy hip implants.

In 2016, Missouri juries hammered J&J with three massive verdicts in favor of plaintiffs who claimed that they or their family had contracted ovarian cancer after using Johnson’s Baby Powder for feminine hygiene. The first award was for $72 million, the second was for $55 million, and the third was for $70 million.

A jury in Philadelphia, too, rocked Johnson & Johnson with a verdict in favor of the plaintiff—this time for a young man, Andrew Yount, who claimed to have developed breasts after taking the antipsychotic drug Risperdal. That award was $70 million. Other Risperdal plaintiffs won $1.75 million (Nicholas Murray) and $2.5 million (Austin Pledger) in 2015.

J&J also paid a $2.2 billion fine to the Justice Department over its unlawful promotion and marketing of Risperdal.

Prior to that, Johnson & Johnson settled thousands of claims related to its DePuy ASR hip implants for a jaw-dropping $4 billion. Like the Physiomesh cases, those lawsuits featured many plaintiffs who said they needed revision surgeries because of complications from a J&J medical implant.

Sepsis and Obstruction of the bowels are two complications associated with mesh implants.

Plaintiffs in hernia mesh cases have described significant and painful adverse effects. The following are some of them:

Naturally, many individuals who suffer from these health concerns are forced to have revision procedures in order to remedy the abnormalities. If you or a loved one had any of these negative effects after receiving Physio or C-Qur mesh during a laparoscopic hernia surgery, please call us immediately away for a free legal consultation.

Lawsuits involving hernia mesh generally make claims for some combination of the following:

The following damages are sought in these lawsuits:

In 2011, C.R. Bard reportedly agreed to pay $184 million to settle roughly 2,600 Lawsuits involving hernia mesh—or $70,000 per plaintiff. For more on these types of precedents, see our hernia mesh lawsuit page.

Our lawyers have helped plaintiffs collect more than $4 billion in damages.

If you or a loved one received a hernia mesh implant in laparoscopic surgery and then experienced serious side effects that required revision surgery—such as intestines perforated/bowel, Peritonitis, Obstruction of the bowels, sepsis, or abscess—you should speak with our legal team as soon as possible. Our attorneys have recovered more than $4 billion for our clients, and we are one of the only consumer protection firms in the country with the resources to take on a large company like Johnson & Johnson.

Unless we win a jury award or a settlement, there are never any fees. For a no-cost, no-obligation legal consultation, contact us now.

Hernia mesh is a surgical procedure that can be used to repair an inguinal hernia. The surgery is performed by placing a mesh over the hernia and then sewing it shut. Hernia meshes are made of polypropylene, which is a type of plastic, and they are inserted through small incisions near the groin. It was previously thought that hernia meshes were safe for use in any patient. However, recent studies have shown that there may be side effects from long-term use of hernia meshes. These side effects include: pain after surgery, infection at the site of insertion, skin irritation, or erosion of the mesh into surrounding tissue. Reference: is hernia mesh safe 2021.

What are symptoms of mesh problems?

A: Symptoms of mesh problems could be wet spots on the walls, mold starting to form and a musty smell.

What are the symptoms of a hernia mesh going bad?

A: A hernia mesh going bad may cause a bulge in the abdomen that feels like a hard mass, which can range from small to large. In some cases, this bump is painful and difficult to push down or move around. Other symptoms of an improperly functioning hernia mesh include foul odor when pressing on it, pain with intercourse or bowel movements and blood clots in urine

What happens when a hernia mesh fails?

A: A hernia mesh is a temporary surgical device used to reinforce the abdominal wall, which contains an opening (incision), as well as any sutures that are used for repair. The goal of this surgery is to reduce or eliminate pain caused by the intestine pushing on other organs in your abdomen because of weakness in the abdominal muscles. Hernia meshes may fail when they come into contact with another organ and cause bleeding. This can result in bowel perforation, which causes internal bleeding within your abdomen and requires immediate medical attention