The makers of Eliquis, a blood-thinning drug used to treat heart attacks and strokes, are facing accusations that the medicine caused more than 1.6 million injuries in its first year on the market.

Eliquis is an anticoagulant that is used to prevent clotting. It has been approved by the FDA for use in many cases. However, there are some side effects that may need to be addressed. 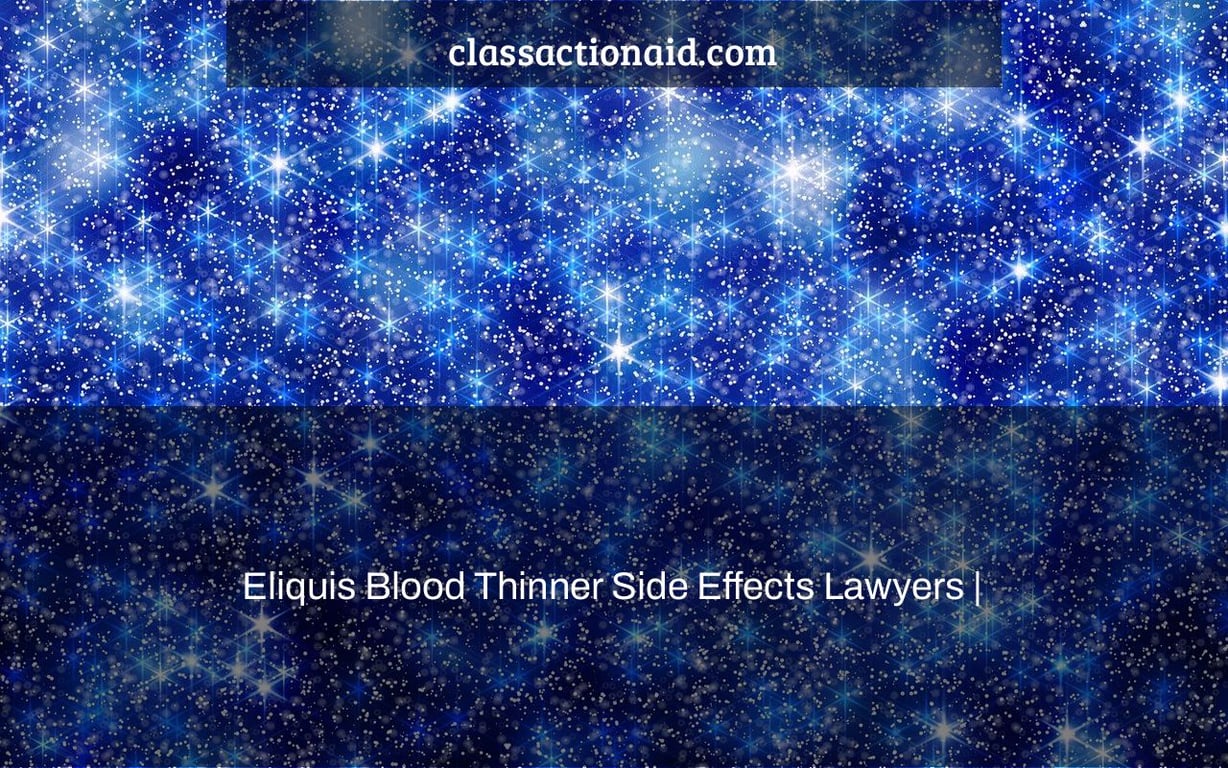 While Eliquis commercials emphasize the drug’s advantages, they leave out the danger of catastrophic, uncontrolled bleeding.

Eliquis (apixaban), a blood thinner, has been related to severe, perhaps deadly bleeding that cannot be reversed with an antidote.

Eliquis was first marketed in 2012 as a better anticoagulant than warfarin. However, some experts question if Eliquis is really safer or more effective than warfarin. The veracity of the clinical evidence used to approve Eliquis has also been questioned.

Eliquis sales have surged as a result of an intensive marketing effort, and the drug’s developers have made billions of dollars. However, although Eliquis commercials extol the drug’s “benefits,” they neglect to emphasize the absence of a bleeding reversal agent and the importance of this issue for patients who have severe, uncontrolled bleeding.

Patients who have been affected by Eliquis have filed lawsuits against Bristol-Myers Squibb and Pfizer, demanding monetary damages for bleeding issues.

Eliquis was launched in the United States in 2012. It’s the newest blood thinner (anticoagulant) to replace warfarin, which has been on the market since the 1950s.

Eliquis competes with Xarelto (rivaroxaban) and Pradaxa, two other blood thinners (dabigatran). All three medications work in the same way and are authorized by the FDA to treat the same diseases.

Eliquis may be administered for a variety of reasons:

Eliquis belongs to the “Factor Xa inhibitors” family of medicines.

Factor Xa is an enzyme that aids in the coagulation of blood. The active component in Eliquis is apixaban, which inhibits (or blocks) Factor Xa. Eliquis minimizes the risk of a blood clot by inhibiting Factor Xa.

Bleeding Side Effects of Eliquis

All anticoagulant medicines carry the risk of hemorrhage because they prevent blood from clotting. When the body is harmed and bleeding has to be halted, blood clots are generally desired. Anticoagulants, on the other hand, may induce bleeding since they hinder clotting. These bleeds have the potential to be lethal.

Patients using Eliquis have suffered hemorrhages in the following areas:

The Institute for Safe Medicine Practices (ISMP) keeps track of adverse event reports related to drugs marketed in the United States. ISMP documented the following Eliquis side effects in 2014:

For decades, warfarin, which was authorized in 1954, was the industry-standard blood thinner. Warfarin is a tried-and-true medication for patients at risk of significant, debilitating blood-clot-related events such as stroke, while not being a flawless medicine (remember, all anticoagulants carry the risk of bleeding problems).

Generic blood thinners cost less than $20 per month, while Eliquis costs $300 or more per month.

Drugs like warfarin that have been on the market for a long time (at least from the viewpoint of a drug company) lose their patent protection and may be offered inexpensively as generics. Manufacturers get the exclusive right to market pharmaceuticals without generic competition by patenting new drugs, hence raising profit margins. For example, generic warfarin costs less than $20 per month, but the new anticoagulants Eliquis, Xarelto, and Pradaxa cost $300 or more each month.

This is why Eliquis’ producers promise that, unlike warfarin, the treatment doesn’t need frequent blood tests, dietary restrictions, or dosage modifications. Furthermore, clinical studies have shown that Eliquis decreases the risk of stroke better than warfarin and causes less severe bleeding than warfarin, according to BMS and Pfizer.

However, the scientific studies that these claims are founded on have been questioned due to reported fundamental flaws.

The Food and Drug Administration (FDA) put Eliquis on hold for nine months due to problems with clinical trial sites in China (drug companies are turning to Chinese clinical trials because they are cheaper to run).

The ARISTOTLE (Apixaban for Reduction in Stroke and Other Thrombotic Events in Atrial Fibrillation) trial, which compared Eliquis to warfarin, had a number of issues, according to the FDA:

When the data—which claims to indicate that Eliquis is better than warfarin in avoiding stroke and deaths—was published in the New England Journal of Medicine (NEJM), former NEJM editor Dr. Arnold Relman argued the research was too defective to be published.

Dr. Relman points out that the ARISTOTLE research had many important flaws that were not highlighted in the report’s discussion, including the following:

These constraints, according to Relman, are due to financial links to the pharmaceutical sector. ARISTOTLE was financed by Bristol-Myers Squibb and Pfizer, and three of the study’s authors were BMS employees, according to the study’s small print.

Surprisingly, research has shown a correlation between a pharma company’s investment of clinical research and good drug trial results.

The claim that Eliquis is “safer” than warfarin is doubtful, not just because of uncertain safety data, but also because Eliquis lacks an antidote that may halt internal bleeding, which can be deadly if left untreated.

On the product website and in commercials, Bristol-Myers Squibb and Pfizer are happy to bring out the advantages of Eliquis over warfarin, but they are less forthright about how the absence of a bleeding antidote may lead to life-threatening outcomes.

Eliquis does not come with a boxed warning about the absence of a bleeding antidote.

Warfarin-related hemorrhagic consequences may be treated with the use of vitamin K and other medicines. However, when an Eliquis patient has serious bleeding, the drug’s blood-thinning effects cannot be reversed, making catastrophic consequences more probable.

Eliquis is being aggressively promoted to patients and doctors.

Following the FDA’s approval of Eliquis, BMS/Pfizer launched a multi-million dollar marketing effort to promote the medicine. According to ProPublica, BMS/Pfizer has paid approximately 96,084 physicians more than $45.9 million in physician payments, in addition to substantial public promotion through TV and print.

Pharmaceutical corporations assert that spending on doctors ensures that doctors learn how to utilize their treatments appropriately, whereas doctors have long stated that payments from pharmaceutical companies have little impact on their prescription habits. However, common sense and evidence suggest that the more money drug firms pay doctors, the more medications they prescribe.

The non-profit ProPublica conducted an investigation as part of its Dollars for Doctors initiative, which validated this pattern. “On average, the more money [doctors] earn, the more brand-name pharmaceuticals they prescribe,” ProPublica concluded.

The “eliquis complaints” is a drug that has been on the market for over 10 years and has not had any major side effects. However, there are still people who have experienced some minor side effects.

Is Eliquis in a lawsuit?

Can Eliquis cause death?

A: Eliquis is indicated to be safe and effective. It may cause death in rare cases, but the risk of serious side effects are low.

What blood thinner has been recalled?

A: There has been no recall for blood thinners.