The Catholic Church’s child sexual abuse scandals have been ongoing for decades. The institutionalized culture of fear and hierarchy created a system that was difficult to understand, let alone overcome without help from outside resources. By the time a victim reaches adulthood, they often learn that justice is no longer an option because of statute-of-limitations laws, lack of evidence and/or damaged memories 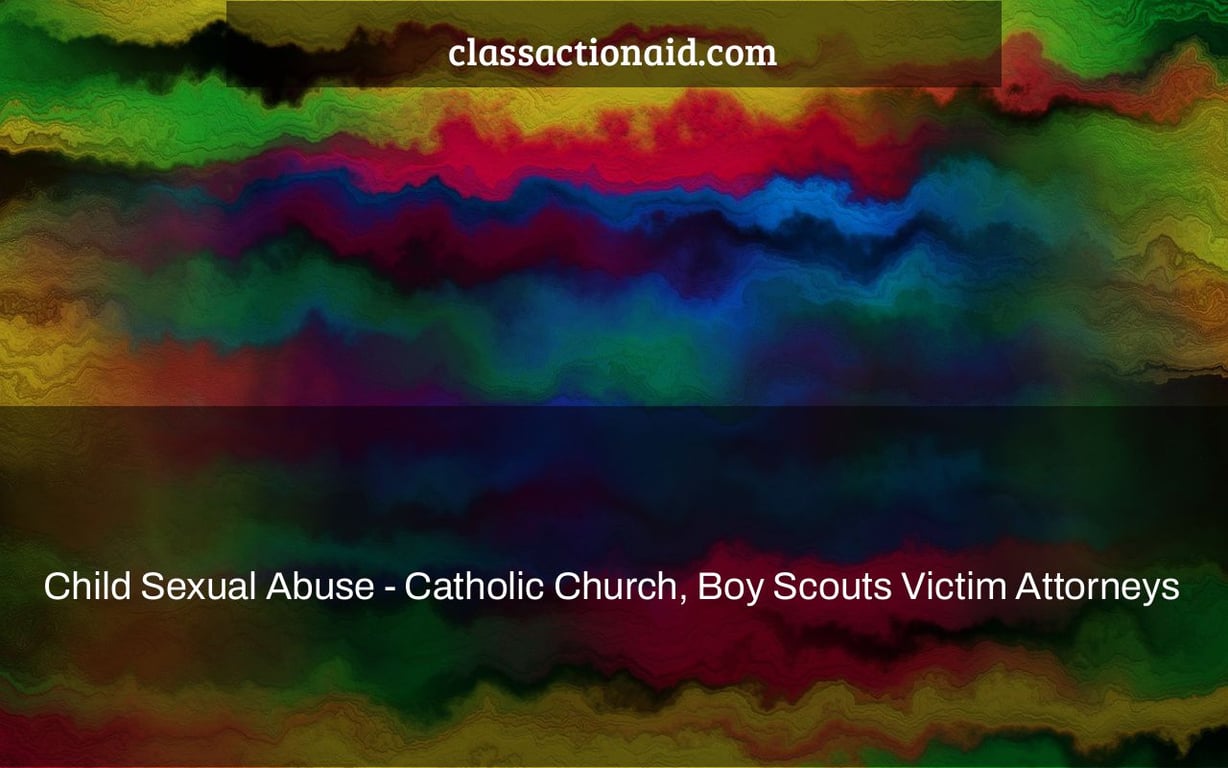 Victims of child sexual abuse are seeking justice and compensation from institutions that failed to protect them, such as churches, summer camps, schools, religious groups, and youth leisure organizations such as the Boy Scouts of America.

Every day, it appears as though a new child sex abuse story breaks, with each one involving another key American civic or religious organization accused of turning a blind eye to, or actively covering up, the horrendous abuse of thousands of innocent children.

So many churches, schools, summer camps, and recreational organizations, such as the Boy Scouts of America, have now been accused of turning a blind eye as clergy, staff, and youth leaders took advantage of their positions of authority and trust to horrifically abuse the children they were entrusted to teach, lead, and protect.

Is it Already Too Late?

Survivors from all throughout the nation are demanding justice as our society slowly wakes up to this tragedy. Friends, family, the community, and the judicial system are all ready to hear and believe survivors for the first time. Despite this, the law states that many of these victims are unable to seek justice.

Because of statutes of limitations in place throughout the nation, instances of abuse from the 1960s, 1970s, 1980s, and even the 1990s in certain jurisdictions can no longer be prosecuted in criminal or civil court.

Legislators and campaigners, on the other hand, are striving to alter it. Many states, including California, New York, and Pennsylvania, have recently approved or are contemplating legislation that would extend the statute of limitations for reporting sexual assault as a kid. Many survivors may now pursue cases in areas where the legislation has been altered, even if the abuse occurred decades ago.

These reforms have been applauded by victim support organizations from those states and throughout the nation. This is a significant step forward in our efforts to assist child sex abuse victims in receiving some degree of justice and recompense for the pain and suffering they have endured.

An Opportunity for Justice

As a result of these developments in the legislation, many victims of child sexual abuse now have or will soon have the legal right to sue the institutions that permitted the abuse. As a result, many people who had given up hope of ever seeing justice are now entitled for compensation.

Anyone who has or knows someone who has been sexually abused as a kid in a church, summer camp, or youth recreation group such as the Boy Scouts is advised to contact our child sexual abuse lawyers right once to discover whether they are qualified for compensation.

Many victims now have an opportunity to redeem themselves. Victims have the option to seek justice and recompense for their suffering as well as the costs of treatment and counseling that might accompany the lifetime process of survival and recovery.

What Are the Consequences of Sexual Abuse Against Children?

Sexual abuse of children may have long-term, severe effects on the victim. Depression, anxiety, post-traumatic stress disorder, and other psychological problems are common among such victims. These things may have a negative impact on one’s personal and professional life.

Panic attacks, a lack of work ethic, impatience, and trust difficulties are all signs of mental diseases caused by child sexual abuse. All of these have a direct influence on the victims’ lives, potentially resulting in lower lifetime wages, social alienation, and family issues.

I’m not sure how I’m going to get justice.

Don’t hesitate to contact a knowledgeable and experienced attorney if you or a loved one was sexually abused as a child on the facilities of – or while under the care and responsibility of – a church, school, summer camp, youth recreation program, religious organization, or other institution.

You may be able to file a legal claim for large compensation depending on the legislation of the state where the abuse happened, among other criteria. But don’t put it off any longer. Statute of limitations legislation may restrict your window of chance.

How much money do sexual assault victims get?

A: The average amount of money received for a sexual assault victim is about $190.

What is 3rd degree sexual assault?

A: 3rd degree sexual assault is a crime that refers to certain types of aggravated indecent assault. Such crimes range from groping, fondling, or touching the private body parts of another without consent, and in some cases can also include non-contact acts such as exposing ones genitals.

What is second degree sexual assault?