The United States has some of the highest drug prices in the world, with one report finding that Americans spend more on prescription drugs than citizens from any other country. One possible explanation for this is a lack of competition among manufacturers and distributors who are often accused of colluding to keep their own margins up at the expense of American consumers. 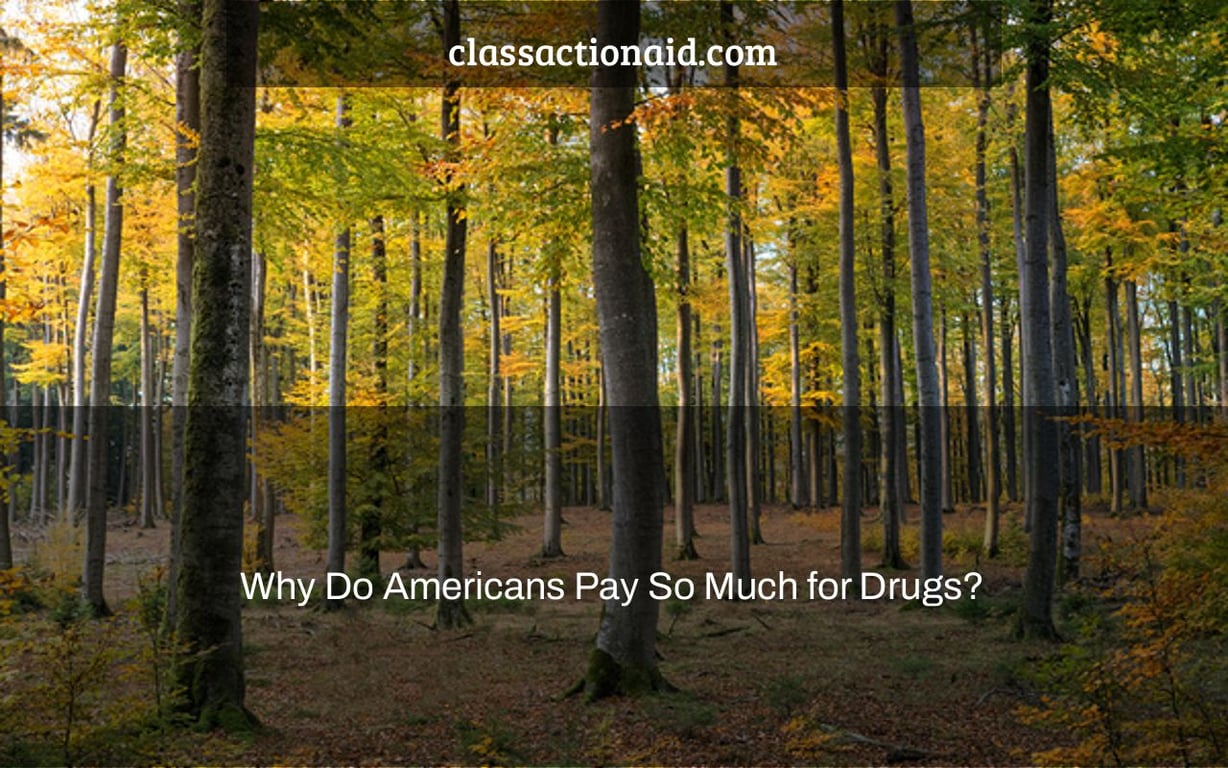 The exorbitant cost of pharmaceuticals is one of the few topics on Capitol Hill that has bipartisan support.

During a news conference on January 11, President-elect Donald Trump slammed the pharmaceutical business, saying, “[drug firms] are getting away with murder—pharma has a lot of lobbyists and a lot of influence.” There isn’t much bidding on medications; we’re the world’s biggest buyer of drugs, yet we don’t bid effectively.”

“The drug cartels get away with murder.”

“The American people pay the highest prices in the world for prescription drugs, millions cannot afford the medicine they desperately need, but at the same time, the drug companies make out like bandits and their CEOs earn exorbitant compensation packages,” Senator Bernie Sanders said from the Senate floor on the same day.

Mr. Trump, Mr. Sanders, and Hillary Clinton have all advocated a straightforward cure to decrease prescription costs in the last year: enabling Medicare, which is operated by the federal government, to negotiate drug pricing directly with manufacturers. It’s a viewpoint shared by 93 percent of Democrats and 74% of Republicans.

Contempt for Big Pharma might be the common denominator that unites populists on the left and right. However, for a variety of reasons, decreasing medicine costs is not as straightforward as permitting Medicare price negotiations.

The Cost of Medicine in Numbers

How much do prescription medications cost in the United States? The figures below assist to highlight a problem that has sparked significant outrage:

According to the Center for Responsive Politics, the pharmaceutical and health goods business outspends all other industries in political lobbying.

Many lobbyists for pharmaceutical companies are so-called “revolvers,” who have previously held government jobs. According to Mother Jones, more than 60% of the pharma industry’s lobbyists have traveled through the revolving door from government to lobbying in the previous 13 years.

The pharmaceutical business is also a major contributor to federal political campaigns. Pharmaceutical companies have always been major donors to House and Senate campaigns. Drug firms spent more than $19.5 million on congressional elections in 2016.

In the years preceding up to the 2003 adoption of Medicare Part D, a prescription drug benefit that subsidizes prescription medication prices for Medicare recipients, industry expenditure grew. The scheme, however, has an unexpected restriction: the federal government is prohibited from negotiating medication pricing with manufacturers under the Part D statute.

Mr. Trump, Mr. Sanders, and others have advocated removing this prohibition and enabling Medicare to decide (and possibly decrease) prescription costs.

Given that the US government is the nation’s (and the world’s) single-largest prescription medication consumer, it makes sense.

There are more drug lobbyists in Washington, DC than there are members of Congress.

So why have so many legislation that would enable such conversations failed in the previous 13 years? The same reason the Part D limitation was put in place in the first place: the pharma industry’s lobbying machine.

Rep. Peter Welch said, “It’s Exhibit A in how crony capitalism operates” (D-VT). “How in the world can one explain how the government really enacted a legislation prohibiting price negotiation?” Campaign money and lobbying clearly had a significant role in bringing about that unexpected result.”

Negotiations with Medicare aren’t a panacea.

Allowing Medicare to negotiate prescription costs is a popular reform proposal, but skeptics argue that lifting the Part D negotiation prohibition would not always result in cost savings.

Allowing Medicare to negotiate medication costs, according to the Congressional Budget Office, would have a minor budgetary effect.

According to John Rother of the Campaign for Sustainable Rx Pricing, if the government could negotiate drug costs, it would likely concentrate on the most costly Medicare-covered pharmaceuticals.

Six “protected classes” of drugs linked with difficult conditions such as HIV, cancer, and epilepsy are covered by Medicare Part D. Part D gives patients access to “all or nearly all” of these groups of drugs. In other words, since it does not have the ability to reject coverage for protected pharmaceuticals, the government has less negotiating strength.

According to Peter B. Bach of Memorial Sloan Kettering Cancer Center’s Center for Health Policy and Outcomes, private health care insurance laws “force insurers to include essentially all expensive drugs in their policies, and a philosophy that demands that every new health care product be available to everyone, no matter how little it helps or how much it costs.”

Prescription medications cost half as much in Europe as they do in the United States.

Allowing insurance companies to say “no” to a small number of pharmaceuticals each year, as several European nations do, might significantly reduce prescription costs. Prescription medications cost half as much in Europe as they do in the United States.

The Department of Veterans Affairs (VA) in the United States has greater flexibility in formulary development than Medicare. The VA only covers roughly 59 percent of the 200 most common prescriptions, while Medicare covers 85 percent and certain private companies cover 93 percent. According to one estimate, the VA spends 40% less for medications than Medicare.

However, limiting consumer choice is a politically sensitive topic. When the Obama administration suggested eliminating several medication categories from the Part D protected list in 2014, it was met with overwhelming patient opposition, resulting in a $1.3 billion yearly savings.

According to one estimate, the VA spends 40% less for medications than Medicare.

Price limitations have a disadvantage as well. Medicare could save $155 billion over 10 years if it obtained the same discounts as the VA. However, since pharma firms spend around a quarter of their income on research and development, this savings would mean a $36 billion reduction in new medication development over a ten-year period.

In the debate of drug prices, lumping all pharmaceuticals together oversimplifies a complicated problem.

Five separate medication pricing narratives have been written about by doctors Ari B. Friedman and Janet Weiner, each with its own reasons and solutions.

Turing Pharmaceuticals slashed the price of Daraprim by 5,000 percent in a matter of hours.

They believe that certain pharmaceuticals, such as the Hepatitis C therapy Sovaldi ($1,000 per tablet), are cost-effective despite their high cost since they cure illnesses with catastrophic consequences and inadequate therapies, resulting in a net social gain.

Other medications, on the other hand, are relatively new and pricey, yet they are ineffective. Their low worth does not imply a favorable cost-benefit analysis.

The so-called “moral hazard” of insurance, or the assumption that having health insurance drives consumers to utilize more—and more expensive—medical goods and services, resulting in expenditure rises and inefficiencies, complicates things even further. In this sense, more consumer knowledge about prescription prices and advantages, particularly for moderately effective treatments, might assist to lessen the moral hazard associated with insurance.

Another factor influencing prescription prices is the FDA’s sluggish drug approval process, which has resulted in limited generic competition. Companies have been purchasing formerly affordable generic pharmaceuticals and dramatically hiking costs, such as Turing Pharmaceuticals’ infamous Daraprim, which was marked up 5,000 percent overnight.

Huge price increases like these should, in theory, lead to greater competition and reduce costs, but according to Drs. Friedman and Weiner, the FDA’s three-year wait for generic medication applications hinders market competition.

These diverse narratives demonstrate that cutting medicine costs is not a one-size-fits-all answer. They also claim that well-intentioned health-care policies, such as FDA regulation, might have unanticipated price repercussions.

Big Pharma is to blame for the high cost of drug development.

A drug’s development costs are estimated to be $2.6 billion.

The Tufts Center for the Study of Drugs published a report in 2014 that estimated the cost of developing a prescription drug from the lab to FDA approval at $2.6 billion. This is a 145 percent increase above the cost estimate from 2003.

The $2.6 billion amount covers both direct expenditures, such as testing and research, as well as indirect opportunity costs, or the money the corporation might have gained if it hadn’t spent in medication development.

Even if these numbers are correct, they don’t explain for the 164 percent rise in medicine prices since 2008. Furthermore, there are various flaws in the cost estimate.

To begin with, the Tufts study is mostly financed by the pharmaceutical industry, which has a major interest in propagating a high-cost medication narrative.

The report also only considers new molecular entities, which are the most expensive drugs that companies develop. Furthermore, the estimate excludes taxpayer-funded new drug development through the National Institutes of Health and other organizations. Drug research costs are also tax deductible, so the public foots a portion of the bill.

Finally, the study conveniently overlooks the fact that pharmaceutical corporations spend twice as much on marketing and promotion as they do on research and development.

None of this is to suggest that creating new pharmaceuticals isn’t costly or crucial for the future of medicine.

It’s not as if Americans are resentful of Big Pharma’s success. Our free-market system is based on a “quid pro quo” agreement in which inventors profit from creating items that benefit the general population.

Fairness is at the heart of high medicine pricing. Drug businesses aren’t bound by the same regulations as other industries, where high costs deter customers.

“A pharma manufacturer may raise the price of a product several times and people will still purchase it because they need it,” says Johns Hopkins University’s Dr. Kevin Riggs. “At the end of the day, they charge whatever the market will bear—which is a lot in the case of life-saving drugs.”

The majority of Americans say the government should intervene in medicine pricing to prevent Big Pharma from “getting away with murder.”

Consumers may help by requesting for generic pharmaceuticals wherever feasible, speaking out against increasing drug prices, and holding businesses responsible for harmful drugs, in addition to whatever price control measures the next government may take.

The “drug prices by country” is a question that has been asked for a long time. There are many factors that go into the cost of drugs, such as how much it costs to manufacture and import them.

Why are drug costs so high in the United States?

A: Drug prices are higher in the United States for a variety of reasons including high demand, lack of competition and strict patent laws.

Does the US have the highest drug prices?

A: The US has the highest drug prices, but thats not just because of pharmaceutical companies. It is due to a lot of factors such as insurance and demand for prescription drugs in general.

What country has highest drug prices?

A: The United States has the highest drug prices for a number of reasons, but primarily because pharmaceuticals are heavily regulated in America. In Canada and Europe, where governments have more influence on how drugs are sold to consumers, there is less regulation and lower rates than those found in the US.