A lawsuit is a legal proceeding. The length of these proceedings significantly varies depending on the jurisdiction and type of dispute being litigated, but they generally last from several months to years or even decades (depending on how determined one party’s case may be).

A civil case is a type of lawsuit that is filed in the federal or state court system. A civil case has 7 steps, which are: 1) filing the complaint, 2) service of process, 3) setting a trial date, 4) notice to defend, 5) discovery, 6) pretrial conference, and 7) trial. 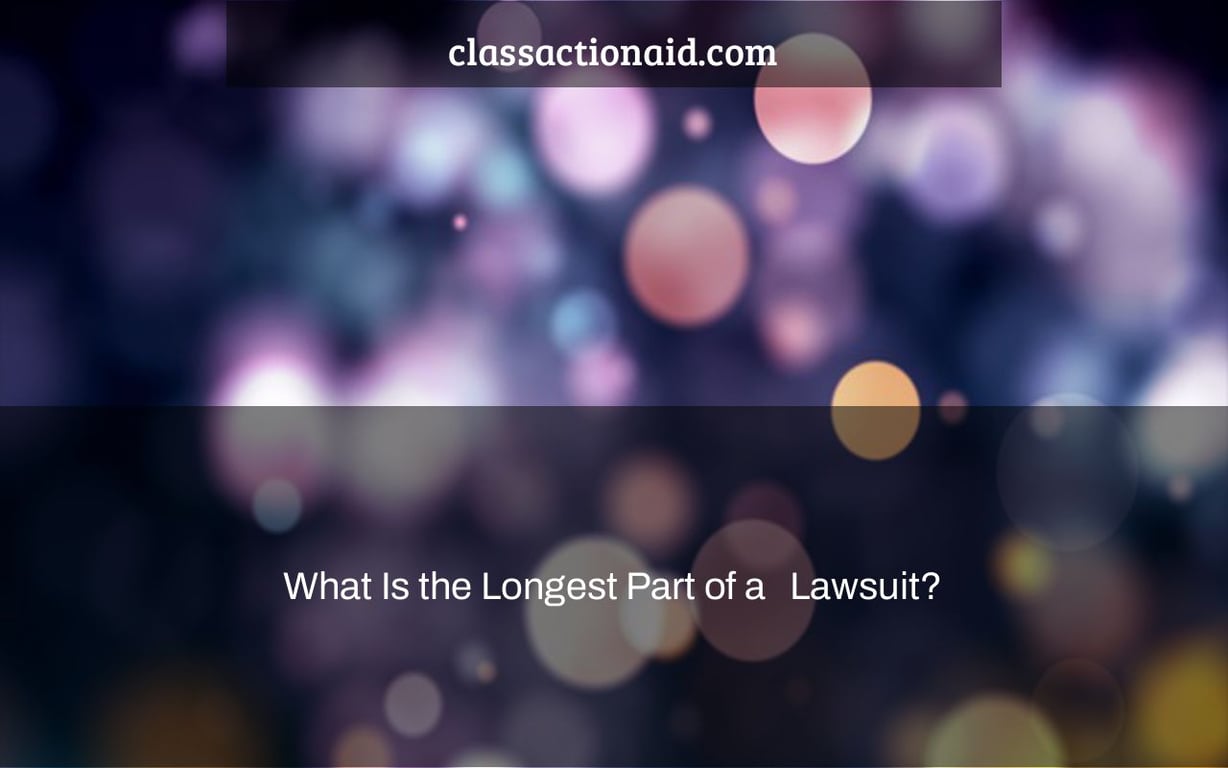 It’s impossible to tell if one step of a class action lawsuit takes the longest in every instance, but depending on the facts of the case, there are various moments in the litigation that might cause delays.

Class action lawsuits allow a small group of individuals, or even a single consumer, to bring a claim on behalf of a large number of others who have been injured. Class action lawsuits are an essential tool for consumer protection because they allow consumers to hold firms responsible for losses that may seem little to an individual but mount up when a large number of people experience the same harm.

The lead plaintiff or plaintiffs propose to represent all people who they believe were similarly damaged by the defendant’s behavior, generally known as the “Class,” in a class action case. In the end, class action lawsuits seek remedy on behalf of the class, whether via a trial decision or a settlement agreement.

The following are the stages of a class action lawsuit in general:

What is the definition of discovery, and how long may it take?

The discovery phase of a class action lawsuit is often postponed, making it a potentially lengthy stage of the case.

In a litigation, discovery refers to the exchange of information between the plaintiffs and defendants concerning the evidence they have to support their case at trial. To do so, witnesses are interrogated (also known as a deposition), and the parties demand further evidence, such as records or other papers.

The parties must file with the court in order to communicate this information or seek a deposition. Despite the fact that discovery requests usually have a timeframe, the parties may submit challenges to them. These discovery disagreements are what might cause the discovery process to drag on.

How Long Will It Take for the Settlement to Be Approved?

When the proposed Class is certified, settlement discussions normally begin, and they last less than a year – hardly a long time in the legal world. However, ratification of the parties’ proposed settlement might face certain challenges, delaying the payment of Class Members’ claims.

The amount that will be awarded to the Class, the plaintiffs, and attorney costs, as well as a description of how notification will be issued to Class Members and a release of responsibility for the defendants, must all be included in settlement agreements.

The following processes are normally followed when a settlement is approved:

The approval of a settlement agreement might take a long time. While the parties must agree to make a motion for preliminary approval, Class Members may raise objections to the settlement, which must be addressed before final approval is granted. Delays may also be caused by issues in notifying Class Members.

If the court finds that the settlement agreement does not fulfill any of these standards, it will be rejected, and the parties will have to start all over again to address the judge’s concerns.

How Long Will It Take for Appeals to Be Heard?

When a party or a Class objector appeals a decision in a class action lawsuit, the final resolution of the case takes longer. When a party disagrees with a court’s ruling, they may file an appeal with a “higher” court, which can review and perhaps overturn the decision.

Though most appeals result in final rulings, depending on the court level in the initial judgement, an appeal might be heard in many courts.

While appeals may be made at any time after a court makes a decision, they are most often made in class action cases at certain points in the procedures, such as when a motion to dismiss or for summary judgment is granted, when class certification is granted, or after a trial verdict.

The “list of things you can sue for” is a long list that includes everything from personal injury to libel. Some of the items on the list are as follows: breach of contract, fraud, false imprisonment, and invasion of privacy.

What are the 3 stages of a lawsuit?

A: If you are referring to a legal case in which one party has filed suit against another, then the biggest payout would be if that person was able to win. However, there is no hard and fast rule for what constitutes as the most or least profitable lawsuit.

What is a large lawsuit called?

A: It is a legal action in which one party sues another for a large sum of money.