Invokana is a type of drug that treats diabetes. What are the side effects? How long will it take for Invokana to work? Is there any medication to replace this drug?

The “what are the dangers of invokana?” is a question that many people ask. This article discusses the side effects of Invokana and how it works. 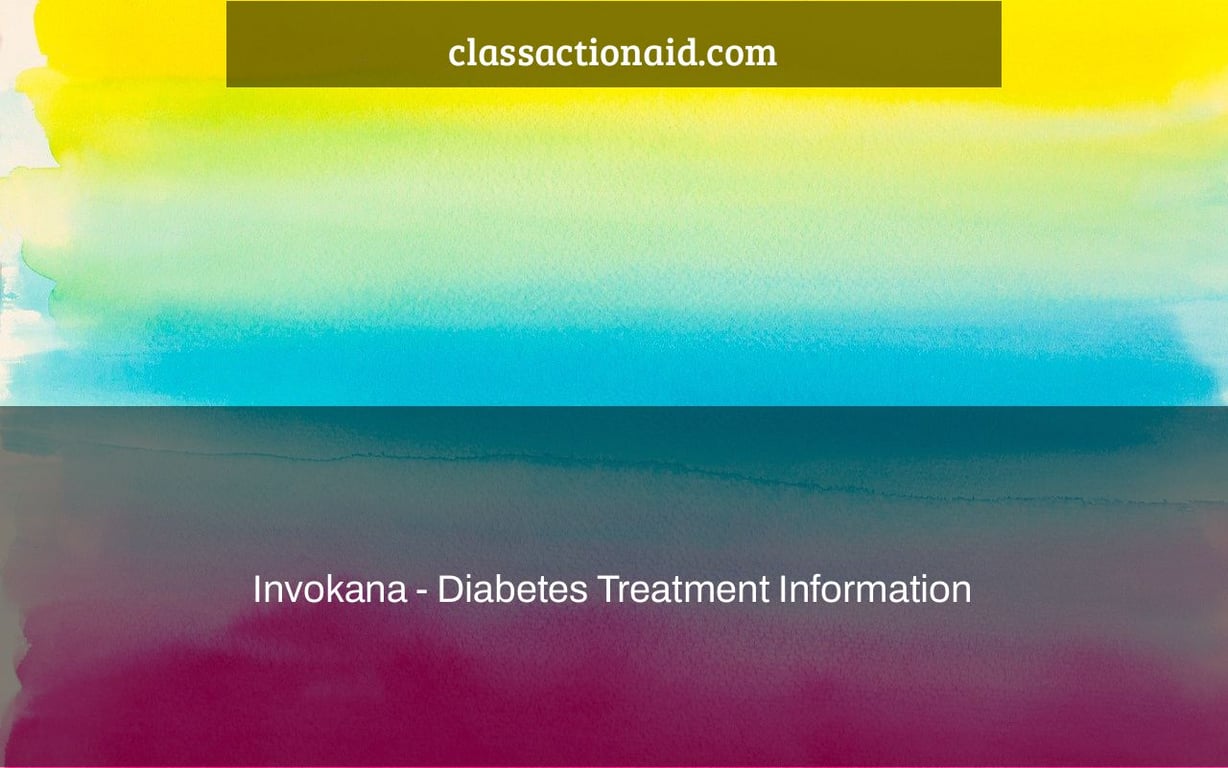 Invokana has the potential to induce major health problems, such as diabetic ketoacidosis (DKA) and renal failure.

During the medication approval process, several specialists questioned Invokana’s safety and advocated that it should not be approved. There were also concerns regarding the quality of the information utilized to approve Invokana. Despite the fact that Invokana was finally authorized, concerns regarding its safety and the safety of related medications remain.

Some patients have filed lawsuits against Johnson & Johnson and other drug companies, claiming they did not sufficiently warn about SGLT2 inhibitor side effects.

What Is Invokana and How Does It Work?

The body does not utilise insulin adequately in persons with type 2 diabetes. Insulin is a pancreatic hormone that controls blood glucose (sugar) levels by transporting sugar to cells for storage.

Invokana works by preventing glucose from being reabsorbed by the kidneys and increasing renal glucose excretion, reducing blood glucose levels.

When glucose builds up in the bloodstream rather than in the cells, it results in a hazardous loss in energy and eventually harms the body. SGLT2 is a naturally occurring protein in the body that aids in the retrieval of glucose from the bloodstream, preventing it from being lost in the urine.

This, on the other hand, is a terrible thing for diabetic individuals. Glucose must exit the diabetic’s body rather than being reabsorbed. Invokana and other SGLT2 inhibitors stop the SGLT2 protein from doing its job. They reduce blood glucose levels by preventing glucose from being reabsorbed by the kidneys and increasing renal glucose excretion (sugar excretion via urine).

Why was Invokana given a black box warning by the FDA?

Invokana’s elevated risk of foot and limb amputations prompted the FDA to issue a black box warning (the most serious warning it can issue) in May 2017. The warning was based on the findings of two clinical studies, which found that individuals with type 2 diabetes who used Invokana were twice as likely to need an amputation as those who took a placebo.

Amputations of the toe and foot were the most prevalent, according to the FDA, although leg amputations above and below the knee were also documented.

What Other SGLT2 Inhibitors Are There?

Invokana (canagliflozin; Janssen Pharmaceuticals/Johnson & Johnson), FDA-approved in 2013, was the first SGLT2 inhibitor to hit the U.S. market. It was followed by:

What Is Diabetic Ketoacidosis and How Does It Affect You?

Diabetic ketoacidosis (DKA) is a dangerous diabetic complication that develops when the body creates too many ketones in the blood. When cells do not get enough energy from glucose, they begin to break down fat for energy. The buildup of ketones in the blood causes it to become more acidic, which may damage the body. DKA may cause a patient to pass unconscious for an extended length of time (diabetic coma) and is potentially lethal. Frequently, hospitalization is necessary.

The FDA has identified Invokana and Invokamet as medications of concern.

The US Food and Drug Administration (FDA) issued a warning in May 2015 that Invokana and other SGLT2 inhibitors might cause DKA. The warning was based on 20 DKA cases submitted to the government during a one-year period. Given that DKA is most typically seen in individuals with type 1 diabetes, this is an exceptionally high number of occurrences. All of the patients needed to go to the ER or be admitted to the hospital.

In December 2015, the FDA released additional information, stating that SGLT2 inhibitors would now be required to include warnings concerning the risk of high blood acidity. The medications would also have to include warnings regarding dangerous urinary tract infections, according to the FDA. The following are some of the signs and symptoms of DKA:

What Are Some Other SGLT2 Inhibitor Health Risks?

DKA isn’t the only potentially dangerous side effect of SGLT2 inhibitors. In addition, the medicines have been associated to:

People with compromised kidney (renal) function should avoid SGLT2 inhibitors. Given that the medications affect on the kidneys and boost urine output, this isn’t unexpected. While kidney damage and impairment are listed in the prescription material for SGLT2 inhibitors, it’s possible that makers didn’t go far enough in warning about severe renal side effects when the medications were originally released. In a 2015 research, the Institute for Safe Medication Practices (ISMP) identified more than 450 Invokana side effects, including:

The ISMP questioned whether Invokana had been thoroughly evaluated and if the drug’s advantages outweighed its risks. “The available data are inadequate to address unsolved issues expressed in FDA evaluations concerning whether long-term usage would result in a continuous deterioration in kidney function,” the statement said.

In a June 2016 medication safety letter, the FDA said that Invokana, Invokamet, Farxiga, and Xigduo XR all need stronger kidney warnings. More than 100 incidents of acute renal damage, some requiring hospitalization, were reported to the FDA between March 2013 (when Invokana was authorized) and October 2015. Within a month of taking the medicine, almost half of the patients had evidence of renal impairment. The majority of them improved when they stopped using the medicine. The following are indications of acute kidney damage, according to the FDA:

Amputations of the legs and feet

Invokana’s elevated risk of foot and limb amputations prompted the FDA to issue a black box warning (the most serious warning it can issue) in May 2017. The warning was based on the findings of two clinical studies, which found that individuals with type 2 diabetes who used Invokana were twice as likely to need an amputation as those who took a placebo. Amputations of the toe and foot were the most prevalent, according to the FDA, although leg amputations above and below the knee were also documented.

Fractures of the bones

The FDA ordered a labeling change to Invokana in 2015 over the drug’s bone fracture risk. The new safety information is based on data that shows Invokana is more likely than a placebo to cause Fractures of the bones. The data comes from a post-marketing study that the FDA ordered Janssen to conduct upon Invokana’s approval.

Acute pancreatitis is an uncommon but possibly fatal adverse effect of Invokana, according to three case studies (inflammation of the pancreas).

A Journal of Basic and Clinical Pharmacy report details a 50-year-old man who was prescribed Invokana four days prior to being admitted to the hospital complaining of malaise, weakness, Pain in the abdomen, and vision loss. The patient stopped using Invokana and his symptoms subsided.

Another case study details a similar experience with a 33-year-old woman. The woman was admitted to the emergency room with nausea, vomiting, and severe Pain in the abdomen. She discontinued Invokana and, like the male patient, subsequently recovered.

The American Journal of Therapeutics has published a third instance of this kind. There are presently no pancreatitis warnings for Invokana.

The FDA noted that it could not rule out the potential that dapagliflozin causes to bladder and breast cancer based on existing evidence. These results hampered Farxiga’s approval, and although it was eventually authorized, the FDA mandated six post-marketing studies.

The FDA also warned that people with active or previous cases of bladder cancer should not use Farxiga. Similar Cancer Threats were not found for Invokana. Dapagliflozin is also an ingredient of Xigduo XR.

At the time of Invokana’s approval, there was debate regarding what seemed to be an increase in cardiovascular events (such as heart attacks and strokes) among clinical trial participants, with one research revealing that Invokana caused 13 CV events compared to only one in the placebo group.

Janssen makes around $1.5 billion a year from Invokana.

In a vote, 8 of the 15 panel members raised worry about data on CV risks (especially strokes), citing data inadequacy as a reason. Despite worries about cardiovascular disease, the FDA panel decided 10-to-5 to approve Invokana. The FDA required five post-marketing studies, including a cardiovascular outcomes study, as part of its clearance.

Meanwhile, hundreds of thousands of patients are given Invokana, which brings in around $1.5 billion every year for Janssen. Because diabetes increases the risk of heart attack, stroke, coronary artery disease, and other CV consequences, all new diabetes medicines licensed in the United States must be clinically examined for cardiovascular risk.

Invokana currently has no warnings about Effects on the cardiovascular system.

Invokana is a diabetes treatment that has been on the market for a while now. The drug is used to lower blood sugar levels and prevent complications from diabetes. It comes in two doses, 100mg and 200mg., with side effects of nausea, vomiting, diarrhea, headache, dizziness, or an upset stomach. Reference: invokana 100 mg.

What are the dangers of taking Invokana?

A: Invokana is a blood sugar medication that can cause heart problems. It also interacts with certain medications and other drugs, so its important to tell your doctor if youre currently taking any of these.

A: Invokana was taken off the market due to an FDA warning in October 2016. There were reports that patients on this medication developed severe kidney issues, including acute renal failure and liver damage.

Is Invokana a good drug for diabetes?

A: Unfortunately, there is not enough information about Invokana to know for sure.