With the recent settlement in Invega v. Teva, and a corresponding update to the Class Summary of Risperdal’s FDA label, it is clear that male breast development lawsuits will continue as this area of medicine becomes more and more complex.

The “risperdal lawsuit 2020” is a legal case that has been filed by the parents of children who were prescribed Risperdal. The lawsuit seeks compensation for the side effects suffered by their children, such as male breast growth and impotence. 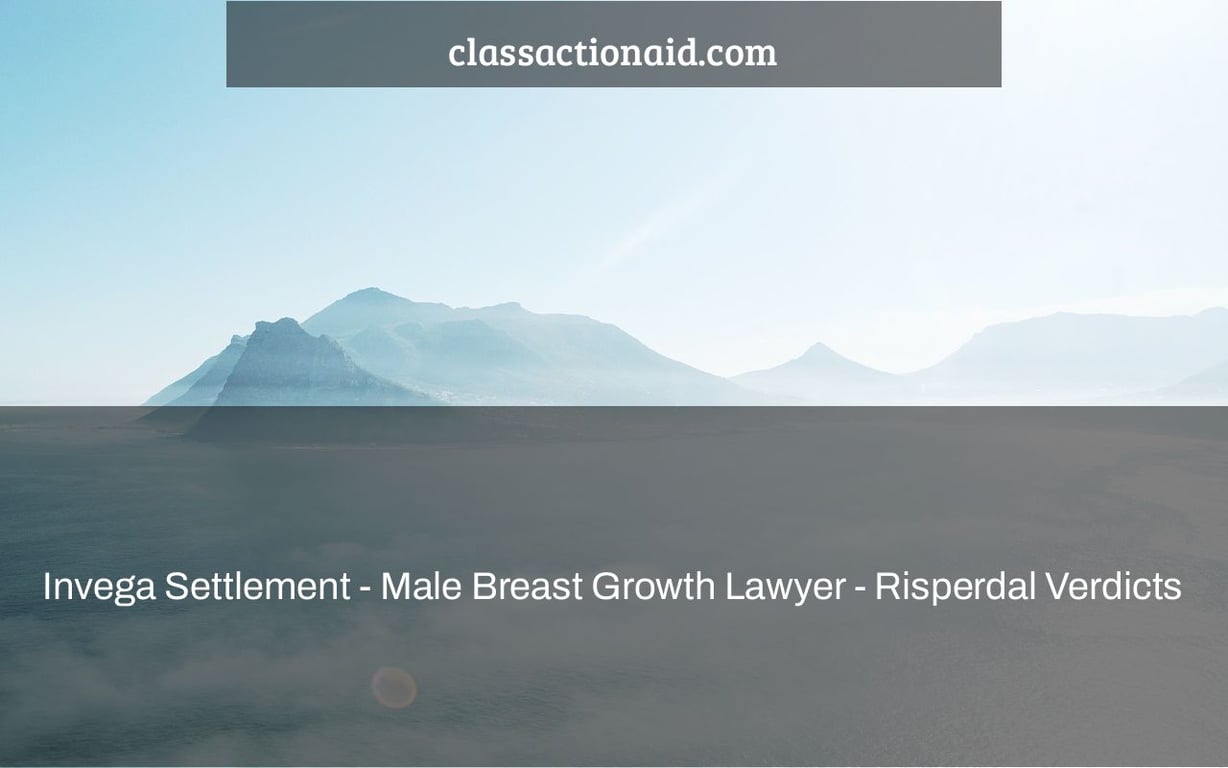 Johnson & Johnson has yet to settle its Invega lawsuits, so it’s impossible to say for sure what sort of relief plaintiffs might receive.

But Invega is almost chemically identical to its predecessor, Risperdal. That means Risperdal settlements establish a precedent that can give us a rough idea of what to expect from Invega settlements. (J&J developed Invega to replace Risperdal because the patent protection on Risperdal expired in 2003.)

Young males who acquire feminine breast tissue (gynecomastia) as a result of antipsychotic drugs like Invega may be eligible for millions of dollars, according to the following Risperdal settlements.

Aron Banks was prescribed Risperdal off-label at age nine: the drug caused him to grow breasts so large, they had to be surgically removed. He was the first Risperdal plaintiff whose case went to trial. After just one day in court, Johnson & Johnson saw the writing on the wall and settled Mr. Banks’ case for an undisclosed amount.

There were five more cases to follow Mr. Banks’, which were considered bellwethers. J&J reached undisclosed settlements for all five.

In January 2013, Johnson & Johnson reached undisclosed settlements with 77 more plaintiffs who had filed lawsuits over Risperdal side effects. Later that year, the plaintiffs filed a motion to enforce that settlement, claiming that J&J had not honored its terms and had no intention of doing so. (There have been no updates to this story for the past three and a half years.)

Austin Pledger, an autistic kid from Alabama, developed breasts after being administered Risperdal off-label in 2002. (Risperdal was not approved for use by children by the FDA until 2006.) Mr. Pledger’s friends teased him about his breasts, which developed to a size 46DD over time.

Mr. Pledger (now 22) filed a lawsuit against J&J to hold them accountable for their egregious concealment of Risperdal’s potential side effects. In February 2015, a Philadelphia jury sided with Mr. Pledger, awarding him $2.5 million in damages.

During the trial, former FDA chief David Kessler testified that J&J knew as early as 2001 that Risperdal could cause gynecomastia in as many as 5.5% of Risperdal users. But the company did not add a warning to the drug’s label until five years later, in 2006.

Nicholas Murray (now 22) was administered Risperdal off-label for autistic symptoms from 2003 to 2008. Mr. Pledger, like so many others, developed gynecomastia as a result of the medicine. Mr. Murray’s breasts persisted when he stopped using the medicine.

In November 2015, a Philadelphia jury ruled against J&J once again, this time in favor of Nicholas Murray. After just two hours of deliberations, they awarded Mr. Murray $1.75 million in damages.

In December 2015, yet another jury ruled against J&J. This time the plaintiff was a Wisconsin man named Timothy Strange who was prescribed Risperdal as an adolescent (in 2006) to treat symptoms of Tourette syndrome. The jury awarded Mr. Strange $500,000 for J&J’s failure to warn him of the sizable risks involved in taking Risperdal.

In July 2016, a Philadelphia jury awarded Andrew Yount a staggering $70 million, ruling not only that J&J had failed to warn Mr. Yount of the risks in taking Risperdal, but that the company had concealed or destroyed evidence related to the case.

Mr. Yount, a Tennessee resident, began taking Risperdal at the age of five. He, too, had gynecomastia.

Have You Been Affected by a Drug?

With approximately 350 lawyers and a support team of about 2,000, our business is one of the biggest personal injury companies in the nation. We have recovered $5 billion for 200,000 customers to date.

When pharmaceutical firms’ irresponsibility causes people damage, our lawyers fight to hold them responsible. Please contact us if you or a loved one has had serious adverse effects after taking a medicine. Don’t put it off; some instances are time-sensitive, and you might be eligible to compensation if you act quickly.

The “gynecomastia class action lawsuit” is a case that was filed by a group of men who were prescribed the drug Risperdal. The plaintiffs in this case are seeking damages for their breasts growing larger as a result of taking the medication.

A: The payout for this case is not readily available.

Is gynecomastia from Risperdal reversible?

A: Gynecomastia is the excess breast tissue that you may experience from some medications, such as risperidone. The condition is usually not reversible and requires mastectomy to reduce or eliminate it.

A: No, Risperdal does not make men grow breasts. This medication is usually prescribed for symptoms of schizophrenia and bipolar disorder, especially when the patient is having a manic episode or has psychosis from these conditions.