What happens when a worker likes his boss so much that he decides to become one? Well, this has happened with some independent contractors. While the contractor may have dreamed of an entrepreneurial work life on their terms, they are now beholden to their company for its benefits and protection. in recent years, more Americans than ever before find themselves falling into the category of “employee” as companies hire more employees who aren’t really employees at all. The workers typically believe it is better for them because by doing away with taxes and other responsibilities like healthcare or retirement plans, but few realize until it’s too late that there was no such thing as a free lunch after all

The “misclassified employees awarded $1.3 million” is a lawsuit that was filed by an independent contractor who claimed to have been misclassified as an employee. The company was ordered to pay the workers $1.3 million in back wages and damages. 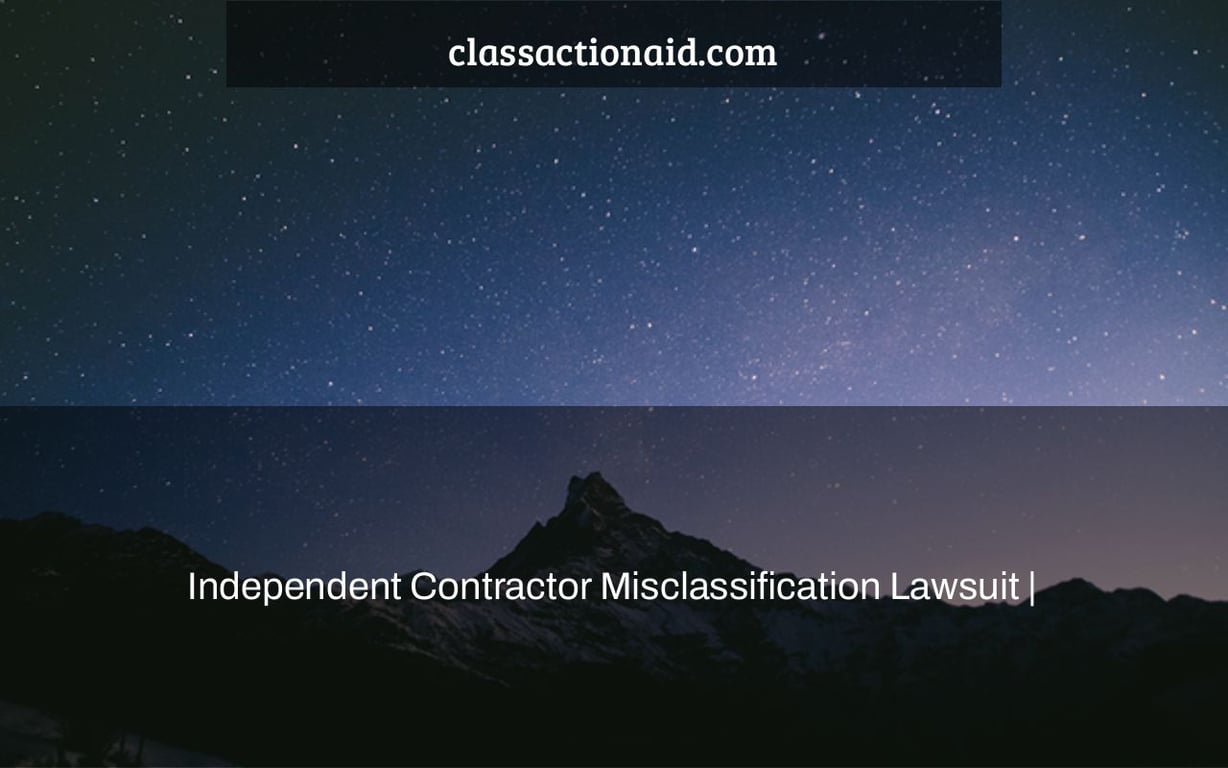 Employee misclassification as independent contractors is a key source of worry for the American labor and economy. Workers who are handled as contractors but should be categorized as employees may be able to sue their employer for back pay and other benefits by filing a lawsuit.

We’re investigating potential employment cases against businesses that misclassify their employees as independent contractors. Please contact us to learn more about your legal options and how a lawsuit might assist you.

Why Do Employers Misclassify Employees?

Employers misclassify workers as contractors for a simple reason: it saves them money.

The distinction between a contractor and an employee is often ambiguous.

Not all independent contractors are misclassified. Nor does receiving a 1099 taxpayer form from a company automatically mean that you are a freelance worker. The distinction between a contractor and an employee is often ambiguous. Even the U.S. Department of Labor (DOL) admits that legitimate contractors play an important role in the economy.

However, serious issues occur when firms purposefully misclassify workers in order to save money. Using independent contractors rather than workers saves money since you don’t have to pay for:

Employers gain from 1099 employees because they are not required to give them with company-sponsored health insurance and pension plans, paid time off, medical leave, food and rest breaks, cost reimbursement, and other employee benefits. Furthermore, contract workers are less legally liable than employees since they are exempt from employment rules against discrimination, harassment, whistleblower reprisal, and wrongful termination.

It’s easy to understand why many businesses opt to pay workers on a 1099 basis when you realize that independent contractors may save employers up to 30% on labor costs. However, in addition to being unlawful, the practice harms employees, deprives governments of tax income, and puts law-abiding businesses at a competitive disadvantage.

Industries with a High Rate of Misclassification

Misclassification of independent contractors happens in a broad spectrum of blue collar and white collar jobs. In the following industries, it is abnormally high:

Priority Enforcement at the National Level

Independent contractor misclassification, according to the Labor Department, is “one of the most critical challenges confronting employees, companies, and the whole economy.” In recent years, the issue has become more prevalent in American companies. According to national research, 10% to 30% of businesses may misclassify their personnel as independent contractors. According to some state surveys, the number of misclassified employees might be as high as 30 to 40%.

The proportion of employees that are misclassified might be as high as 30% to 40%.

To fight worker misclassification and collect back wages and unpaid taxes, the Department of Labor has cooperated with the Internal Revenue Service (IRS) and state workforce agencies. The agency has recovered billions of dollars for millions of employees in the restaurant, hotel, construction, janitorial, agricultural, retail, and manufacturing sectors, where it concentrates its enforcement operations.

Government authorities aren’t the only ones attempting to hold companies responsible for misclassifying workers as independent contractors. Workers’ misclassification cases are also on the increase.

These cases, like government enforcement efforts, aim to recoup funds for employees who have been denied fair pay due to misclassification. Importantly, they enable employees to take proactive measures to address workplace infractions rather than waiting for the government to intervene.

There are two sorts of worker misclassification cases that may be filed:

Providing Evidence for Your Claim

The boundary between the two worker categories is sometimes fuzzy, which is one of the reasons businesses may get away with misclassifying workers as freelancers.

There is no one criteria for determining whether a worker is an employee of a firm or a sole proprietor. To identify the nature of a working relationship, several government agencies have established multi-factor “tests.” The focus of these tests is on how much influence an employer has over a worker.

Courts also consider the extent of influence a company has over a worker in worker misclassification cases. The Court may assess who controls which of the following:

Other characteristics that may be used to establish whether or not a person is a worker include:

Again, no one element determines the outcome. To determine economic reliance or independence, the Court analyzes (or should consider) all circumstances in each instance.

Eligibility for a Misclassification Lawsuit

Your (claimed) employer must treat you as a contract worker even though the nature of your job qualifies you as an employee in order to be qualified for an independent contractor misclassification case.

Check the tax form your employer sent you to see whether you are currently classed as an independent contractor. You are classified as a contract worker if you get an IRS Form 1099. Employees complete a W-2 form.

Compensation for Workers Who Have Been Misclassified

The most common lawsuit Compensation for Workers Who Have Been Misclassified is back wages in the form of unpaid overtime and minimum wage. Under the Fair Labor Standard Act (FLSA), plaintiffs can seek liquidated damages and recover up to double what is owed to them.

The most common Compensation for Workers Who Have Been Misclassified is back wages—unpaid overtime and minimum wage.

You may be able to bring a lawsuit for lost pay and other benefits if your employer tries to save money by misclassifying you as an independent contractor. Because these claims normally have a two-year time restriction, it’s critical to speak with an employment lawyer as soon as possible to evaluate your options.

To learn more, contact us for a free, no-obligation consultation.

A: Possibly, but it is not something that can be done effectively by a contractor.

How much can I sue for misclassification?

A: This is a legal question, and as such I cannot answer. Please consult an attorney for your specific situation.

What to do if you are misclassified as an independent contractor?