Myriam Douo is a member of Friends of the Earth and an activist working to protect biodiversity, which she believes is threatened by Monsanto’s practices. 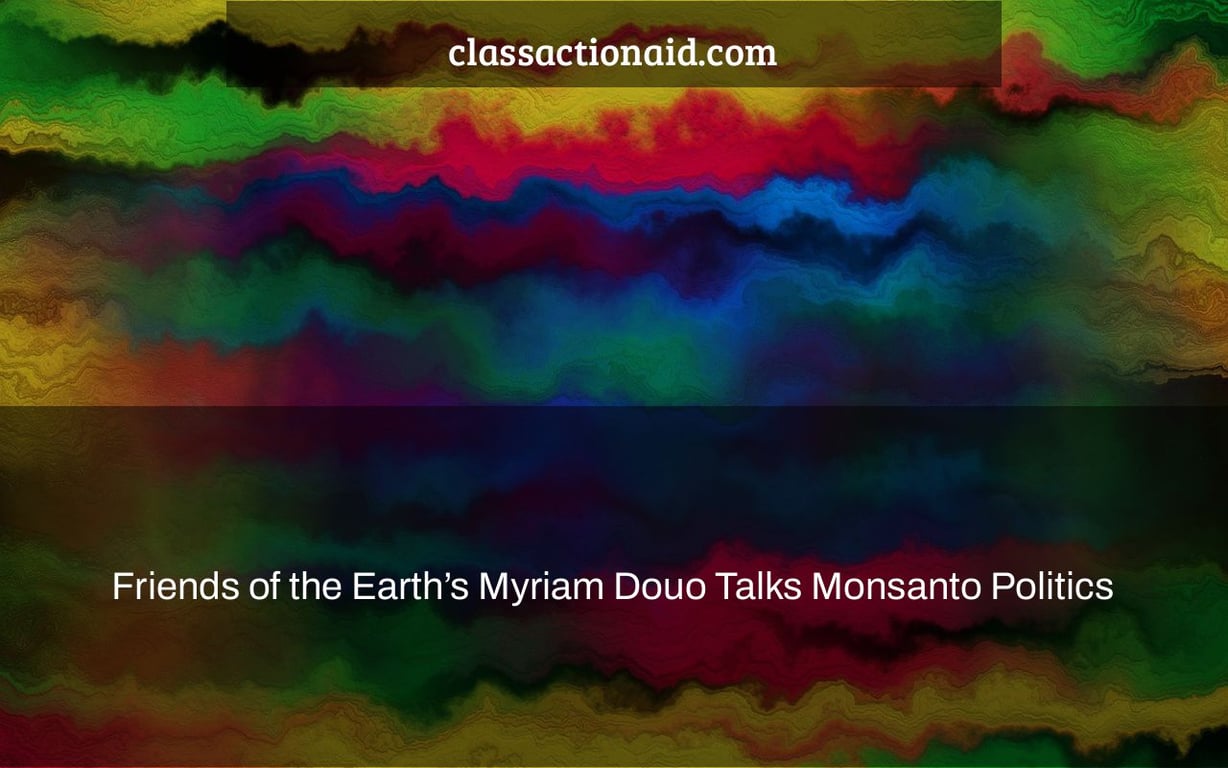 “When you convert a scientifically proven public health concern into a political issue, the implications are going to be enormous.”

Monsanto is at a crossroads, facing legal and political disputes over the safety of its flagship herbicide, Roundup.

In the United States, lawsuits claim that glyphosate (the main ingredient in Roundup) causes cancer. Monsanto allegedly persuaded the EPA to deem the chemical safe, according to documents recently released.

While the EPA’s claims that glyphosate is safe seem to be eroding by the day, the European Union is about to vote on glyphosate’s renewal. Monsanto’s techniques are virtually the same regardless of which side of the Atlantic it is on in its attempt to persuade political decision-makers that the world’s most widely used herbicide is safe.

To further understand how Monsanto has turned a public health concern into a political game, we talked with Douo, Myriam, a lobby transparency advocate and corporate capture specialist with Friends of the Earth Europe. Monsanto’s impact over the world’s food supply might grow even more if its planned merger with Bayer is allowed, as Ms. Douo points out.

(For clarity, this dialogue has been trimmed and reduced.)

Monsanto says that glyphosate is safe since it has been authorized by organizations such as the US Environmental Protection Agency. What would you say in response to that? 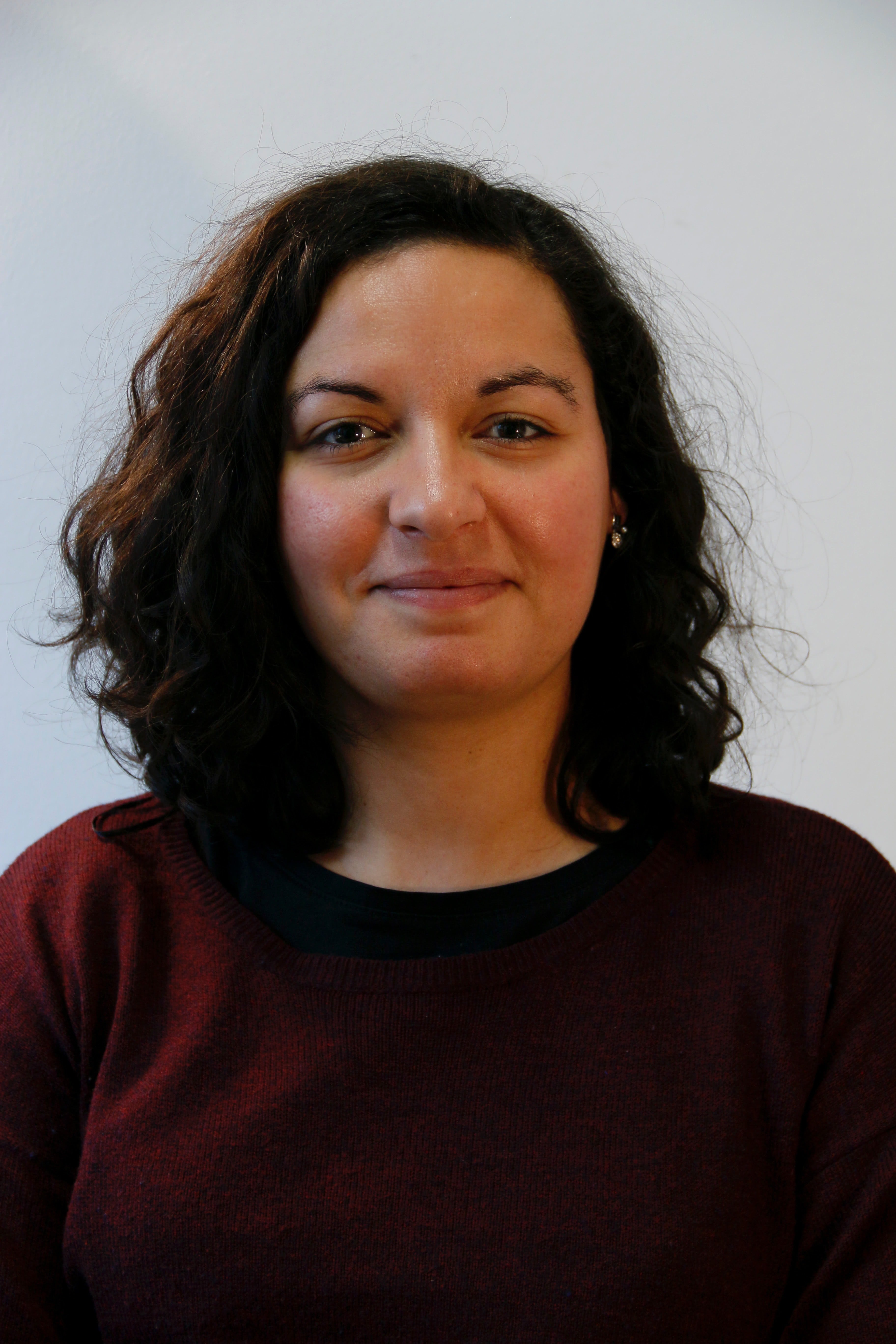 The scientific data is in front of you. The World Health Organization (WHO) has stated that glyphosate is a likely cause of cancer in humans, which we believe is sufficient reason to prohibit its usage. Monsanto’s goal has been to undermine such scientific findings by claiming that they are rubbish research.

In general, research is quite expensive. As a result, finding trustworthy, credible, and independent research on glyphosate is very difficult. A lot of the study has been funded by Monsanto.

Agency risk evaluations, for example, are based on documentation given by Monsanto. Companies usually give the evidence, and authorities use it to do an effect evaluation.

However, we have no idea what’s in those docs. Despite Freedom of Information Act requests, they are not accessible to the public or are only partly available. The European Green Party has now declared that they will take the European Food and Safety Authority to court for the lack of openness surrounding the glyphosate review.

In comparison to these organizations that depend on Monsanto’s knowledge and resources, Monsanto is a large corporation with a lot of resources. In actuality, the agencies are unlikely to have gone over all of the information as thoroughly as they should have.

Friends of the Earth Europe has been particularly vociferous in its opposition to the planned combination of Bayer and Monsanto. Why should the general public be concerned?

It’s a merger of two agricultural behemoths with monopolies in their respective areas. Monsanto focuses on genetically engineered seeds, whereas Bayer specializes in insecticides. Each of them has a significant market share, and if they unite, they would have a tremendous monopoly on food, which is something that we all need.

It’s particularly problematic when it comes to Monsanto’s proprietary seeds. The patents limit farmers from recycling seeds from year to year, and Monsanto pursues farmers in the United States vigorously for suspected patent infringements. It essentially entices farmers to keep purchasing Monsanto seeds.

What we argue for is a system of food sovereignty, in which everyone has the choice to choose what they want to eat without GMOs, pesticides, or anything else that is damaging to people, the environment, or our health. Essentially, these mergers are the polar opposite of that.

What are the chances that these huge agribusinesses will gain political clout as a result of their mergers?

Michael Taylor was in charge of regulating genetically modified crops, or the lack thereof, while also working closely with Monsanto.

In terms of political and business ramifications, you already have these gigantic behemoths who will gain even more influence.

If you look into the revolving door problem just a little bit, there’s a really revealing instance with Michael Taylor in the United States. He began his career with the USDA, then moved on to Monsanto as a lawyer, then returned to the USDA and the FDA, then back to Monsanto, and finally to President Obama’s appointment as a senior advisor to the FDA. I’m still trying to figure out where he went a few months ago, but I can tell you it’s not good!

Taylor was in charge of regulating genetically engineered crops, or the lack thereof, while maintaining strong ties to Monsanto. That is really concerning in terms of corporate capture—companies’ impact on our decision-making processes and democracies—and it has to be raised loudly.

The European Commission was petitioned by more than 200 groups from all around the globe to oppose these mergers. Dow Chemicals and DuPont, as well as Syngenta and ChemChina, have unfortunately been approved.

The combination between Bayer and Monsanto has yet to be authorized. We’re attempting to halt the process and stop the merger from taking place. We’re campaigning alongside other organisations and NGOs all throughout Europe and the world.

Monsanto has a poor reputation, which is on our side. Fortunately, they didn’t do so well in terms of public relations. They’re well-known. Everyone is aware of their activities. They are disliked by many people, and deservedly so. So, perhaps, it will be enough to bring this process to a halt.

Despite the fact that Monsanto and Bayer have agreed to sell $2.5 billion in assets, it seems that they do not have the public’s best interests at heart.

When corporations manage to prioritize their own personal interests above the interests of the whole world’s population, corporate capture is usually a problem that has to be addressed.

We can’t allow these corporations any more authority than they currently have. If we ever want to reform our food system, we must first move in the other way.

Monsanto and Bayer spend millions on lobbying each year, but as you pointed out, we have no idea how much they spend. What exactly is the issue here?

Lobbying expenditure is critical since it is how we assess an actor’s firepower or impact.

In the European Union, like in the United States, there is a register where all lobbyists must reveal how much they spend on direct and indirect lobbying each year. If you hire a public relations agency to develop a communication campaign for you, or a legal firm to advise you on the redaction of certain bill modifications, or if you belong to any trade groups that will lobby on your behalf, it should be included as lobbying power.

The lobby register is legally binding in the United States, so if you don’t submit your information correctly, you might face a fine.

We know the data isn’t reliable, but there’s no way of knowing how much they spend.

We have a volunteer lobby registry throughout Europe. The main consequence of not registering is that you will not be able to meet the European Commission’s highest officials—presidents, commissioners, director generals, and their staffs. That’s barely around 1% of the commission’s total budget. And we all know that you want to speak to the individuals who are developing the law, not the political decision-makers who will just rubber stamp it.

Because the lobby register is not a legally enforceable document, all of the information disclosed in it is suspect. You may compare the statistics from the United States and Europe at OpenSecrets.org and LobbyFacts.eu, respectively.

For example, Bayer recorded $7.7 million in lobbying expenditures in the United States in 2015, compared to $1 million in the European Union for a similar market. We know the data isn’t reliable, but there’s no way of knowing how much they spend.

What impact does this lack of openness have on consumers? 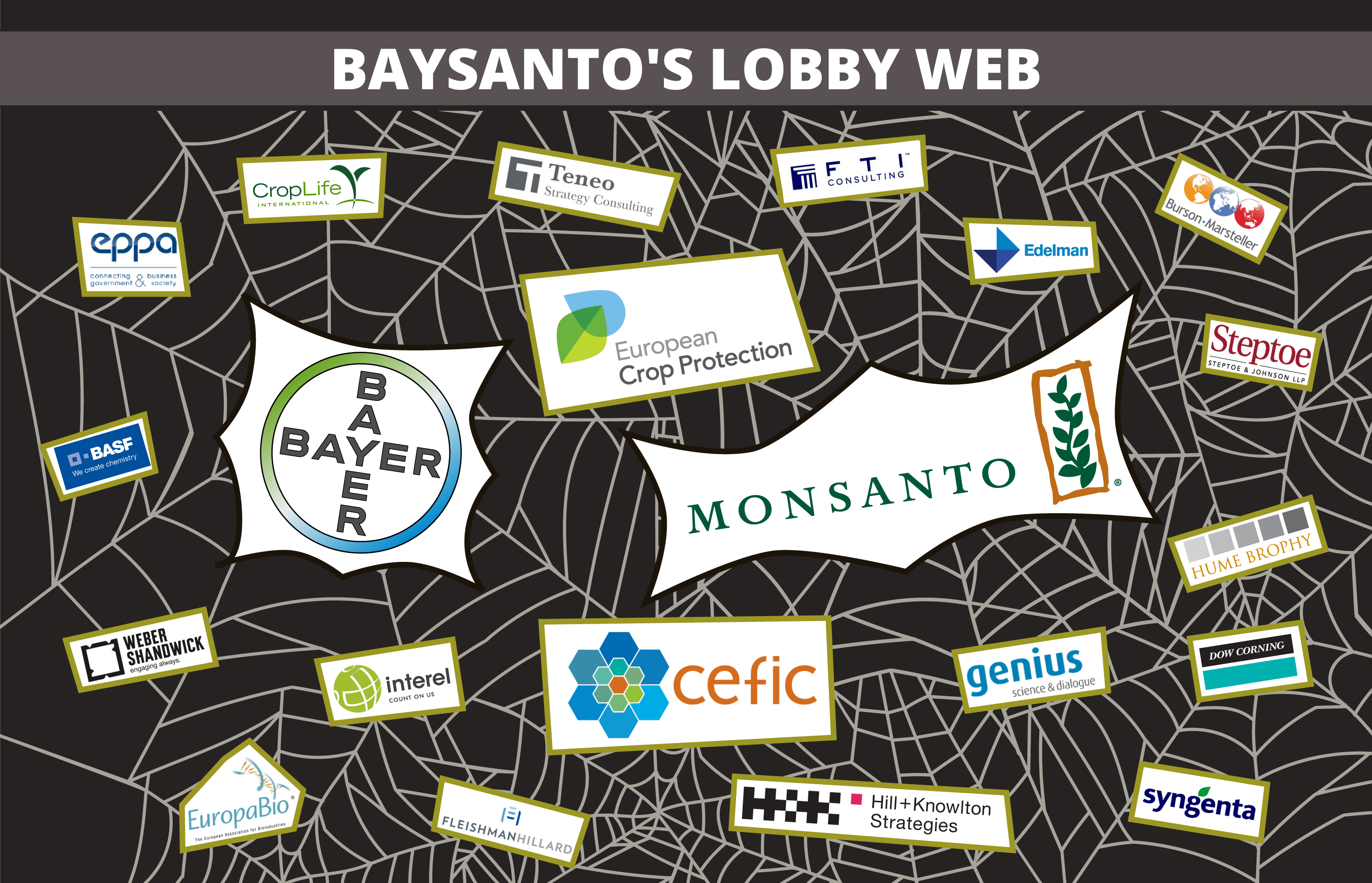 Friends of the Earth Europe is the source of this image.

Everything is so muddled, and it’s difficult for individuals to comprehend or disentangle the complex web of relationships that these businesses have.

In the end, it’s a matter of public health. And the ramifications will be enormous if you transform a public health problem with scientific data into a political one.

Monsanto, for example, established a glyphosate task group in August 2016 with the primary purpose of renewing glyphosate registration in the European Union. Obviously, it’s a lobbying organization, but it’s portrayed as a trade association with members and everything.

Monsanto has also attempted to manipulate farmers and the agriculture industry. “How will our farmers live and develop their crops if we prohibit glyphosate?” they like to question. This is their tactic of portraying themselves as “feeding the globe,” which isn’t quite accurate. Small, non-industrial farmers produce more food on less land than industrial farmers.

It’s understandable that they’d support glyphosate since it’s their bread and butter. Farmers use glyphosate to destroy weeds, and Monsanto manufactured genetically altered seeds that are immune to it. If it’s outlawed, a whole slew of their goods will be rendered obsolete, and they’ll have to start all over again.

However, there is widespread popular support for it. The European Commission has been asked to prohibit glyphosate, according to a European Citizens Initiative. So far, 1.5 million signatures have been collected.

There is an awareness. People are aware of what it is, which is amazing considering the technical nature of the subject and the fact that it is a relatively unknown molecule.