The energy drink industry is valued at over $70 billion in the US alone. Evidence suggests that some companies may be misleading consumers with claims of improvement and “dramatic effects,” while others have been accused of using stimulants like caffeine to mask side effects or avoid liability.

The “side effects of energy drinks” is a topic that has been in the news recently. Energy drinks have been linked to side effects such as heart palpitations, seizures, and even death. There are many lawsuits against energy drink companies for these side effects. 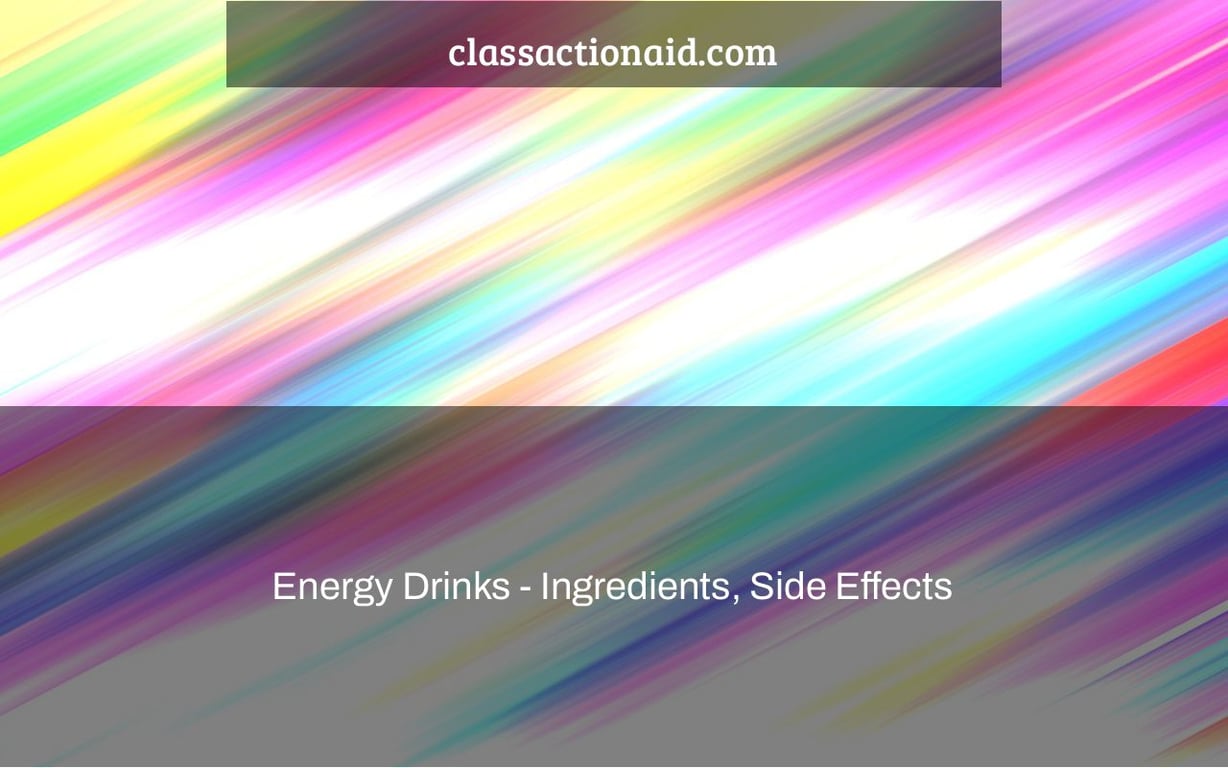 Energy drinks, such as Red Bull, Monster, and Rockstar, are highly caffeinated beverages. (5-hour Energy is a smaller, more concentrated version of the same kind of energy mix.) They include high doses of sugar in addition to caffeine, which is one of the reasons energy drinks are so harmful.

The mix of relatively obscure compounds like taurine, ginseng, guarana (which has two to five times the caffeine of a coffee bean), L-carnitine, and inositol is also concerning. Though any of these chemicals may be safe when used alone, there is little to no research on their effects at big quantities, over time, or when combined.

Companies that advertise energy drinks to children and teenagers are also becoming an increasing danger. They advertise significantly on youth-oriented networks such as MTV and Adult Swim, have robust social media presences, and often sponsor extreme athletic events that attract a youthful audience. This isn’t by chance. The energy drink business has borrowed a leaf from Big Tobacco’s marketing playbook and is attempting to create lifelong customers for its harmful goods.

Worse, energy drinks are not even regulated by the FDA in the same way that sodas are, which have a caffeine limit that most energy drinks surpass. They’re available in vending machines at schools and during athletic events. Despite scores of fatalities, a mound of troubling evidence, and cries for tougher regulation, the energy drink business has mostly remained unaffected.

An Overview of Energy Drinks

The energy drink market is still relatively new, with Red Bull, the industry’s standard-bearer, bursting onto the scene in 1987 with the promise of giving customers wings.

The popularity of Red Bull in the early 2000s spawned brands like Rockstar (2001) and Monster (2002, released by Hansen’s Natural). These businesses followed the Red Bull model of marketing a lifestyle as well as supporting extreme sports athletes and events. 5-hour Energy debuted in 2009, with a two-ounce injection containing a highly concentrated dosage of caffeine and B vitamins.

Initially, all of these firms branded their goods as nutritional supplements rather than drinks, enabling them to avoid FDA regulations. However, between 2011 and 2013, a string of fatalities linked to energy drinks, including Anais Fournier, Alex Morris, and Cory Terry, drew attention to the product. Monster Energy and others classed as beverages in 2013 in response to rising public outcry.

Several wrongful death and false advertising cases were also filed against these corporations, the most of which were resolved out of court.

Energy drinks have been connected to 34 fatalities, according to the Center for Science in the Public Interest (CSPI), and accumulating data reveals that they boost blood pressure and stress hormones and may cause arrhythmias. They aren’t safe for a wide range of individuals, including children and adolescents, diabetics, those with heart issues or seizure disorders, and people on medication, according to the study.

Despite all of the negative data, lawsuits, and debate, energy drink sales have never been greater. They reached a global high of $50 billion in 2015, and are predicted to reach $60 billion by 2021.

To begin with, energy drinks include caffeine: a lot of it, and it comes from a variety of sources (which studies suggest is more dangerous than single-source caffeine).

In a 2012 Consumer Reports story titled “The buzz on energy-drink caffeine,” it was discovered that many energy drinks under-report caffeine content by as much as 20%. A single drink may contain up to 242 mg of caffeine, which is almost three times as much as a cup of coffee. There are 422 mg in a two-ounce 10-Hour Energy Shot. These figures don’t even take into consideration the beverages’ high sugar content or additional stimulants like guarana (more on this below).

Because dietary information is only necessary for nutrients, while caffeine is a “natural chemical,” the FDA does not compel energy drink producers (or anybody else) to report how much caffeine is in their products. This makes it lawful for energy drinks to hide or undersell their caffeine level.

Artificial sweeteners are included in 69% of energy drinks, but since more than half of these beverages are not labeled “diet,” the presence of these sweeteners is not required to be disclosed to consumers.

As if that weren’t terrible enough, energy drinks also include a shocking quantity of sodium—three to four times more than regular cola. Monster has 180 milligrams in a 16-ounce can, which is nine times the average.

Finally, energy drinks often include an alarming combination of taurine, guarana, ginseng, L-carnitine, and inositol, as well as a potpourri of B vitamins and other supplements. Surprisingly little study has been done on the benefits of these substances in combination, or on their long-term negative effects.

“Energy Drinks Promise Edge, but Experts Say Proof Is Scant,” a 2013 New York Times study concluded, “the energy drink market is predicated on a mix of substances that… have little, if any, value for consumers.”

Concerns about safety are growing.

These beverages have the potential to be fatal. Since 2004, the Center for Science in the Public Interest (CSPI) has connected 34 fatalities to energy drinks, half of which have happened in the last three years. There were 22 fatalities with 5-hour Energy, 11 deaths involving Monster, and one fatality involving Rockstar.

The findings are similar to those of an American Heart Association research published in November 2015, which revealed that consuming a single 16-ounce energy drink boosts blood pressure and doubles stress chemicals in young, healthy people.

Doctors and legislators call for more regulation, yet no action is taken.

The 200,000-strong American Medical Association (AMA) voted to endorse a ban on the marketing of energy drinks to adolescents at its 2013 convention in Chicago, citing possible cardiac issues and other negative side effects.

“How many deaths will it take to get the FDA to protect consumers from energy drinks, with their high levels of caffeine and untested herbal and chemical ingredients?” the Center for Science in the Public Interest (CSPI) asked in 2014, linking 34 deaths to energy drinks and pleading for more FDA regulation.

Morgan & Morgan filed a White House petition in 2016 advocating for stronger regulation of the energy drink industry’s marketing and sales practices to minors. The petition gathered approximately 3,000 signatures in a short period of time.

The FDA has adopted precisely zero regulations in response to all of the above.

In 2013, Canada banned the caffeine amounts permitted in single-serving drinks at 180 mg in response to a string of energy drink-related fatalities and other serious occurrences. It did so by requiring 28 firms, including Monster, Red Bull, Rockstar, and 5-hour Energy, to categorize their goods as food. (Previously, they were classified as “natural health goods.”)

Lithuania became the first EU nation to prohibit the sale of energy drinks to minors in May 2014. Latvia followed suit in January 2016, implementing a similar legislation that would take effect in June.

India outlawed energy drinks with caffeine and ginseng, including Monster Energy, in 2015, calling the combination “irrational and unlawful.”

Recently, Middlebury College in the United States prohibited the sale of energy drinks on campus, citing health risks and ties to behavioral behaviors.

Have You Been a Victim of False Advertising?

If you or a loved one has been harmed by a product, please call us right away for a free case evaluation. It’s possible that you’re entitled to compensation.

What are the harmful ingredients in energy drink?

A: The ingredients in energy drinks are not regulated by the FDA and may contain alcohol, caffeine, artificial flavors or colors.

What are the effects of energy drinks on the body?

A: Energy drinks can cause short-term effects such as headaches, nausea and insomnia. Long-term side effects could include a weakened immune system that makes it easier to contract illnesses or diseases like hepatitis C.

What are the long term side effects of energy drinks?

A: Drinking too much energy drinks can lead to anxiety, seizures and even heart attacks.