Documents released in a lawsuit filed by the Organic Consumers Association (OCA) allege that Monsanto tried to influence the Environmental Protection Agency’s assessment of glyphosate, which is partially made from corn. The documents also allegedly show how they influenced scientists who were conducting research on glyphosate.
The EPA found no significant link between cancer and exposure to Roundup among both agricultural workers and consumers.

The “monsanto legal cases” is a court document filed by the United States Department of Justice that alleges Monsanto influenced the EPA. 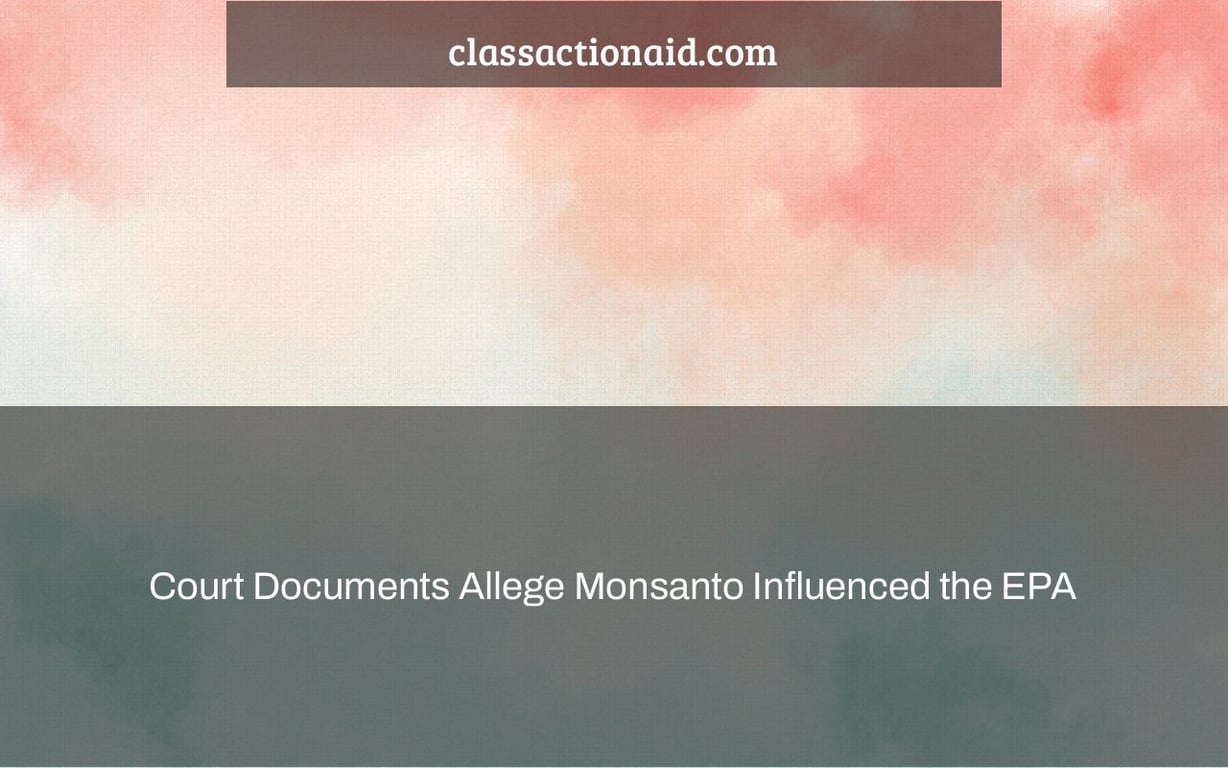 While Monsanto has never had a good image, fresh court records reveal exactly how far the firm is willing to go to retain its global pesticide dominance—possibly to the point of manipulating the regulatory bodies in the United States.

The EPA and Monsanto exchanged communication this week, revealing a cordial connection at a key moment when Monsanto’s herbicide Roundup was being evaluated as a suspected carcinogen. In the end, the Environmental Protection Agency found that glyphosate (Roundup) was not a carcinogen, sparking suspicions that Monsanto influenced the research.

The confidential papers were made public as part of the ongoing multidistrict lawsuit (MDL) between Monsanto and plaintiffs who claim Roundup caused their non-lymphoma. Hodgkin’s

The “Natural Flow of Information” between the EPA and Monsanto

“I should win a medal if I can do this.”

The hundreds of pages of emails and papers exchanged between the EPA and Monsanto reveal a shady connection that may have rested on the assistance of Jess Rowland, the EPA’s former pesticide division manager.

Rowland reportedly discussed attempting to block the Agency for Toxic Substances and Disease Registry’s glyphosate evaluation in a phone discussion with Monsanto regulatory relations manager. Rowland said in an email, “If I can kill this, I should earn a medal.”

Though such remarks raise worries about potential study bias (at best), this was a “natural flow of information,” not manipulation, according to Scott Partridge, Monsanto’s vice president of global strategy. However, this “natural flow of knowledge” may have extended to the glyphosate report written by the EPA. To save expenses, the papers incorporate allusions to ghostwriter portions.

Partridge proposed that the EPA utilize specialists for the study’s contentious portions, and that Monsanto “ghost-write the Exposure [toxicity] and [genotoxicity] sections” in an email.

Though Monsanto has denied ghostwriting, the importance of what Partridge gave the EPA should not be overlooked. The sections on exposure and genotoxicity discuss how humans are exposed to glyphosate and whether or whether it destroys the genes of cells, which may lead to cancer. Monsanto gained enormously if they did have a role in crafting these portions.

Rowland is accused of intimidating employees by a former EPA scientist.

“For once, do the right thing and don’t make choices based on how your bonus will be affected.”

Monsanto’s influence seems to have spread beyond Rowland to the whole study team, according to EPA scientists’ correspondence.

Rowland and another EPA employee, according to former EPA toxicologist Marion Copley, intimidated the glyphosate assessment panel. In a letter to Rowland, Copley claimed that “you and Anna Lowit bullied personnel on CARC [Cancer Assessment Review Committee]…to favor industry.”

She cites a number of reasons why glyphosate should have been classified as a carcinogen in her letter, including:

After listing the facts, Copley urges Rowland to put scientific integrity above money: “For once, do the right thing and don’t make choices based on how your bonus will be affected.”

A FIFA panel has found flaws in the Environmental Protection Agency’s report.

“Overall, the Panel found that the EPA’s assessment did not seem to meet the EPA Cancer Guidelines.”

The integrity of the glyphosate review has also been questioned by scientists outside of the EPA.

In December 2016, a team of scientists from the Federal Insecticide, Fungicide, and Rodenticide Administration met to discuss the findings. The panel was split: half of the scientists thought the study and findings were flawed, while the other half supported the EPA.

“Overall, the Panel decided that the EPA review does not seem to meet the EPA (2005) Cancer Guidelines,” the FIFA panel writes in a study issued last week.

They were concerned about the lack of data and evaluation of individuals at increased risk of lymphatic cancer, such as those who produce, market, or directly handle glyphosate.

Members of the panel considered that the EPA’s finding that glyphosate is “not likely to be carcinogenic to humans” should be revised to “suggestive evidence of carcinogenic potential” because of these concerns.

This comes after Zen Honeycutt, the founder of Moms Across America, discovered that the EPA is finally doing a full study of glyphosate formulations. Previously, they simply looked at the active ingredient, which may have varying results depending on the rest of the recipe.

In an article for The Hill, Honeycutt believes that evaluating “just one chemical in a chemical product is a flawed approach,” since “even third-grade chemistry reveals that when one chemical is added to another chemical, the results are radically different.”

Monsanto has already lost a major glyphosate case in California, which now has the authority to classify glyphosate as a carcinogen.

The decision was based on a research from the International Agency for Research on Cancer (IARC), which classified glyphosate as a “probable carcinogen.” Monsanto retaliated by collaborating with the American Chemistry Council to defund and delegitimize the IARC.

“This is similar of the techniques adopted by Big Tobacco to sow doubt about scientific results,” IARC told ClassAction.com.

Monsanto is slowly realizing that money can’t buy you everything as more scientists speak up to protect their studies.

If you or a loved one has been diagnosed with cancer as a result of using Roundup, please contact us to find out more about your legal options. Our legal team is fighting to hold Monsanto responsible.

The “monsanto ghostwriting” is a court document that alleges Monsanto influenced the EPA. The company has denied the allegations.