The FDA has been criticized for overstepping its bounds in the past, but with a new law regulating e-cigarettes it might be that they have actually helped prevent teens from turning to smoking. The question remains whether or not this is enough of an incentive to curtail teen vaping and turn back the rising tide of youth smokers.,

The FDA’s decision to regulate e-cigarettes was a smart move, as the agency has said that these products are not safe enough for children or adults. Here are 3 reasons why the FDA was right to do so. 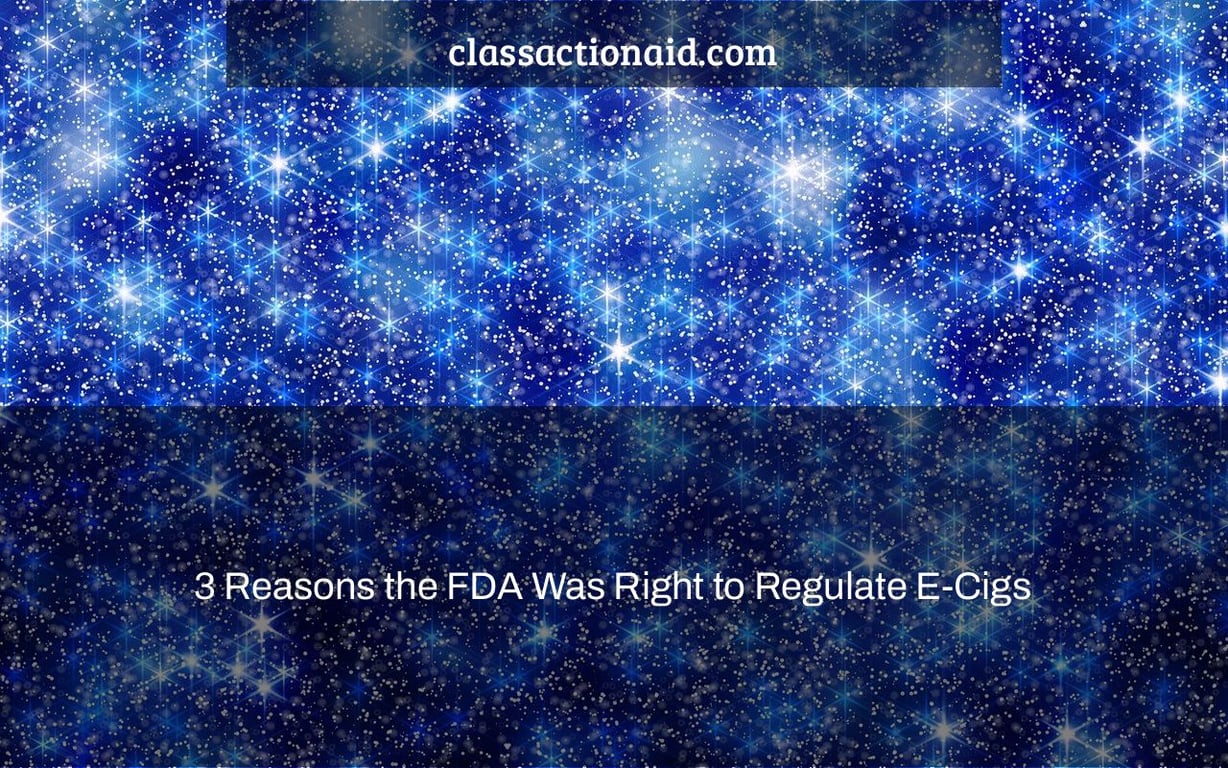 The US Food and Drug Administration (FDA) has proposed broad e-cigarette industry restrictions, which are slated to take effect on August 8. In the public health community, the new measures have been praised, but they have been criticized in other quarters. Here are three reasons why the FDA made the correct decision with these restrictions.

(1) In the United States, adolescent vaping is a public health concern.

The new legislation has the greatest immediate and long-term effect on the sale of e-cigarettes to minors, which is a good thing. Vaping soared by 900 percent among high school students from 2011 to 2015. The number of middle and high school students who vape quadrupled between 2013 and 2014.

“Many youngsters who would never have smoked cigarettes are now ‘vaping’ using flavored e-cigarettes, according to a recent research, resulting in a new generation utilizing nicotine at rates not seen since the 1990s.”

The New York Times reported on this.

E-cigarette businesses target children and teenagers in their marketing with lethal effectiveness, with flavors like Bubble Gum, Cotton Candy, Cupcake, and Goblin Goo (among many more).

As a result, millions of middle and high school students are becoming addicted to nicotine, with the majority of them also smoking regular cigarettes (or will). This is in sharp contrast to Europe, where child vaping is considerably less widespread, making e-cigarettes less of a concern overall, as observed by FDA tobacco czar Mitch Zeller.

At best, research claiming that prohibiting the sale of e-cigarettes to minors would raise the prevalence of conventional smoking within this group is deceptive. (One of the most ardent opponents of the proposed ban, Jonathan H. Adler, isn’t entirely neutral on the subject: e-cigarette maker NJOY has supported his previous study.) The great majority of health professionals think that a clear and significant decrease in vaping among children exceeds a possible 0.9 percent rise in conventional smoking.

It is critical to keep e-cigarettes out of the hands of minors. The FDA deserves credit for finally acting on this fast worsening public health catastrophe.

(2) The frequency with which e-cigarette batteries burst is disturbing.

If the recent spate of horrible e-cigarette explosions has taught us anything, it’s that their batteries are in desperate need of tighter regulation.

Lithium-ion batteries, the same kind seen in hoverboards that explode, are used in e-cigarettes. Between 2009 and 2014, there were at least 25 e-cigarette explosions, at least a dozen more in 2015, and three already in 2016. There have been 168 explosions so far, according to eCig One. These figures will only climb as the use of e-cigarettes grows and more individuals come forward.

While waiting in line at a Shell gas station in February, an e-cigarette exploded in a Kentucky man’s pocket. With second-degree burns, the guy was transported to the hospital.

A 14-year-old boy was blinded and an Orange County man lost his left eye only last month. These explosions are becoming a weekly occurrence, with 101 of the 168 documented cases resulting in physical harm or death, according to eCig One. (Many of these also lead to e-cigarette litigation.)

While some have complained that the FDA has gone too far, Joe Cavins, who lost an eye to an e-cigarette explosion, believes the new laws are insufficient.

Cavins told NBC Los Angeles, “If I would have had it in my hand or up in my mouth when it went off – I mean my God.” “I’m glad it didn’t become any worse.”

One of the most prevalent responses to the FDA’s decision has been that the government has simply given Big Tobacco the vaping sector on a silver platter.

Really? So, why is Big Tobacco attempting to derail the restrictions so vehemently?

Yes, every vape product must now be approved by the FDA and go through a rigorous, multistep application process that will cost hundreds of thousands of dollars. Many smaller vape shops and businesses can’t afford to file applications for all of their products, which means they may go out of business, leaving the market to be dominated by industry behemoths like Philip Morris.

However, these restrictions were imposed by the FDA to safeguard the health of people, not corporations. (For the record, the majority of e-cigarettes are created in China.) It is the Federal Trade Commission’s role, not the FDA’s, to guarantee that a market remains equal and competitive (FTC). The FDA’s duty is to ensure that the food, drink, smoke, vape, and other products people use do not harm children or kill adults without their awareness.

Some have referred to e-cigarettes as “lifesaving,” spreading the idea that anybody who switches to an e-cigarette would never go back to a regular cigarette. However, as previously said, 70-75 percent of vapers also smoke. And, like Big Tobacco, vape businesses have long promoted their poison to youngsters, resulting in lifelong nicotine addicts who would never have touched a cigarette otherwise.

Nicotine, which is included in e-cigarettes, is highly addictive. The majority of them also include formaldehyde (commonly known as embalming fluid) and diacetyl, both of which have been linked to lung illness. Hidden formaldehyde in e-cigarettes raises the risk of cancer five to fifteen times greater than regular cigarettes, according to a research published in The New England Journal of Medicine in January 2015.

Rather than lamenting the loss of vape companies or reflexively screaming “Overreach!” we should applaud the FDA for keeping these toxins out of the hands of our children, for preventing hundreds of deadly explosions, and for requiring the vape industry to prove the safety of its products before they hit the market.

The FDA has announced that it will regulate e-cigarettes. The announcement was made after the agency’s review of over 4,000 studies and reports. This is a good decision for public health, as vaping is not safe for everyone. Reference: fda vape ban update.

Why did FDA approve Vaping?

A: FDA is the Food and Drug Administration, a federal agency that regulates tobacco products. In 2007, they approved e-cigarettes for use in smoking cessation programs as long as manufacturers had valid scientific evidence of safety and effectiveness to support their claims. Thats what led them to approve vaping.

What are 3 reasons why e-cigarettes are unsafe?

A: E-cigarettes are unsafe for the following reasons.
1) They contain nicotine, which is a highly addictive drug that can cause addiction and withdrawal effects.
2) The levels of carcinogens in e-cigarette vapor are significantly higher than smoking cigarettes, making them an even bigger health risk to users who inhale these fumes on a regular basis.
3) Electronic cigarette liquids have been found to be linked with certain types of cancer because they often don’t account for chemicals such as nitrosamines or formaldehyde, two known causes of lung tumors and other cancers respectively

Why should FDA regulate tobacco products?

A: Tobacco is an addictive substance and has been known to cause serious health problems. These effects are caused by the inhalation of smoke, tar residue on cigarettes, as well as nicotine that remains in tobacco leaves after its been harvested.